A model car driven by KV260 and a USB camera mounted on the front.

Self-driving Car Based on Learning from Vision Demonstration

Self-driving Car Based on Learning from Vision Demonstration

A model car driven by KV260 and a USB camera mounted on the front. 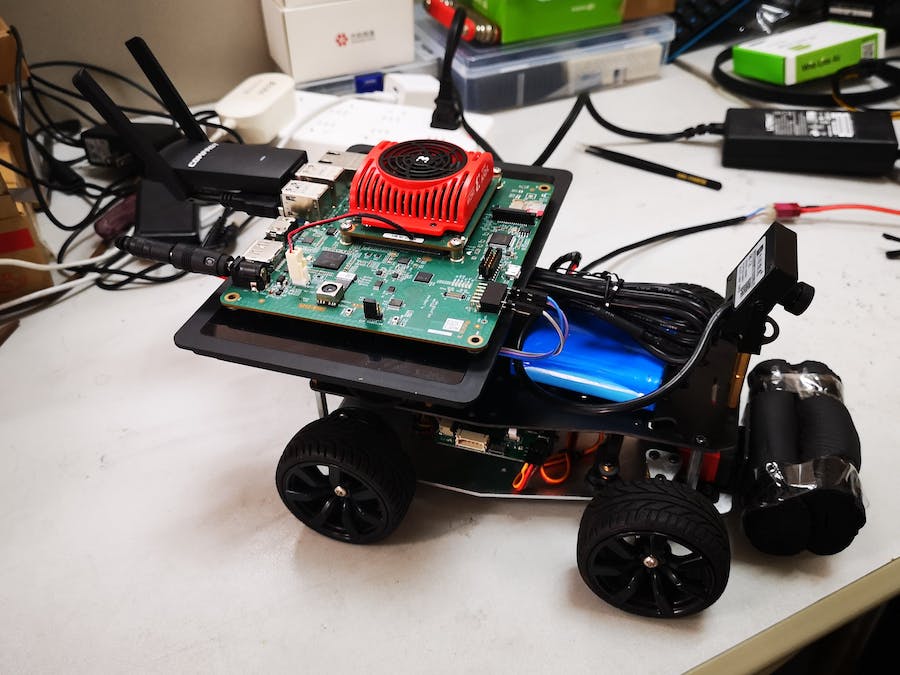 In many situations, we only want a car to be able to complete some specific tasks in a new scenario. In traditional self-driving tasks, a new walking or patrolling task is generally required to be coordinated by LIDAR, camera and other devices. Such solution requires tuning the parameters for each new environment and is not flexible enough. To be able to make the car adapt to new scenarios quickly, we got inspiration from Learning from Demonstrations. We perform imitation learning with flexible and easy-to-collect visual data and neural networks. With such approach, we only need to manually drive the car to collect image data as well as driving parameters as labels to build the dataset and train the network model. At application, the car reads the camera and then outputs the steering angle through the model to complete the task.

Just to clarify: You may notice the car shown in later pictures has a LiDAR mounted. Our model car happens to come with a LiDAR and it's unrelated to this project. We later removed it when shooting the final demonstration video.

Prerequisite: familiarity with Linux, a deep-learning framework of your choice and ROS (Robotic Operating System)

All the code used in this project can be found in the code section or this bitbucket repo.

The model car we used was originally equipped with a FriendlyElec NanoPC-T4 SBC, so we collected the dataset with that and trained the network before equipping the car with a KV260 board. You can skip to part 3 and setup KV260 with ROS first if your car doesn't come with a SBC.

We are using a supervised learning approach. And the most important part of it is a labeled dataset.

For this project, we'll drive the car manually, record the image collected by the camera in 640x480 resolution and label them with the steering angle input from us.

We assume that ROS is already installed on the SBC controlling the car. You can follow part 3 in this tutorial to create a KV260 image with ROS or follow the installation guide on wiki.ros.org if you are using a different SBC for this step.

Connect to the car via SSH and create our workspace:

The ROS driver for our car accepts standard AckermannDriveStamped message as the control input. In this part, we need three nodes: car driver, a keyboard controlling node and a USB camera node.

Copy the car driver to ros_ws/src via scp or other tools you familiar with, and download the other two by executing the following command on the SBC:

Step 2: drive the car and record some data

We first used a black carpet with white lane drawn on it as an example scene for proof of concept:

The lane carpet used in this tutorial

That's where the pictures in this tutorial comes from. We later drived the car around in our lab to gather a different dataset for the final result in our cover video.

In ROS, all nodes communicate with each other using messages. ROS comes with a utility called rosbag which can record all the messages sent by nodes in a timely order, and we'll use that for this step.

Open four ssh sessions to the car for various nodes.

First node is the car driver:

The second one is for USB camera:

The third one is for recording a rosbag:

Launch the keyboard control node in the final one:

Now you can control your car with the arrow keys on the 4th terminal. Put your car on the field and drive it around on the desired path:

After that, terminate the rosbag command with Ctrl+C and you'll find a {date}-{time}.bag file in ~/ros_ws. Copy this file back to your linux desktop and shutdown the car.

Step 3: extract the images and labels

Now let's go back to our Linux PC and extract our dataset. We'll be labelling each image with the last recorded steering angle using a python script.

Open a terminal and create a ros workspace:

Create ~/ros_ws/src/data_extractor/scripts/extractor.py with the source code provided in the code section and add executable permission to it:

Copy the previously recorded rosbag to ~/ros_ws and extract our images:

The dataset folder contains the extracted image and the corresponding labels are stored in labels.csv. We'll use these to train our neural network in the next part.

Part 2: Build and Train Our Network

In this part, we'll build our neural network steering the car. As a demonstration, we'll be using PyTorch to build a simple CNN for the lane carpet scene. You can pick any deep-learning framework supported by Vitis-AI and follow the corresponding Tutorial from Xilinx to create your quantized model.

My team mate later traind a ResNet18 for the lab scene in the cover video, but the procedure is the same so we won't duplicate it here.

We'll use Vitis-AI 2.0 in this tutorial. Let's first download the source code:

You can only use CPU for training but it'll be faster if a NVIDIA GPU is used instead.

Unfortunately the GPU docker is too big and Xilinx doesn't provide a prebuilt image for us. We need to build it following the README.md in Vitis-AI repository:

Step 2: code and train our network

The network used in this part is based on the PyTorch CIFAR10 Tutorial and the custom dataset is created following PyTorch Data Loading Tutorial. I highly recommend you to read through both tutorials to understand what's going on in the code provided.

There are three scripts used in this step:

Copy these created files and the dataset into the Vitis-AI directory and enter our container:

We'll be greeted with the banner below:

Activate the PyTorch envionment as shown in the picture, and execute our training script:

Vitis-AI runs AI inference with int8 while our neural network is trained with float point. We need to convert the model using tools from Xilinx Vitis-AI docker container. It first converts the model, then determines various model parameters with supplied input data and save the result for Vitis-AI compiler.

The script for quantizing the model is provided as quantize_xlnx.py. It's written based on the Xilinx example.

Call the script to get the quantized model:

We now have the quantized model in quantize_result/Net_int.xmodel. The exact file name will be different depending on the deep-learning framework you choose. This model needs to be compiled for the specific DPU we deploy on KV260. We'll do this after we obtain the arch.json describing our DPU.

In this part, we'll be building a custom PL bitstream with Vivado and Xilinx provided tcl scripts, as well as a PetaLinux image with all the software packages we need in later steps.

Step 1: create the base hardware platform

Our model car is controlled over UART, so I need to wire a UART to the pmod interface on the KV260. Xilinx has a tutorial on building a custom hardware design: Using Vivado to Build the Hardware Design. I'll just list the exact customization I made, instead of describing the whole process.

You can change it manually after cloning the kv260-vitis repository, or you can apply the provided patch on top of release-2021.1 branch.

Now let's open the project in Vivado. First, open the Vivado GUI, then run the following command from the Vivado tcl console:

Here's a part where the Xilinx tutorial doesn't mention: we need to disable incremental synthesis, otherwise Vitis will complain about missing files when building the overlay later.

In the Flow Navigator panel on the left-hand side, click Settings under Project Manager. In the pop-up window, click Synthesis under Project Settings:

Double click the ZynqMP in the center of the block diagram:

Click the UART0 as shown in the picture above. You'll be broght to the screen below:

Check the UART0 box and select EMIO in the IO field. Then click OK. You'll notice there's a new UART_0 in the ZynqMP block:

Right click on that and select Make external. I also decided to rename the external connection to uart_ps0 here. While at it, I removed the PL I2C and connected the PS I2C0 for the onboard camera, added a second PL uart for future use and incoporated this awesome temperature-controlled fan. Here's my final block diagram:

Click the '19 I/O ports' shown in picture and you'll find a port list below the main window:

tomverbeure on GitHub organized a package pin list here: kv260_pinout.py. We can find the pins we need and assign the ports to it, as shown in the picture above.

Now our hardware platform is ready. Click "Generate Bitstream" in the Flow Navigator and complete the steps, then click Export Platform to get our new.xsa file.

Then, follow the Xilinx tutorial to Create a Vitis Platform and Integrate the overlay into the Platform. I'll use OpenCV for image preprocessing later so I built overlays/examples/benchmark to incoporate a larger DPU in PL. After building, you'll find arch.json, dpu.xclbin and kv260_ispMipiRx_vcu_DP_wrapper.bit in overlays/examples/benchmark/binary_container_1/sd_card/

Step 3: write a device tree for our overlay

Since I'm using the smartcam base platform, I can modify the kv260-smartcam.dtsi for our use. Enable uart0, add the PL uart we wrote before and move the I2C definition from the PL node into the PS i2c0. You can find vai20-2uart.dtsi in the provided source code.

Install petalinux and create our base project:

Create a package for our overlay using files from step 2 and 3 following Add New FPGA Firmware:

Add ROS into our image following ROS 2 in Kria kv260 with Petalinux 2021.2. In Step 2 of this tutorial,, instead of adding ROS 2 Rolling, we add ROS Noetic, which means adding the following layers:

And in step 3 we create project-spec/meta-user/recipes-core/images/petalinux-image-minimal.bbappend with the following content:

To make other ROS packages available for selection, we add the packages we need into project-spec/meta-user/conf/user-rootfsconfig:

After that, open petalinux rootfs config:

select the packages we need in user packages menu:

We'll be building the ROS packages on the KV260 board, so we need to select all the -dev packages and packagegroup-petalinux-self-hosted from Petalinux Package Groups menu.

Write the generated petalinux image to the sd card and power on the board. After that, upgrade the BOOT.BIN following Boot Firmware Updates.

We now have our KV260 board ready. Install it on the model car and continue following the next part of the tutorial.

In this part, we'll finally get KV260 to steer the model car.

Run the following command to compile the network:

The output file are in the specified output path as shown in the picture above.

If you haven't done it, prepare a ROS workspace on KV260 as demonstrated in the step 1 of part 1.

Create our package for the deployment code:

And now it's the time for more code. We'll be running the model using the VART API. You can find the Xilinx sample code for using VART API from resnet50.cpp in Vitis-AI repository.

lane_dl_xlnx.cpp is our code for using VART API with ROS. Save it as ~/ros_ws/src/lane_dl_xlnx/src/main.cpp.

To build our code, we need to add it to the CMakeLists.txt in the package. The finished script is provided in the source code.

Here comes the most exciting part. Put your car in the previously trained scene and connect two ssh sessions.

In the first session, load the PL bitstream and start the neural network node:

Start the car driver in the second session:

The car should be following our previous driving path on itself!

Here's our car running on the lane carpet:

And you can try some different scenes and neural networks like what we've done in the cover video.