The affordable autonomous robot provides localization and mapping facilities and safely navigate the robot through the environment.

The affordable autonomous robot provides localization and mapping facilities and safely navigate the robot through the environment. 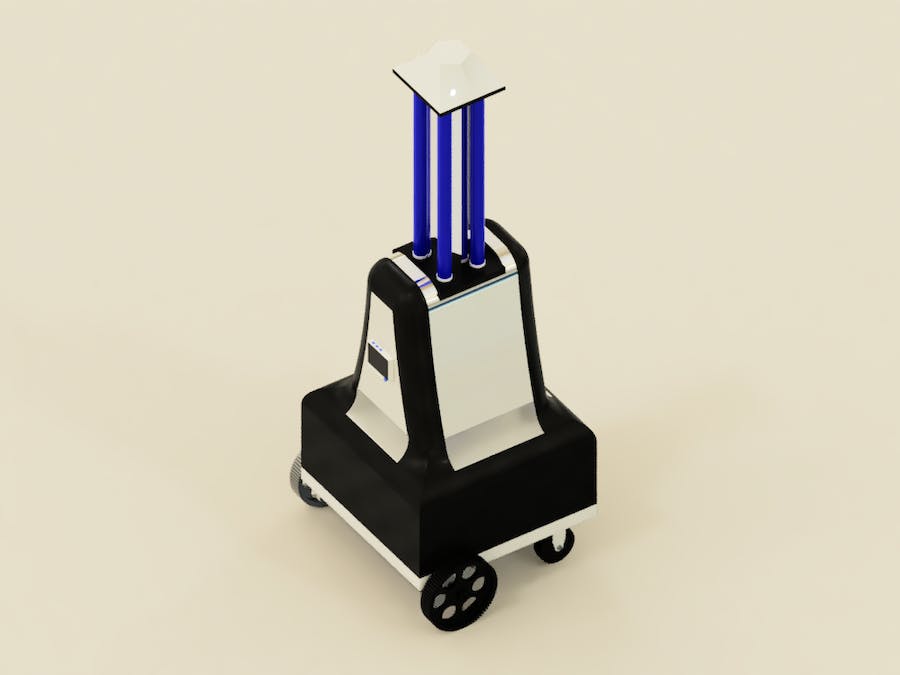 As we face a worldwide healthcare crisis caused by COVID-19, there's a large need for disinfection. This tutorial can be followed by anyone who is new to ROS all the instructions are mentioned so that you too can build an autonomous UV bot. UV-C in many parts of the globe for fighting the COVID-19. Currently, such units are either stationary or moved by humans. We improved upon that concept and built an autonomous, mobile unit that may move around lobbies and hallways to get into rooms for disinfection.

Our aim is to provide a simple tutorial to help people to make an affordable autonomous solution.

Three Lamps mounted on the robot would emit intense UV light at 240 nm wavelength, as per current medical device standards.

Our key innovation is in making this mobile with a state of the art LIDAR based SLAM technology that allows operation without exposing the workers to either the harmful UV light or infected rooms of patients. The mobility allows the disinfection of various corners and narrow alleys. We will be using a mobile app to communicate with the robot and the user can see the real-time status of the robot.

The bottom side can be used for other autonomous applications for surveillance, for delivery, etc.

Block diagram of the Robot

ROS (Robot Operation System) is a framework that facilitates the use of a wide variety of "packages" to control a robot. It acts as a middleware. Although ROS is not an operating system. ROS provides low-level device control, implementation of commonly-used functionality, message-passing between processes, and package management also provide packages range all the way from motion control, to path planning, mapping, localization, SLAM, perception, and more. ROS provides a relatively simple interface, and the ability to of course create custom packages.

Get the disc image

We downloaded the Ubuntu 16.04 Xenial with pre-installed ROS from Ubiquity Robotics. The link provided has all the steps to how to install it.

There are three ways you can control and code your robot.

The easiest way was to connect the monitor and keyboard to raspberry pi to work with code.

Something we would want to be able to do is to access the ROS communication messages from our laptop.

Spin a Linux machine with ROS Kinetic Kame. Either a virtual machine or a real machine. I used a VMWare-Fusion with Ubuntu 16.04 We will refer to that machine as the Observer machine. The robot is the Master.

You can follow this tutorial to set up the robot as amaster and Laptop as an observer machine.

Woo! Now both machines have internet and can communicate over SSH.

How does LiDAR work?

The basic principles for traditional LiDAR have been seen in time-of-flight-based distance measurement and triangulation-based measurement.

The ToF concept uses the delay time between the signal emission and its reflection to compute the distance to the target. The time delay is not measured for one particular beam’s round trip.

Instead, the phase shifts for multiple signals are used to indirectly obtain the ToF and then compute the distance. The triangulation method is used to measure the distance between the source and the obstruction.

We are using the YDLIDAR X4 for this build. The first step is to install the necessary drivers. The driver is a ROS package.

Test the lidar with

Visualize the scans in Rviz, by adding the topic /scan.

point cloud of my room.

In the following commands, substitute catkin_ws with the name of your catkin workspace.

In your Arduino IDE, install the rosserial library. Search for rosserial in the Library Manager and install it.

In a second Raspberry Pi terminal,

You will the messages.

We can install Hector -SLAM for mapping. We found this video by Tiziano Fiorenzani and the official resources on the ROS website helpful for setting Hector-SLAM up.

Clone the GitHub repository to your catkin workspace. Navigate to the src folder and run

We need to make a couple of modifications to the Hector SLAM tutorial files in order for them to work with our setup. We first take note of the transformations available to us on the \tf topic, and the reference frames they use.

So we see that we have only two frames. Namely /base_footprint and laser_frame. We will update the file

Find this line and change from

At almost the very bottom of the file, change from/to:

This should do the trick! Try it out!

You should be able to see the results in Rviz. Choose the /map topic to visualize the map that was created.

We now want to create a ROS package that would allow ROS communication to move the robot in the world. Again, Tiziano Fiorenzani has a great video explaining the basics of what we are doing here. In a nutshell, we want to make a subscriber node that would run on the Arduino, and listen to the topic /cmd_vel. We would want to begin with sending commands from the keyboard to the robot.

To see what this topic is all about, run

In another terminal, run

to see that this topic publishes the structure Run

Let’s create the ROS node on our Arduino. We would want to map values in percentages (that we get from /cmd_vel) to the range [0, 255] that our motor controller understands.

We are uploading the code to Arduino and this will allow the robot to be controlled forward, backward, and sideways.

Check out the GitHub repo for full code.

We can control the robot from our laptop now! In separate terminal instances, run the following:

Control Arduino with the keyboard.

Creating a launch file is pretty simple, and can be done following the documentation on ROS.org. In our case, we end up with the following launch file to launch all the necessary nodes for keyboard teleoperation.

And open Rviz from another Linux machine, if possible or in the rapsberry pi monitor to see it

Now, as you’ll be driving around the space (slowly! We want the map to be built accurately, so no need to give it a hard time doing so.) you’ll see a map starting to be built in real-time, in Rviz. The lighter colors are empty space, and the dark ones are obstacles.

When you think your map is sufficiently good, run the following:

Now it is autonomous and can drive on its own, and sense its environment. I will be updating this Github repository with code for other applications too.

We were deeply inspired by this project https://github.com/yoraish/lidar_bot.

For navigation, this tutorial was a great help.

We are using the Wio terminal which has many inbuilt sensors. The Wio Terminal is a SAMD51-based microcontroller with Wireless Connectivity supported by Realtek RTL8720DN that’s compatible with Arduino and MicroPython. It runs at 120MHz (Boost up to 200MHz), 4MB External Flash, and 192KB RAM. It supports both Bluetooth and Wi-Fi providing the backbone for IoT projects. The Wio Terminal itself is equipped with a 2.4” LCD Screen, onboard IMU(LIS3DHTR), Microphone, Buzzer, microSD card slot, Light sensor, and Infrared Emitter(IR 940nm). Really cool features in one single device right. In our case, it acts as a wifi access point and we can connect the raspberry pi and our Virtual machine to a single access point. The inbuilt display will show the time and other messages.

We are using the IMU sensor, inbuilt temperature sensor, and buzzer in the WIO terminal to detect a collision, overheating and it alerts through buzzer as well as our mobile app.

We are adding the UV light sensor to detect and get the feedback if UV light is ON or OFF.

It uses a UV photodiode, which can detect the 240-370nm range of light. The signal from the photodiode is a very small level, in the nano-ampere level, hence an opamp to amplify the signal to a more Manageable voltage-level.

Use this basic code to test it

There is a thermistor. There is also a very basic chip inside that does some analog to digital conversion and shows a digital signal with the temperature and humidity. The digital signal is fairly easy to read using wio terminal. Here we are using it as a safety feature. The internal temperature of the robot is being measured here. If it is getting really high the complete system will shut down.

We are using 20w unit 2ft Sanyo Japan UVC lamp with a full assembly which provides an area coverage of 70 sqft which is sufficient for our application. You can refer to these articles to find out more regarding the disinfection properties of UVC light.

PIR sensors allow you to sense motion, almost always used to detect whether a human has moved in or out of the sensors range. They are small, inexpensive, low-power, easy to use, and don't wear out But it is a little inaccurate in our case we have to use Contact-less Infrared Thermopile Sensor with OpenCV to get more accurate data for human detection. We are working on the Thermopile sensor we will update in this tutorial really fast.

We are running the access point in the Realtek board and sensors are working from the wio terminal.

You have to burn the bootloader to get access to the Realtek board in Wio terminal, follow this link to do it.

This is the code we used.

In the wio terminal run this code to get access to the inbuilt sensors, PIR, UV sensor and to control the UV lights by relay.

Communication with Realtek board and Wio terminal board

Use this code to test the communication

The initial plan was to use two NEMA 34 motor with 85KGCM Torque and use two DM860A2 motor drivers. But one of them was not working properly and so we changed our motors and drivers.So in this project, we will be using four wiper motors and two BTS7960 IBT2 motor divers instead. These motors can carry a sufficient load of our robot and control and coding is simple too.

We have used Aluminum for fabrication for the case since it is lighter.

Holds a mirror to reflect light and holds the UV light.

It holds the Motor, Battery, and Inverter.

The middle part holds the Wio terminal and the safety circuits.

Motor wheels were cut using Lathe and were connected to the motors and have a diameter of 12 cm.

motors connected to the wheel.

How to use a robot?

We have used a UV application to switch on and of the LED and to show the other status like UV bot is down or UV bot is charging. You can download the app from here.