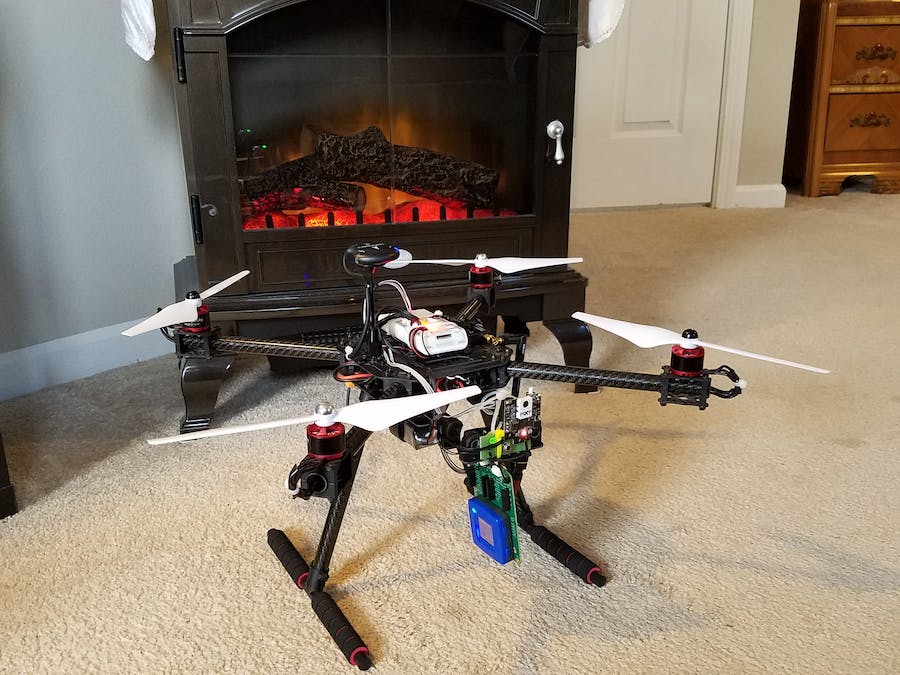 The flight course drift angle due to wind can be calculated by the drone controller and reported in the flight telemetry along with the position of the drone and temperatures measured along the path. With multiple drones a map of the situation can be quickly developed. A tactical package release mechanism will be developed for delivering tactical packages reliably.

Start with the HelloSky example

Start with the hello sky example to learn the basic information needed to add a command to the drone that can be sent via the MavLink console in the QGroundControl program. If you do this, then the following steps to add the Melexis temp sensor and Pixy Cam 2 will make much more sense, and the whole process of building the drone software will be more enjoyable.

Collect the example code from a GitHub repository for Pixycam2.

get Pixy Cam2 code from repository

I am using MCUXpresso as my code building environment, if you use a different environment to build the PX4 code you will have to do some of these steps in a slightly different way.

Create a pixycam directory, in the src/drivers directory of the firmware project. We need a directory to put the pixy cam code that we just collected from the repository.

Import the pixy cam code into the pixycam directory using File->Import from the File dropdown menu.

Select the directory where the pixy cam files are located.

Select the directory to import files from

Select the destination for the files to be imported.

You will need to switch your PixyCam 2 to use the I2C interface. Use the PixyMon program and go into settings to select I2C as the communications interface.

If you have a cable for the Pixy Cam 2 to FMU I2C/NFC connector now is the time to plug it in, If you do not have such a cable you will need to fabricate such a cable.

After the firmware is programmed into the flash of the FMU, start QGroundControl and get to the MavLink console. Type help and find the pixycam command that has just been added.

Type pixycam to start the command.

The output of the pixycam command

I changed the pixycam command slightly because it had a "forever" while loop. Now it does getBlocks only 100 times and then quits the command.

I followed the directions here to train Pixy Cam 2 to detect fire colors.

The PixyMon program configuration settings that produced this result:

Tested with a fake fireplace.

The process of adding the Melexis demonstration code is so very similar to that of adding the PixyCam code so I am not going to give the same level of detail to the instructions to add the Melexis temperature sensor code.

I have tested the Melexis 90614 temperature sensor code in PX4. Unfortunately the FMU code repository I picked up only looked for compass #0 on I2C bus 2 when compass #0 is really on I2C bus 1. This caused pre-flight checks to fail because compass #0 is missing, keeping the drone from being armed for flight. To fix the problem of the missing compass #0:

At first, I really thought the Melexis Demo code was the difficulty, but this file problem was the real cause of the missing compass problem.

This data was taken with my hand close to the Melexis temp sensor. The Melexis sensor sees a 27 degrees C average temperature in the field of view (FOV).

Why use a companion computer?

In the FMU code, the NuttX operating system making sure that all the tasks, especially the flight control tasks, are getting done. But suppose we wanted to add some special code and we were uncertain how much of a processing burden we were going to create for the FMU. Will it mess up the flight control tasks? We would also like to keep the different application functions operating on separate hardware specifically optimized for that application function. For instance, when a new better FMU comes along, we don't have to change all of our software that contains our special code, because the FMU hardware changed. The Rapid IoT prototyping kit brings us extra computational power in a very compact size and consumes much less power than some other companion computer hardware solutions. It is optimized for IoT and this is great part of the future of this project.

I found that the "Hello World!" Rapid IoT example project did not compile in MCUXpresso 11.0 but does compile in MCUXpresso 10.2.1. Into the "Hello World!" demo the MAVLink project is inserted into the Rapid IoT firmware. See this Rapid IoT MavLink demo weblink for the process of building the demo code. The HDIB shown uses a cable to connect to the IR/TLM2 connector of the FMU for the companion computer serial connection.

A cardboard box is re-purposed to deliver fire retardant. I am testing with Nerf ammo since it is much easier to clean up than a powdered fire retardant.

I am building a wooden lever for opening the box. The chopstick glued across the bottom of the box is used with rubber bands to make sure that the box closes nicely. I am using a very small 9 gram servo to open the box. I want to keep the fire retardant delivery system very light in weight.

The battery holder slides to the back of the drone to compensate for the weight added to the front with the Rapid IoT companion computer, Pixy Cam2 and the Melexis 90614 temp sensor. I have one of the supports firmly held in the center by opposing strong cable ties. The battery pack and holder have velcro fasteners, in addition to the belt-like fastener, so that the battery cannot slide in the battery holder. I want to be very sure that the center of gravity of the drone cannot shift during the flight.

A lifting point for various package delivery systems will be tied into the front brace of the battery holder now that it has been prevented from moving.

As the sun set on the final day of the contest I decided to test the fire retardant delivery system. It was windy so the flight conditions were not very good, but I gave it my best try. The drone is not damaged, my pride as a drone pilot will recover. It is best to do this sort of test on a calm day.

I have shown how to include software for thee subsystems, PixCam2, Melexis 90614 temperature sensor and Rapid IoT as a companion computer. I also did a quick build of a fire retardant delivery subsystem. Now the work really begins to create a well thought out system based on these subsystems.

I used Velcro and cable ties instead of the double sided sticky tape to secure the FMU, telemetry modem and ESCs. This provides more flexibility as different tests are perfomed on the drone as a system.

Manage the balance of your finished drone carefully. A lower center of gravity may help the flight characteristics of your drone.