Use the cursor to change the colour of NeoPixels. Create light experiences using visual software like Photoshop or After Effects.

From Pixel to NeoPixel

From Pixel to NeoPixel

Use the cursor to change the colour of NeoPixels. Create light experiences using visual software like Photoshop or After Effects.

This animated image shows how the light of the NeoPixels is influenced by the position of the cursor.

When you want to prototype light behaviour that is beyond the blinking LED, things start to become tricky. You can of course 'hardcode' the behaviour with some for-loops, arrays or a sequence of instructions; but it is a tricky process and is hard when you want to explore; sometimes you don't really know what would look good, or would be understandable.

What if you can just hover over a colour or colours, and you would see how that would look in your prototype or project. Also by moving faster, or slower, you can see how changes and colour transitions would look. Now you can also use more visual-based software, like Photoshop, After Effects, Figma or Sketch.

This project contains two pieces of code; one to capture the current location of the cursor and find out what colour(s) it is pointing to (in Processing). And one that is connected to the Arduino that takes the RGB colours from the screen and sends it to the NeoPixel(s) (of course with a bit of tweaking; servos and other devices could also be controlled in this way).

Especially when you want to sync sound experiences with the light experiences or on-screen animations these examples can help out; in the course sound design at Umeå Institute of design this code has been used to do video prototyping or make experience prototypes (for user-testing or presenting); the sound can be part of an After Effects project while you can also influence the light behaviour (by manipulating visual effects on the screen).

Movement is more than the shortest way from A to B

Here is an example of the light guide exploration of Ove by Iris Ritsma, Ivan Kunjasic, Ricardo Verheul and me (Geert Roumen) where it was used to explore the light guide behaviour and see what intensity and colour would work best. In this case, the final experience was hard coded based on the experience that was explored and worked.

A picture showing the After Effect interface on one side and the final prototype for Terra on the other side.

Here is an example of how in the terra project by Manuel Hess, Patrick Krassnitzer & Ferdinand Aichriedler the code was used to sync and control the light and sound experience of the earthquake alarm. In this case, the final experience was with a laptop that was looping through an After Effects video with sound that was audible through external speakers; The Processing sketch was sending it to the prototype which contained NeoPixel LEDs to show the experience.

Steps to make it work

The Arduino code is probably the most interesting part to change; so three values are being received from the Processing sketch. r, g and b these can be used in any way to control anything; you could for example use analogWrite(10,r); to write the red value to a pin 10. You could also control the speed of motors, angle of a servo or trigger a solenoid at a specific moment; the sky is the limit. If you prefer blinking LEDs and abrupt motor movements you can also just use digitalWrite(13,r); now the LED connected to pin 13 will be on, except when your hovering over a black; or non-red pixel... Just remember to set pin 13 as an output pinMode(13,OUTPUT);

The protocol is that first an S should be received, after that, it is reading for the bytes of R G and B. It's not exactly watertight this way since the colour value 83 is also perceived as an 'S' by Arduino, but this shouldn't be a big problem...

In processing it takes a little screenshot of the current pixel at the cursor position; it doesn't see the cursor itself. You can, of course, change that aswell to a fixed position; if you want to be able to still use the cursor.

Sometimes you don't want to just send one colour, but you want more of an animation. This is possible by just sending more pixels at the same time. Both sketches need a few adjustments...

A little robot made of two servos waving you goodbye, also made by the After Effects, Processing, Arduino flow.

Sometimes you don't want to send values from the screen to the Arduino, but also influence what is happening on the screen using Arduino. I've made several examples that could help you with this. 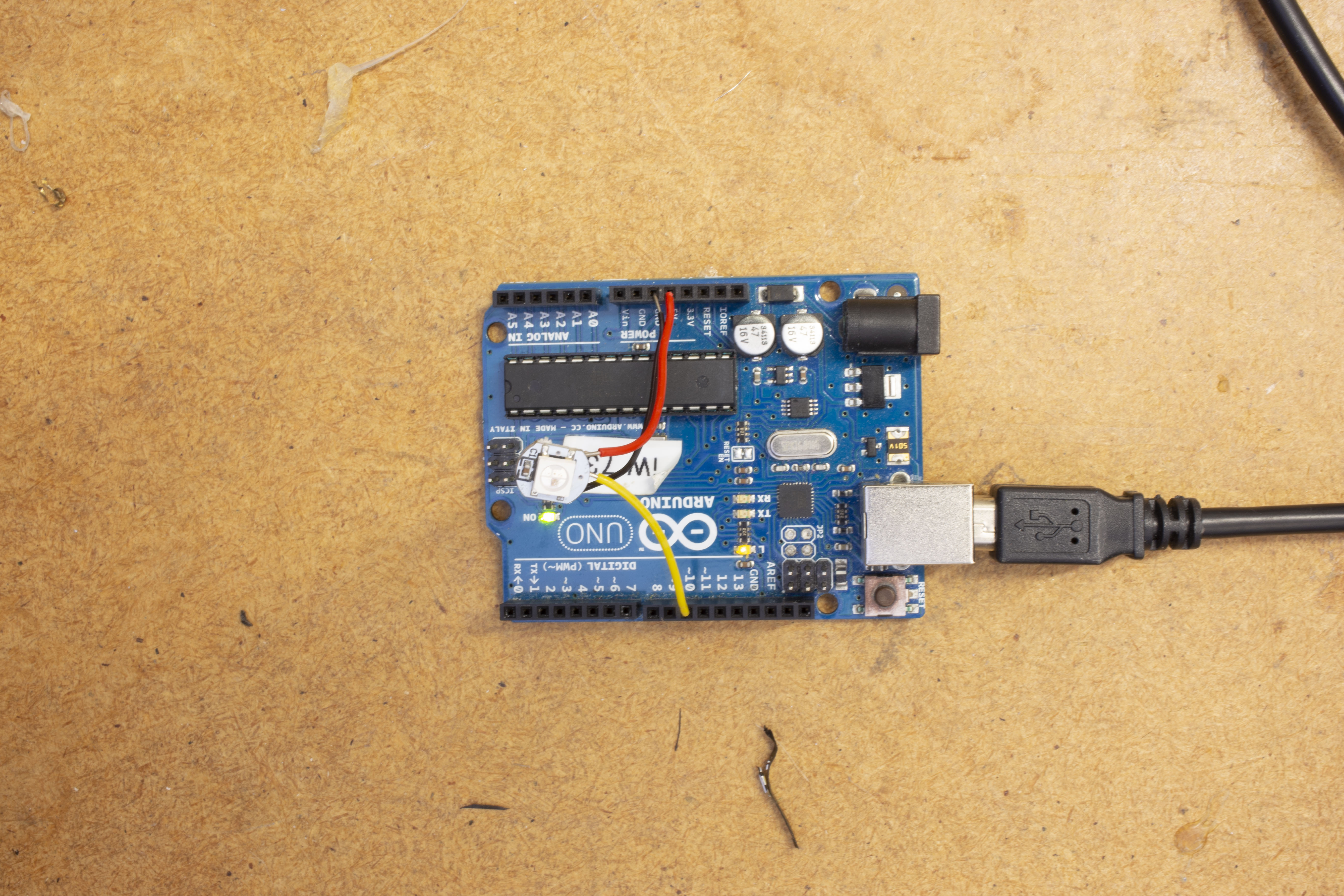 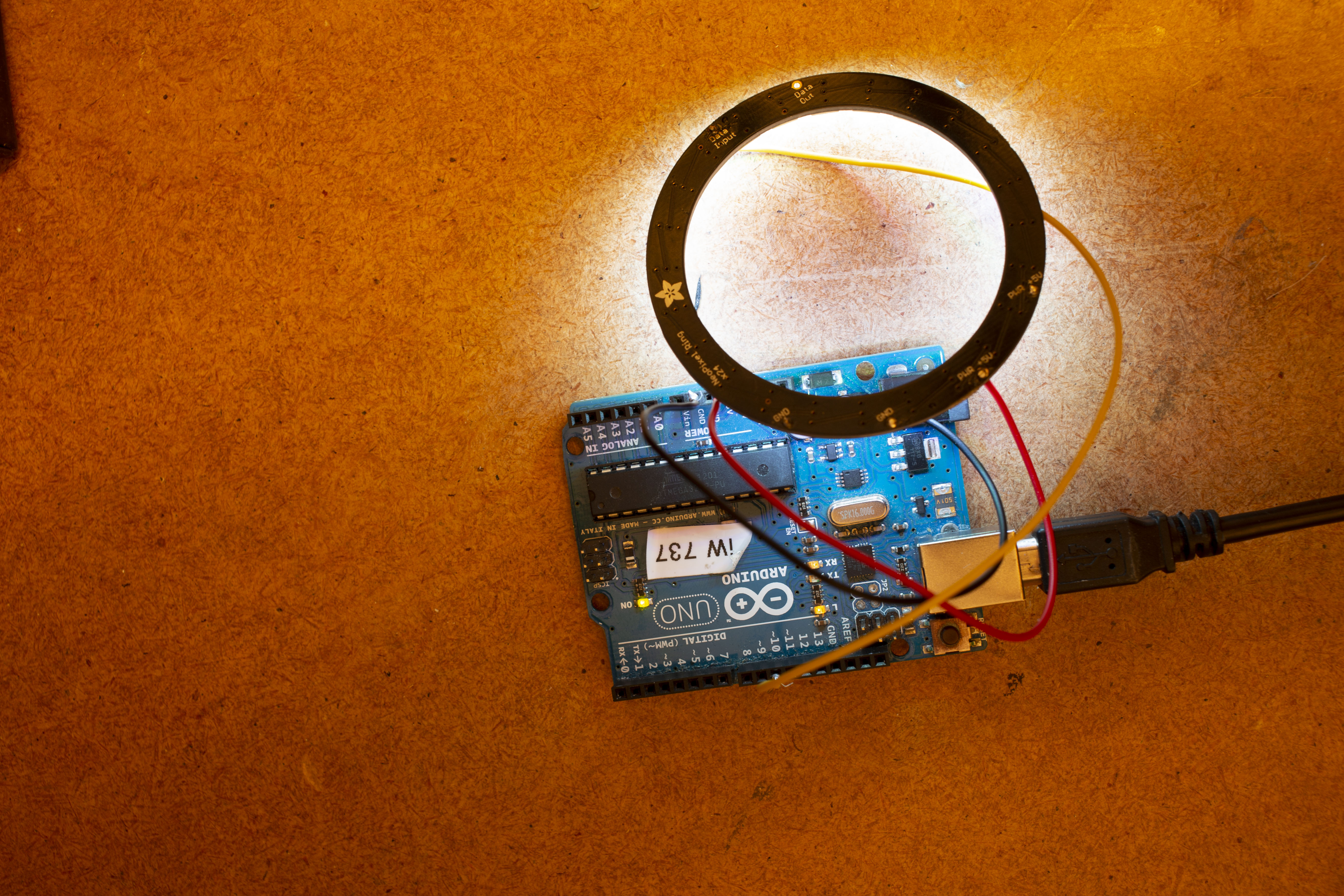 6 projects • 7 followers
I’m a maker and interaction designer, bridging the digital and physical world. and make prototypes and do research in a playful way.
ContactContact