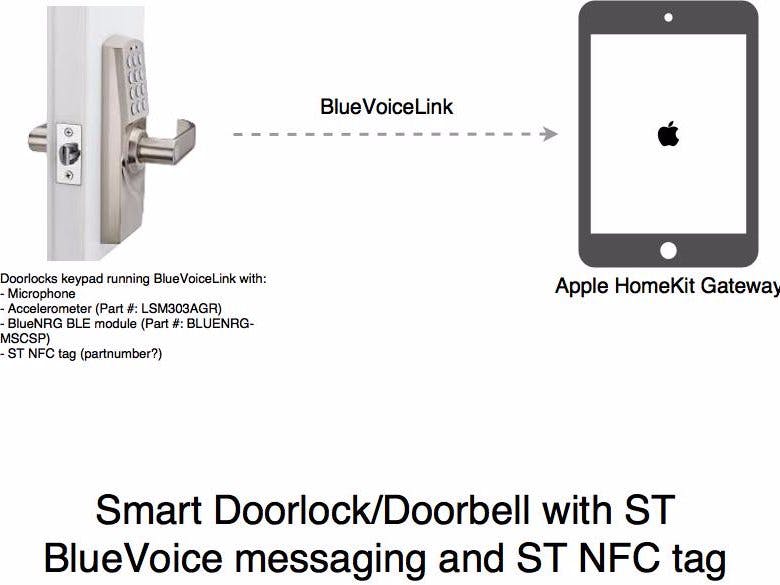 Airbnb and Uber are two new disruptive services for today's "Shareconomy" business model where the customers have shared access to a private property.

Airbnb guests, as well as regular visitors to your house (e.g. caregivers, maid services, dog walkers, FedEx/Amazon delivery personnel, etc.), would benefit from time-saving, convenient services if your house has keyless smart door lock installed (e.g. august.com and nouslogic.com smart door locks). These smart locks would send notifications to the homeowner's phone when any of the visitors' temporary access code was pressed on the keypad (or on the visitor's phone screen) to unlock the smart door lock. This project based on SensorTile microphone/accelerometer and also ST NFC (near-field communication) tag would add three additional useful features to existing smart door locks to form an integrated Home Access Platform as follows:

1. Low-cost voice messaging to enable the visitors to leave a voice mail or, with a future system upgrade, interactively communicate with the host via two-way half-duplex ST Bluevoice-link supported in SensorTile. This enables the homeowner to identify who is at his door before issuing access code to his home.

2. Motion-based notification to the homeowner's smartphone using SensorTile's accelerometer integrated on door lock PCB (when there is motion detected on the door.) In addition to lock/unlock push-notification (which is triggered when a correct shared access code is used to unlock/lock the door lock), this motion-based notification helps to detect whether there's forced entry or whether the door is actually swung open or closed. These two independent events/notifications (open/close vs. lock/unlock) could give the remote homeowner much more knowledge on what's going on at his house front door.

3. ST NFC-based smart doorbell, which, via the visitor's NFC reader-equipped smartphone (such as iPhone 7, Samsung Galaxy S5 and above) can send notifications to homeowner's phone when the visitor taps his/her phone on the NFC tagged doorbell. Such services are currently supported in NousLogic reachme.me Doorbell notification and chat service

For demo purpose, this project simulates these 3 additional features for an existing door lock system (such as NousLogic.com or August.com doorlock) by using ST SensorTile kit (with built-in microphone and accelerometer) and ST NFC tag, and iOS app running on an iPad (more on this Apple HomeKit iPad app later)

Let's have a walk through the system diagram below to understand how these 3 features work in this Smart Home Access System:

Refer to block diagram (in schematic section) which consists of:

** Door lock, (in interior side of house's front door),

** Keypad (on exterior side: this keypad transfers visitor's entered access code to the DoorLock over BLE Bluetooth low energy)

These are the basic hardware components in an Apple HomeKit-enabled door lock. In the next paragraphs, we will describe what it takes to add the three new features.

To add voice-messaging in a very cost-effective way, we include a microphone (and an optional speaker for future 2-way audio expansion; ST accelerometer LSM303AGR is also added to support #2 feature) and reuse the existing blueNRG-MSCSP Bluetooth module in the keypad to run bv-link voice firmware (supported in STMicroelectronics FP-SNS-ALLMEMS1 3.2.0). By reusing ST BlueNRG instead of adding another WiFi module (which is typically used to support voice streaming), the system cost is highly optimized.

Similar to ST BlueMS iOS app which streams audio from SensorTile's microphone to the iPhone, our system uses a similar app to run on iPad (which also runs HomeKit Home app) to receive the visitor's audio streamed from SensorTIle' microphone/blueNRG module on Keypad at the front door. This audio buffer can be streamed in real time to homeowner's phone via NousLogic cloud server or sent as a voicemail file.

In a future upgrade, this platform can also support audio streaming in the reverse path (from remote homeowner's phone to the keypad's speaker) to form a 2-way half duplex audio system

VIDEO DEMO FOR FEATURE #1: this video shows the doorlock' Keypad (which uses SensorTile's accelerometer, microphone and bluevoice Ble module; and ST NFC tag) together with an iPAD running Apple HomeKit to support remote control of the doorlock . BLE voice streaming from Keypad/SensorTile to iPAD BlueMS app is shown

ST accelerometer LSM303AGR + motion signal analysis firmware on either Keypad or Door Lock itself can detect when the door is moved (opened or closed) and send door open/closed push-notification ( and/or door locked/unlocked notification) to remote homeowner's phone via the HomeKit protocol-enabled iPad and Apple iCloud server. These two independent events/notification (open/close vs. lock/unlock) could give the remote homeowner much more knowledge on what's going on at his house front door.

A Smart DoorLock system should be bundled with a Smart doorbell service to "ring" the homeowner when somebody is at the door pressing on the doorbell. We propose a low-cost software-based doorbell service using ST NFC tag (near field communication) which, when tapped on using the visitor's NFC-enabled phone, will use the visitor's LTE service to send push notification to homeowner's phone to start a chat service between the 2 parties. Such new NFC capabilities are added to NousLogic ReachMe Smart Doorbell app which originally uses QR code (scanned via the phone's camera). You can download and install this app from Apple Appstore and Google Playstore. the app name is Nouslogic ReachMe QR code

This video shows a software-based Smart Doorbell service that is initiated when the visitor's NFC-enabled smartphone is placed near an ST NFC tag on the door lock's Keypad .

This ReachMe Doorbell service is courtesy of NousLogic company

Here are some codes to demonstrate the main functions of features #1 and #2:

2. Unzip the contents of file into a folder. From now on, we will call this folder "D:\ALLMEMS1".

3. Locate the file "ALLMEMS1_ST_BL.bin" in folder "D:\ALLMEMS1\Projects\Multi\Applications\ALLMEMS1\Binary\STM32L476RG-SensorTile". Then, flash the firmware onto the SensorTile using the NUCLEO-F401RE and the software STSW-LINK004 with the following set up with the CN2 jumpers removed:

A SensorTile with a correctly flashed firmware would resemble this:

More details about this process can be found here.

For the app BlueMS, either on Android of iOS (whichever one is your favorite, your can download Android Studio here and it doesn't require a macbook), in the "AudioRecorder.java" or "W2STAudioDumpController.swift" respectively, do as you please with the audio recorded. We just save it as an audio message and notify the user.

For illustration purposes, here, we are using single tap in FP-SNS-ALLMEMS1 and a modified version of Blue-MS app (code shown above that support single tap detection and the resulting notification message on the owner (remote) phone). As this is still work-in-progress, in a future code upgrade, we will replace single tap with a more complex algorithm to detect door being swung open or close. The setup for this feature consists of SensorTile (for processing single tap motion), HomeKit enabled iPad (acting as a gateway), Apple iCloud server (to send the notification), remote owner iPhone running Apple Home app (to receive the notification).

Step 1: Run the modified app on iPad and pair the iPad with the SensorTile.

Step 2: Shake the SensorTile to simulate door open or close.

Step 3: Via the iPad and iCloud, remote home owner's iPhone will receive this open/close motion notification (see images in previous section). Note that the other lock/unlock notification is also sent via this mechanism and data path.

Step 2: If you already owned a ReachMe QR code tag, read and follow the four steps in the following quick-start guide. Otherwise, you can create and print your own QR tag by downloading the "NousLogic ReachMe-QR" app for iOS or Android and follow the instructions in section 2 of this link.

Step 3: Now, you have created and configured your own ReachMe QR code tag. You can play with it by running the ReachMe QR app and scanning it using your phone camera. If you correctly configured your tag then upon scanning it, you will get the following webpage screenshot (with the door bell) on your phone. Right-click on the URL field of the webpage to copy it. You should see a URL similar to the following: https://reachme.me/r/t/t6Q2f956A3c4T904/MLkwqFrYTuCv7NW9cUtm1506067414.

See step 4 below to write this webpage's URL to your ST-NFC tag.

Step 4: Download and install the app NFC Tools onto your Android phone that is equipped with an NFC reader such as a Samsung Galaxy S5 and above. Using an ST NFC tag similar to the one shown below (ST25TA), launch the NFC Tools app and tap your phone onto the NFC tag, you should see the NFC Tools screenshot below, make sure that in the field "Technology available", "Ndef" format is shown. If so, now you are ready to write the above URL onto the NFC tag by selecting the "WRITE" tab on the app and pasting your URL into the field.

Step 5: Once the write step is completed, now you are ready to use your ST NFC tag for the same smart door bell service that you did earlier with QR code. 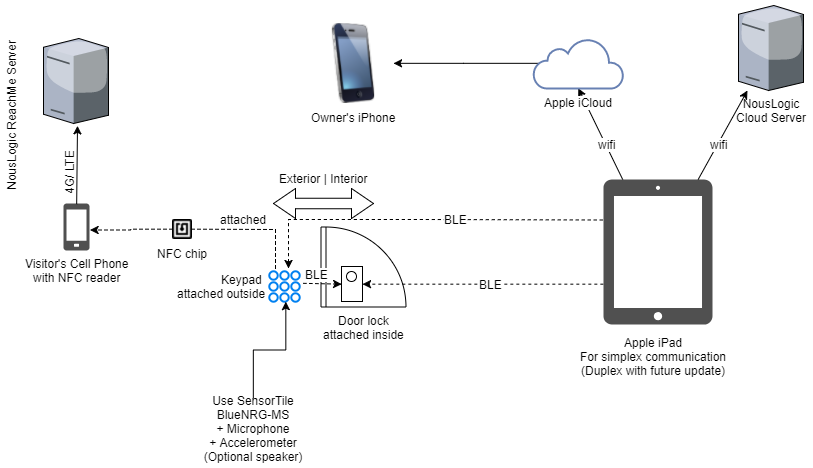 0 projects • 0 followers
ContactContact
Thanks to NousLogic Inc. for their door lock and ReachMe.Me doorbell service.