This project is a proof of concept for a wearable fall detector based on the MAX32620FTHR, and the ST LSM303 e-compass.

This project is a proof of concept for a wearable fall detector based on the MAX32620FTHR, and the ST LSM303 e-compass. 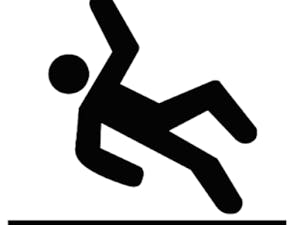 Falls represent one of the leading causes of deaths and injuries in the elderly population. Review studies show that more than one-third of home-dwelling people aged 65 or above and two-thirds of those in residential care fall one ormore times each year. Most elderly people are unable to get up by themselve safter a fall and it was reported that, even without direct injures, half of those who experienced an extended period of lying on the floor (>1 h) died within six months after the incident. Falls can occur on level surfaces, mostly in living rooms, bedrooms, kitchens, bathrooms, or hallways and bare serious consequences for the health of the subjects and financial cost for society.

Fall detection aims at decreasing the damage caused by falls. Wearable sensors such as inertial sensors play a key role in fall detection compared with othe rmethods such as using camera. Considering the constraint of energy consumption and battery size, wearable fall detection products require a simple algorithm with less computational complexity. The wearable sensors that have been used in fal ldetection include tilt switches, accelerometers, gyroscopes, pressure sensors, and microphones. Among these, an accelerometer is considered one of the most effective and commonly used devices. Existing fall detection studies have beenconducted with different sensor positions. With a single wearable sensor, themost common placement is the wearer’s waist.

Methods for fall classification can be in general categorized into threshold-based, rule-based and machine learning approaches. Simple thresholding, however, is not suitable to detect differenttypes of falls. Most automatic fall detection systems rely on the rule-based approach. The main concept is to construct a set of rules for detecting ADLs (Activitiesof Daily Living) or falls based on thresholds of one or more features. The common ADLs include standing, walking (level), walking (up/down stairs), running/jogging, jumping, sitting down on chair, getting up from chair, lying down on bed, getting up from bed, and picking up object from floor. Commonly used features include mean, standard deviation, sum of vector magnitudes, and tilt angle. Mean and standard deviation can be calculated along each of the three axes (x, y, and z). Means are informative for detection of static activities (e.g., lying, sitting, and standing), while standard deviations are informative for distinguishing between static and dynamic activities and for classifying dynamic activities (e.g., walking, running, and jumping). Other informative features for classification of static activities include the angle between the device and ground and the angle between the device and the gravitationa lvector. The later can be represented in various forms, namely, tilt angle, inclination angle, orientation angle, sagittal angle, lateral angle, and device orientation change.

Sum vector magnitude has been used in most studies for detecting abnormal signals. The highest peak during the sudden change of this value is used to indicate a fall impact.

This project is a proof of concept for a wearable fall detection device based on the MAX32620FTHR rapid development platform, and the ST LSM303 e-Compass with 3D digital linear acceleration sensor and 3D digital magnetic sensor. The simple thresholding method is currently available in most accelerometers, including the LSM303, in the form of the free fall detection interrupt. By setting an event detection threshold (a low g value in any axis), and event duration, the user calibrates the accelerometer to generate interrupts in the event of free fall. We use the free fall detection interrupt feature of LSM303, as a simple thresholding method optionally enhanced by tilt calculation and sum vector magnitude, in order to keep the setup simple, fast, and energy efficient, suitable for a wearable device.

A typical fall behaviour is shown in the above diagram (AnalogDialogue, Vol. 43, July 2009), where a period of low g (FreeFall), is followed by a high g period (impact), and then possible inactivity (if the subject remains motionless).

The idea in this project is to setup the LSM303 to generate a free fall detection interrupt and subsequently check the overall acceleration value (Sum vector magnitude) against a preset threshold to determine an impact event. The free fall and impact events would thus characterise in most cases a real Free fall event as opposed to an ADL. If so wished, the algorithm can be further enhanced by calculating tilt angles of the x, y, z axes from the magnetic field values.

Initial State (Board resting on table).
Status after board reset and no movement involved.

The setup of the LSM303 is as follows (all register settings refer to the AGR version. Other variants need sligh tmodifications. All settings are implemented by modifying the mbed LS303 library file):

Interrupt 1 is enabled and is triggered by a threshold value of less than 0.2g at any axis, for a duration of more than 50ms.

In the event of a free fall interrupt generated by the LS303, the MAX32620FTHR calculates the current overall acceleration value (Sum vector magnitude) as Atotal=SquareRoot (Ax*Ax+Ay*Ay+ Az*Az) and compares it to a threshold TH currently set at 4g. If Atotal exceeds TH, then a Free Fall Event is declared by switching the LED of the MAX32620FTHR from GREEN to RED.

The code provided offers ample room for experimentation with various threshold values, and the algorithm can also be enhanced as already mentioned, with axes angle calculations in order to determine if the device has been significantly displaced.

The obvious extension to the project is the addition of a BT module through which the MAX32620FTHR can communicate the ALERT to a smart phone and from there to the cloud, for a complete IoT Fall Detection monitoring solution. 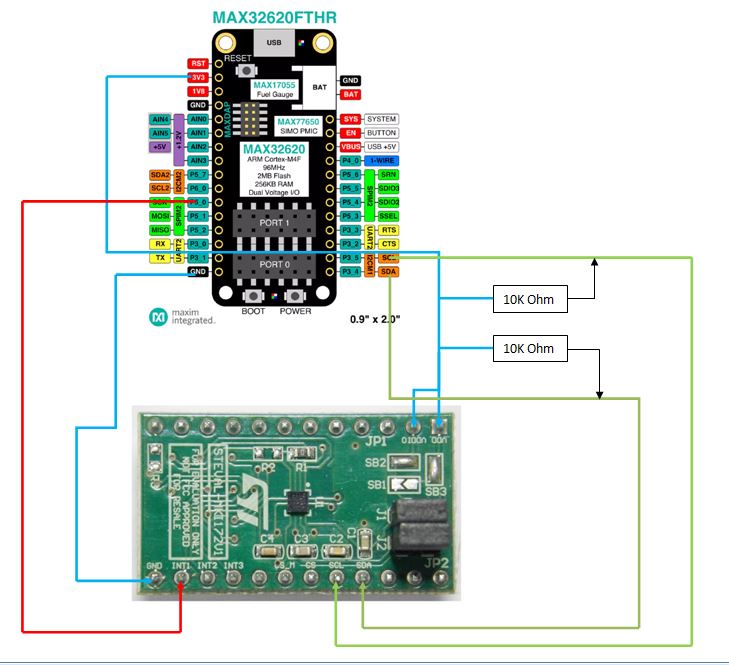