PixelPad Indian is an electronic badge based on an ATmega32U4 microcontroller, which comes with many built-in features!

PixelPad Indian is an electronic badge based on an ATmega32U4 microcontroller, which comes with many built-in features! 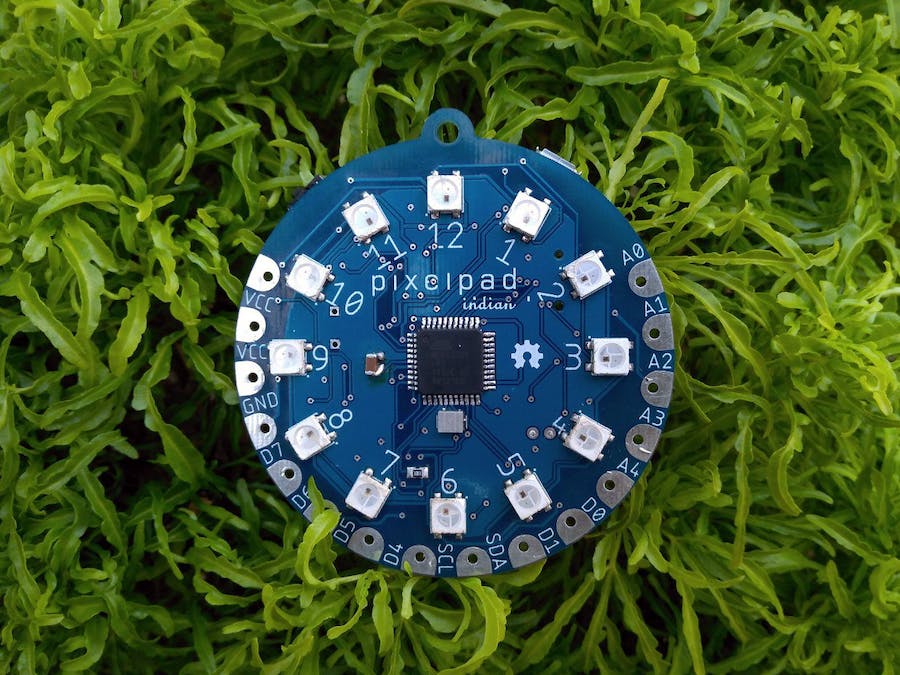 PixelPad is an electronic development badge based on an ATmega32U4 microcontroller and comes with a lot of built-in features. The PCB art is inspired by Indian culture, arts, and drawings. Using PixelPad, you can either use it as a wearable development board like the Adafruit Playground Express or LilyPad, or you can use it as an electronic badge!

The features of PixelPad can be seen below!

I went through many Indian cultural and spiritual arts and paintings to design the PCB art and board outline. After a lot of research and leanings, I designed a PCB art using Adobe Illustrator.

Let me explain the process and the experiences I went through to build my own electronic badge.

When I decided to build an electronic badge, I was gone through many ideas. That lead me into confusion regarding which one I need to design, Literally I don't stick with an idea. instead of I am rapidly changing the ideas. So what I did is, I listed out the features that I wanted in the badge that am designing. So here are thecriteria that I listed out in the idea sparking process.

Should be a minimalist design

Should be compact in size

Should have I/O pinouts

Should be battery powered

Should have good LEDs that can be programmable to something useful

Represent a culture or art

After going through the rough list, I started to search which Microcontroller, LEDs that I need to use for the Pixelpad. Finding a good theme for the art is too complicated for me, you know it right?

I don't have that skill!

I decided to use the Atmega32U4 microcontroller for the badge design. It comes with USB support and supports data transfer rates up to 12Mbit/s and 1.5Mbit/s. It can also be used as an HID device. So, I stuck with ATmega32U4 as the MCU. You can definitely check out the datasheet I attached to this project.

I used 12 NeoPixel LEDs because every LEDs can addressable and a single Data pin needed to control the RGB colors. So, I decided to stick with NeoPixels.

I used Autodesk Eagle CAD to design all my PCBs. I started to design the circuit Schematics in Eagle. The main components that i used in the schematics are explained below.

After the schematics designing, I started to design the printed circuit board (PCB). First, I placed all the components in an order that I wanted. Then started to route the air wires manually. I used a minimum trace width of 8mils for the traces. The board design is for a two-layer PCB. the overall dimension is 66 x 66 mm. You can find the design files and Gerber files attached at the end of this project.

Import PCB Art to the Board

I designed the PCB art in Adobe Illustrator. You can use any vector designing software to do this part. You can either used illustrator or stick with an opensource one like the Inkscape. I tried a lot of design and in the end, I made it to the expected design. After designing the art you can save it as an8-bit BMP format.

On the top, you can find ULP icon, by clicking the icon you get the popup window to select the ULP. The search for import-bmp then opens the import-bmp ULP.

Then select the BMP file you needed and the layer you wanted to place and scale measurements etc... and click OK. After that, you need to place the design in the PCB design where you wanted.

I used Autodesk Fusion 360 to view the 3D model of the PCB, I also used Fusion 360 to design the board outline for the dimension layer. You can definitely use the advantage of Fusion 360 and Eagle integration.

Exporting the Gerber File for Manufacturing

Save each layer into a folder and compress the folder into a zip format.

There are a lot of PCB manufacturing services in China for cheap as $5 for 10 PCBs. I personally recommend PCBWAY They deliver good quality PCBs and the customer care support is awesome.

The PCBs take two weeks to arrive according to the delivery method. Meanwhile, I started to collect the required components for the project. I already have some of the components, so I bought the remaining components from different sources. But I have given all the components link to the store.

I also used a PCB cleaning solution to clean the PCB from the excess solder flux.

Programming the Pixelpad Indian Board

Sorry for the croped image

I Soldered all the components on the PCB. To program the board using Arduino IDE first we need to burn an appropriate Atmega32u4 bootloader to the board. I used the Sparkfun pro micro board's bootloader for my board. To Burn the bootloader you needed is ISP programmer or you can use an Arduino board as an ISP programmer. I build a USBTiny ISP programmer myself, visit my USBTinyISP programmer page.

When connecting the Pixelpad Indian, the power LED will light up.

I chose the Sparkfun Pro Micro board from the board manager and select the USBTiny ISP as the programmer from the programmer window. Then click the burn bootloader. It will take a little time to burn. After burning the bootloader, It is ready to program via the micro USB cable.

I made a basic sketch to show an analog clock time using the NeoPixel LEDs and RTC. The red LEDs show the hours and the blue LED shows minutes.

You can download all the files and resources to do this board from the end of this project.

Here is the working video of the above-mentioned sketch.