Hardware-as-Code Part I: An Introduction

Hardware-as-Code Part I: An Introduction 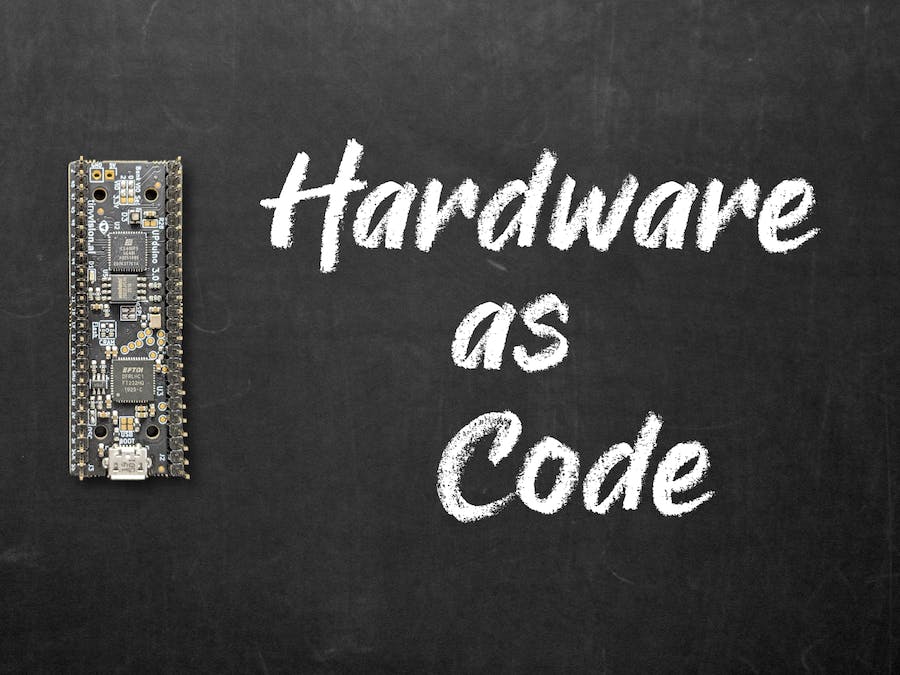 In this multi-part series, we’ll take a look at how you, a software developer, can design custom hardware without learning a new language or deep knowledge of logic design. This is possible through a technology called high-level synthesis (HLS) which can generate hardware logic from algorithms described in C/C++. Not only that, but we can download our custom hardware into programmable logic without physically building anything! In this first installment, we’ll cover some background on what "hardware-as-code" means, how is it different from software, and most importantly answer the question: why would you want to do that? In subsequent parts, we’ll get hands-on and build real custom hardware as we progressively explorer different topics. Some embedded-systems experience (e.g., Arduino) is helpful, but not required; you just need some familiarity with C/C++.

Software is all you need, right?

Clearly, I wouldn’t be writing this if I thought that was the case. The most blaring problem is that software isn’t very useful if you can’t execute it. Okay yeah, you can look at it and admire it, but no one would be writing software if you couldn’t execute it, and for that you need hardware! You say sure, but once we have a compiler and a CPU were good, right? After all, we have Turing completeness and all that. Yes, but …

Turning completeness tells us what we can do, but it does not imply that we can do it practically. In practice, there are many different CPUs out there because many different hardware solutions are required to build practical solutions for different situations. Most often we are trying to balance the tradeoffs between speed, cost and energy usage. In some cases, you simply cannot meet resource constraints with any CPU. For example, the area of tinyML involves using machine learning on resource-constrained devices. That can be very hard to do with a general-purpose CPU.

Most developers don’t realize that CPUs are actually very inefficient. CPUs spend a large amount of time and energy reading instructions from memory, decoding the instruction and scheduling it to execute. An alternative is to build hardware that implements your specific algorithm without instructions, completely eliminating the overhead found in a CPU. Beyond that, custom hardware will typically also leverage parallelism not available with a CPU.

Here are some applications where people often find it useful to build custom hardware rather than use an off-the-shelf CPU+software:

The term hardware is used to mean many different things. In this series, as we explore "hardware-as-code", we mean the type of hardware normally used to implement a CPU. More specifically, synchronous digital logic circuits. Let’s break down what this means. It’s probably pretty obvious, but we are talking electrical circuits here, not mechanical devices. The most familiar term to the software developer is probably digital: manipulating data represented by 0’s and 1’s (i.e., binary).

Another term you should be familiar with is logic. This means calculations are implemented by combining logic operations (and, or, xor, not) which are each easily implemented in a circuit. For example, addition, subtraction and multiplication can all be implemented by combining various logic operations on binary values. For our purposes, we don’t really care how; just like we don’t typically concern ourselves with how a compiler translates our code into instructions.

Finally, you have likely encountered the term synchronous, but probably not with the same meaning as it is used here. In this case, it means that the whole circuit it controlled by a clock. The clock is an electric signal that oscillates between 0 and 1 with a fixed period. Each period is a cycle and values are updated once per cycle. The number of cycles per second is the clock frequency and this is exactly what we are talking about when we talk about processor frequency. You’ll learn more about that in later articles when we discuss performance.

The magic of programmable hardware

This is all great and everything, but are we really going to physically build logic circuits? Well, although it is possible to follow a similar flow to fabricate an actual chip, we won't do that here. As I said in the introduction, we can build hardware in programmable logic, a sort of virtual hardware. Some very clever people figured out a way to build digital circuits that could be programmed to do different logic operations after the circuit was fabricated. You can download any logic design onto these chips from your computer in the same way you can program an Arduino. It’s truly amazing technology.

In this series, we will be using Field Programmable Gate Arrays (FPGAs). These programmable logic chips consist of an array of blocks that can be programmed in the field to perform the various logic operations we discussed in the last section. FPGAs also include a few other important elements beyond the basic logic blocks, but we’ll discover those as we go.

At this point, you should have some idea of what I mean by "hardware-as-code", why you might want to do such a thing, and hopefully, at least a little excitement about learning more? For our next installment, we go hands-on with some hardware-as-code development tools.

The tools specifically target an inexpensive FPGA board from our hardware partner tinyvision.ai. You won’t need the board to use the tools, but I’d encourage you to pick one up so you can actually run your projects on the board, which is very rewarding. Use the following link to make sure you get the correct board: https://tinyvision.ai/products/upduino-v3-0?variant=39608867618919. This one has a pre-soldered PMOD connector which we will use to connect sensors later in the series. Supplies may be limited due to the silicon shortage and you'll want to have it when "Hardware-as-Code Part II: Hello FPGA" drops, so it's a good idea to order now.

The tools do require Windows, so you will need access to a Windows machine.

Please follow me to stay up-to-date as I release new installments. There is also a Discord server (public chat platform) for any comments, questions, or discussion you might have at https://discord.gg/3sA7FHayGH