Make your own minimalist and modern photo frame with a tri-color ePaper Display, Raspberry Pi, ProtoStax Enclosure and Python

Make your own minimalist and modern photo frame with a tri-color ePaper Display, Raspberry Pi, ProtoStax Enclosure and Python 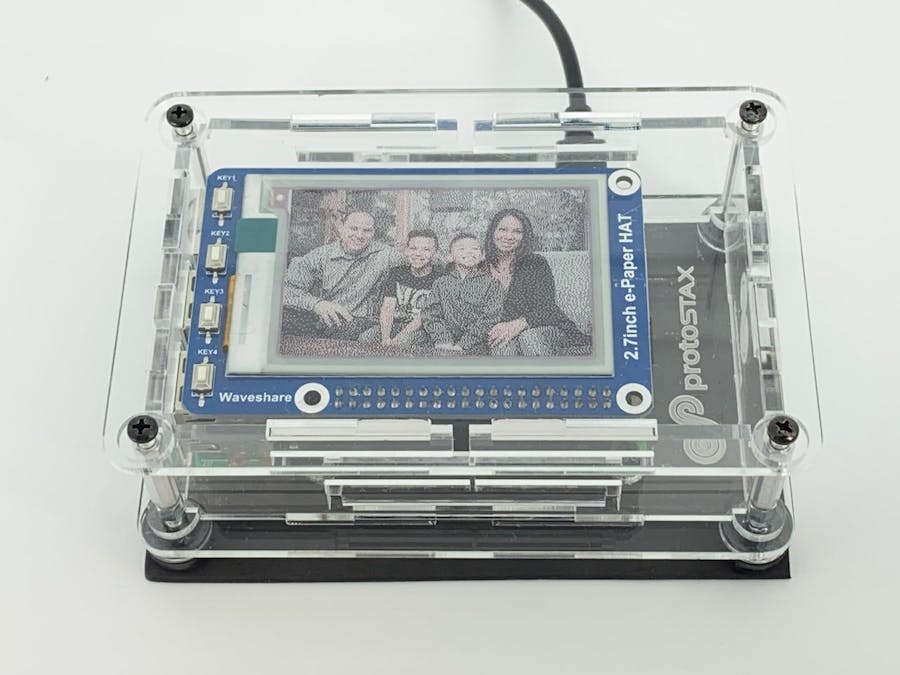 In this project, I show you how to make a minimalist and modern digital photo frame, using a Raspberry Pi, ePaper Display, ProtoStax Enclosure and some Python.

The ePaper display continues to display any rendered image even when turned off and doesn't need any power to maintain the image. Even with a tri-color ePaper Display, you can still get pretty good image quality and color variation by using a method called Floyd-Steinberg dithering.

I automated the whole process so that you can simply place regular image files in a folder – the program automatically picks the next image to display and performs the necessary image processing required (on the fly) to render it on the ePaper Display. Here are some results! As you can see, the image quality is pretty impressive given that the display only has 3 colors (red, black and white)!

Here's a short video on it:

Read on to get more details!

A little background on ePaper Displays

I love the ePaper Display for its austere simplicity and elegance. The display persists even after the power is shutdown. The ePaper display can create highly detailed images with the contrast ratio and readability of printed material. The mechanics of the ePaper display are also quite fascinating in how the colors of the various pixels are manipulated to display the final image.

The ePaper Display I use is a tricolor one from Waveshare that can display white, black and red. I find the little pop of red quite useful in highlighting and providing some visual contrast and relief, as I have done in my International Space Station Tracker, Word Clock, and Weather Station projects. The tricolor display does not support partial updates, and as a result takes about 16 seconds for screen refresh - it is therefore suitable for projects where the display does not change that often. I find these challenges quite refreshing to overcome and am always thinking of new ways to harness the display.

The Waveshare ePaper library Display method takes in two Python PIL images as arguments - one to render the black pixels (all non-white pixels are rendered as black), and the other image to figure out which pixels are red (all non-white pixels in this second image are then rendered as red). It starts by flipping all the pixels to the "white" position, and then starts to flip all the black pixels to the "black" position from the first image. It then proceeds to process the second image, and flip all the non-white pixels there to the "red" position on the physical display to get the final image.

The Floyd–Steinberg Dithering algorithm was first published in 1976 by Robert W. Floyd and Louis Steinberg. It is commonly used by image manipulation software, for example when an image is converted into GIF format that is restricted to a maximum of 256 colors. Of course, our ePaper display is far more restricted than that! 😊

Here is more information on Wikipedia on the algorithm and how it works.

The Waveshare Wiki talks about the Floyd-Steinberg algorithm and how it can be used to create a tricolor image for the ePaper display using Adobe Photoshop, a photoshop color table that they provide, as well as instructions. (See https://www.waveshare.com/wiki/E-Paper_Floyd-Steinberg)

In their example, they use a simple illustrated image.

The results were not bad!! However, there are a lot of steps just to get one image to display on the ePaper, and you also need access to software like Adobe Photoshop.

I wondered how the results would look with a photograph that has a lot more detail and colors. Additionally I also wanted to see if I could use some open source tools, preferably command-line vs. using Adobe Photoshop, and something that was available for the Raspberry Pi.

Using a tool with command line options, at the very least I could execute a Bash script from Python to do the needful conversion and then continue -- If I could find a Python library to do the same, even better!

ImageMagick is free software for digital image manipulation, available both as precompiled binaries as well as full source code, that can run on Linux, Mac OS X, Windows and iOS platforms.

It has a TON of options and capabilities. There is a bit of a learning curve here, for sure but there is a lot of online help available from an active community. In fact, I got some hints and help in my capricious quest here on this Stack Overflow question "Convert full color image to three color image for e-ink display."

Beyond the question asked by the original poster (about converting full color images to three color images for e-ink display), I also wanted to figure out how to split the converted image into white-and-black and white-and-red components, and got into a chat with one of the users, Fred Weinhaus (whom I've attributed below along with Mark Setchell). (See the comment thread here).

I ran into some problems initially, and it turned out that my problems arose from working with JPG format and converting the result to JPG as well - this is a lossy format and it ended up with unexpected results, losing the color palette and going back to RGB -- something to bear in mind if you choose to work with the JPG format. After I opted to convert the result to BMP and continued working with that format, everything else worked very nicely!

I was able to take a portrait JPG image, and with that, generate scaled-down (to 264x176 pixels suitable for the ePaper Display) Floyd-Steinberg dithered tri-color image that looked really good!! I was blown away! I later also figured out how to split the image into its component white-and-black and white-and-red portions to display on the ePaper Display as I had mentioned above.

Here is a basic overview of the process:

2) Create a color palette with red, white and black (this is the color table to be used for the remapping)

4) Clone the image, converting all red pixels to white - this results in a black-and-white image with only the black portion of the non-white pixels showing

5) Clone the dithered image again, this time converting all black pixels to white - this results in a red-and-white image with only the red portion of non-white pixels showing

I took the bottom two images as input to my ePaper Display, using the EPD library. The final rendering was quite satisfactory - ok, it actually blew my mind that a 3-color palette could still show so much detail on a small 264x176 screen!

The next thing I wanted to do was automate the entire process. I could run the ImageMagick commands in a Bash script, execute the Bash script from within Python to generate the final white-and-black and white-and-red images, and then use those images within Python to use in the call to the EPD display() method.

However, a Python wrapper over ImageMagick would be more versatile. There are a few options available, and I settled on one called Python Wand.

There is a bit of a learning curve here as well, especially in trying to figure out how to map the command line options of the ImageMagick "convert" utility to the API calls of Python Wand.

I created a function called getImagesToDisplay():

For the given filename, it reads the image data in as a WandImage object. It then

The main() method obtains the list of files in the pic/ folder and then cycles through these files to display on the ePaper Display, sleeping for a configured amount of time in between.

From Prototype to Product

I used a ProtoStax Enclosure for Raspberry Pi B+/4B to house the Raspberry Pi and ePaper Display. It is a clear acrylic case and allows the ePaper Display to be seen well while protecting it from grubby fingers. The end product can be used by your nightstand or coffee table to display your favorite photos.

You can get the code from the link provided to the GitHub repository under the Code section below, and follow the instruction on the README there.

It also provides an option to run the program as a service, so it will run automatically when the Raspberry Pi is booted up, and also shutdown and cleanup when the Pi is shutdown.

As always, I like to end by talking about how you can take this project forward with your own additions! Once you get comfortable playing around with the code sample and understanding the code, it is always nice to try to extend your learning by doing more.

Can you think of other ways to extend this project? Share it with us below! 😊