In this project, I show you how to track and display the current location of the International Space Station (ISS) and its trajectory over time, using a Raspberry Pi, ePaper Display, ProtoStax Enclosure and some Python.

The Waveshare ePaper Display uses SPI for communications. We therefore need to enable SPI on the Raspberry Pi, if you haven't already done so.

Launch raspi-config. Go to "Interfacing Options". Navigate to SPI and press enter. Say yes when asked if you would like the SPI interface to be enabled. See steps below in the slideshow - the caption for each image is numbered and gives additional explanation for each step.

1 / 4 • Navigate to "Interfacing Options" in raspi-config

This installs the demo code as well as the requisite Waveshare ePaper library.

Step 2 - Double-check that the SPI interface is working

Some people have encountered issues where the SPI interface doesn't get enabled properly.

Double check that SPI is actually "on" in your /boot/config.txt. Search for an entry like the following:

And check that you can see the SPI device connected:

should show something! (like /dev/spidev0.0 /dev/spidev0.1 above) If it doesn’t, try sudo rpi-update and reboot.

If SPI has been properly enabled, the /boot/config.txt entry should show up as above AND you should also see the device connected when you list the SPI devices.

The code expects Python 3+ - if you are using an older version of python, you will need to install python3

The code also depends on other libraries. Install spidev, RPi.gpio, Pillow and requests dependencies as follows:

cd to the directory that was created with you cloned the git repository above.

If all the steps above have been done correctly you should see the World Map with the current location of the International Space Station on your ePaper Display! Every 30 seconds, the current location gets updated (which the previous locations are plotted as the trajectory). 15 minute markers (red rectangles) are also added, to get a sense of how fast the ISS is traveling!

Here is the ISS Tracker in action (speeded up a bit):

The code has a couple of nuances to bear in mind. The location of the ISS is in latitude and longitude coordinates. These range from -180 to 180 (longitude) and 90 to -90 (latitude). These need to get mapped to the XY coordinates of our ePaper Display. The 2.7 inch display from Waveshare has a screen resolution of 264 x 176. That is an aspect ratio of 3:2

After a bit of search, I found a world map with latitude and longitude lines, which I was able to shrink to a size of 264 x 181. Since the ISS does not fly over the poles, I can rest assured that the latitude/longitude mapped onto this coordinate system will not spill outside of our 264x176 display.

The position of the ISS gets updated every 30 seconds, and gets appended to a list. We transform the latitude, longitude data of each position to our XY Coordinate system.

We plot the World Map in black. We then plot the positions in the list in red - the last position in the list is the current location, and so we show that using an ISS icon. The other positions get plotted as little circles (just plotting a point is too small for us to see), and every 15 minutes, the position gets plotted as small rectangle. These 15 minute markers help us to see how fast the ISS is actually moving! It completes a full orbit in about 90 minutes, and a little less than 16 orbits a day. Vrooom vroooom! 🏎🏎

Once you get comfortable playing around with the code sample and understanding the code, it is always nice to try to extend your learning with doing more.

Can you think of other ways to extend this project? Share it with us below! 😊 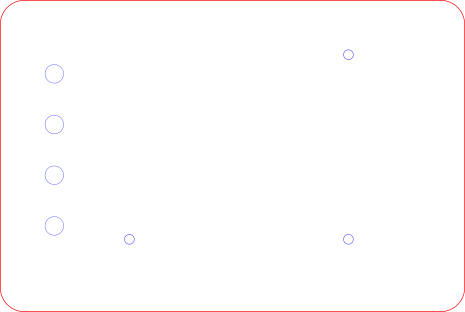