ESP8266 Sensor Board powered by a Battery, monitoring Soil Humidity and Temperature. Data are been published at Cayenne MQTT server.

ESP8266 Sensor Board powered by a Battery, monitoring Soil Humidity and Temperature. Data are been published at Cayenne MQTT server. 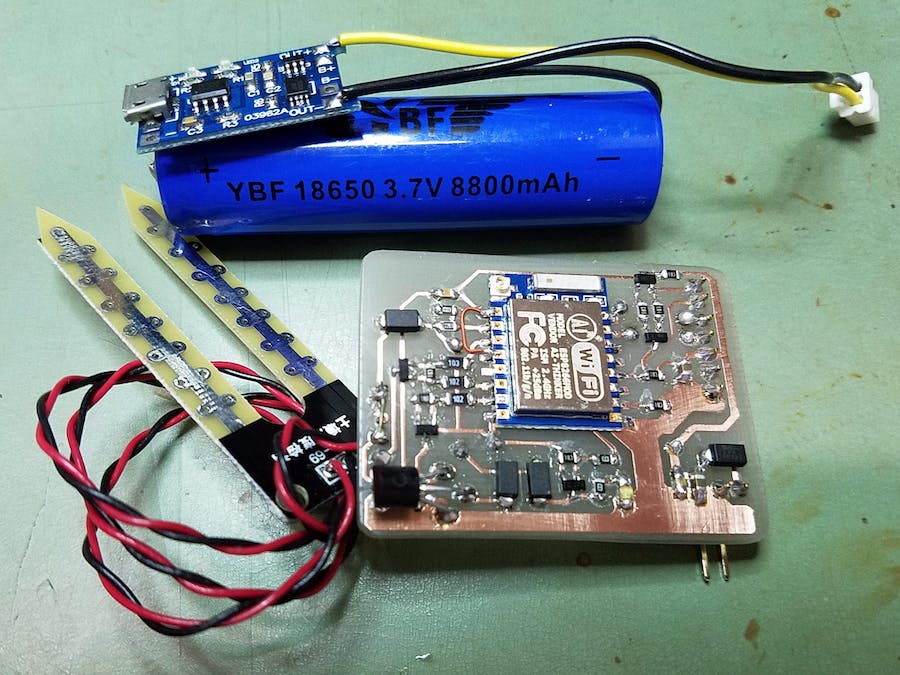 Due to busy life and lot of things to be done, the gardens become forgotten or in 2nd plane in the "To Do List".

So I have decided to built the irrigation system on my garden and adding a AC Valve (same used on the washing Machines) to control the water which is turned ON/Off by a Analog timer.

The solution is working pretty well, but it is not optimized, and throw away a lot of water. So, it is time to automated the irrigation system, and there is nothing better than ESP to perform this automation!

The idea is to have an humidity sensor on the earth, measuring the amount of water on the soil to give the measurements for the ESP take the decision to open or not the water, and for how long.

In order to make the control, it is necessary to monitor the variable, in this case, humidity. So the first step was to prepare a prototype with SparkFun Thing Dev Board, and check if the idea works.

Since there is no power source on my garden, I decided to add a Lithium Battery to power up the Board and put all inside a plastic bag to protect from water.

"IP67"Housing to install Sensor on Garden

With the prototype ready, it was installed to collect preliminary data:

As the circuitry was now powered up by battery, it become necessary to monitor the battery voltage level, as well as Humidity.

Prototype answered pretty well, but due to the garden`s length, more sensors will be necessary, so I have decided to design a specific board for this application, Sensor Board, designed and made by me at home.

Raw Sensor Board - Home Made

Sensor Board has 3 Analog Readings, Umidity, Battery Voltage and Temperature, all of them multiplexed by Transistors at the same AD Converter of ESP8266.

Sensor Board assembled with electronic components

With the Sensor board assembled, a plastic bag was added on it again and put it to run on the garden.

"IP67" Housing for Sensor Board goes to garden

Sensor Board has demonstrated a good performance on the field, except by the power consumption, which is not so small due to the Red LED on ESP module which is always on.

Assembling more Sensor Boards and distributting them over the garden, more accurated will be the data and the decision of Master to turn on or off the water to irrigate the garden. Master is on the "oven", some more days will be ready to be installed and process the data from Sensors Boards.