DES01: the better for wear

DES01: the better for wear 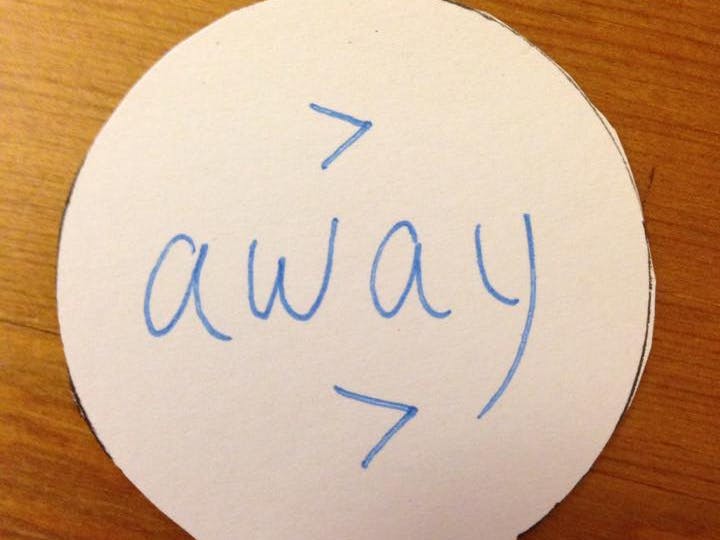 "Around ten years ago, most computer­-based tasks were performed on desktop or laptop computers in stationary situations. As mobile computing (at the moment, mainly smartphones) has become more and more ubiquitous, many of these tasks have found new life as apps. In addition, the mobile form factor allows for many brand new tasks that simply could not have been performed before: for example, check­-in based applications like FourSquare would have been impractical at best if available only on larger computing devices.

Your goal is to discover what sorts of applications can be re­imagined or created in the next radical form factor shift. This semester we’ll be working with smart watches, which provide, among other things, an instantly ­available input output surface, data streams from a small set of sensors, and a need for more minimalist and fashion­-conscious design."

The two non-college users who I interviewed for this assignment were both women who had graduated college for a few years; one is currently a masters student and the second (who did not reveal her age) is happily married and working.

Some quick notes from both interviews...

Interview #1: 25-year-old IT intern from India; loves dancing & traveling; currently one of my subletters

Where is it kept usually?

Pros and Cons of Smartwatch:

Where is it kept usually?

Pros and Cons of Smartwatch:

After the interviews, I was mainly surprised by how differently these two women used their smartphones in comparison to myself. While I used my phone for everything (this would include looking up information, navigation, texting, Snapchat, photography, games, reading, and music), both of them seemed to use their phones exclusively for messaging others, whether through text or call.

Both also shared a similar need to travel a lot. The first interviewee daily commutes to her work and also travels between her home country and the U.S., and has been inconvenienced when she did not have her phone on hand. Meanwhile, the second interviewee expressed how when she drives, she is unable to access her phone.

The need to text and call, as well as the fact that both women work and travel from location to location frequently were elements I kept in mind as I began thinking of ideas for possible smartwatch apps.

I spent time brainstorming 12 different applications that could be well-suited to the smartwatch form factor, yet meet the needs of these two women. I focused on simplicity and efficiency for these apps, instead of creative interaction. Many apps I thought of served the same main function, but used different methods to accomplish their goal.

The idea i eventually chose was #10, the navigation app that had a user-programmed traveling mode because the app is both practical and efficient for those who are constantly traveling, but cannot call (or even text) at that precise moment, which are problems that both the interviewees have had.

Purpose: For users traveling from place to place, and who are unable to immediately respond to a text or phone call, the "Away" sends automated messages preset by the user to any callers or texters that contact the user while he / she is traveling.

I took time to prototype my idea by cutting out circles from index cards and using a discarded scrap of cardboard to function as a crude frame for the watch.

The following was the final result:

The purpose of the app was to allow users to be able to pre-program messages or other information to send to specific contacts, calling contacts, or all contacts when said user is traveling. These pre-programmed settings can also be saved under various names to be accessed quickly later in similar situations.

The app has a welcome screen for newer users, and takes the user immediately to a page where the user can either select an existing mode or create a new one.

The user then has a variety of options to select. Most navigation can be done simply by tapping once on the desired option. For screens where the user can provide multiple inputs (e.g., selecting specific contacts), the user proceeds by pressing the blue arrow.

The keyboard option is selected either "other" on the "method of travel" button is pressed, the user is sending a custom message, or the user names the setting they have successfully programmed into the system. The alphabetical keyboard is not my own creation; I modeled it after a pre-existing design I found on Google Images:

And there you have it!

I asked my first interviewee's colleague and friend to try out my design. He has a very similar background to her, and is in the Bay Area for similar reasons as well.

I gave some basic information on the purpose of the app. From there, I let him use the app by himself and observed.

The welcome screen proved to be helpful. The first screen, however, was not immediately obvious what to do. He randomly tapped on the one option ("NEW") that was presented, so I guess the size of the option was helpful.

Because I had no idea to show when something was selected (or in some cases turned on), at times he was unsure how to proceed; he also did not know you could select multiple contacts. The button logic (to proceed) on the "contacts" page was also inconsistent with the single tap (to proceed) on the previous screen for selecting a method of travel, so he randomly tapped to figure out what to do next.

The yes-or-no questions were straightforward, and he did not have a hard time understanding or navigating the questions.

The major problem was when after he sent the custom message, he encountered the "saving settings" screen, which directed him to a keyboard. When he pressed back, he once again encountered the "saving settings" screen, and then was redirected to the keyboard. My intention at this point was for him to save his settings under a name (e.g., "when driving") to access later, but I had left out any indication of this on any of the screens, so he thought he had stumbled upon some infinite loop. The name "saving settings" seemed to be incredibly misleading as well. At this point I had to broach him to simply enter something random and see what happened, which he did.

I manually wrote down what he had typed onto the following screens, displaying the newly saved setting. When he tapped it experimentally, he could turn the setting on. The fault on my part was not giving an indication when it was turned on or off.

In general as well, swipe logic was not immediately obvious, simply because most of the selection methods were taps.

Feedback and Ways to Improve

After the testing, the user gave me his general understanding of the app. He understood that he could select contacts and send custom messages when he as on the go. However, he got a little confused about what "NEW" referred to -- was it a new custom message that was automatically saved? I had intended the "NEW" for a whole other setting, but I thought it was a good idea if there was a way to save previous custom messages for later. As for his confusion, I could change the label name to "NEW SETTING" to make the selection's purpose more clear.

He mentioned again that he was unclear when to use the blue arrow button to proceed, but he attributed the reason to the fact that there was no indication that multiple contacts could be selected. He suggested having checkboxes next to names next time.

Some other points of confusion included the lack of indicators, which made it unclear that the user could select multiple contacts. He also wasn't sure what would happen if he tapped his newly made setting again after he had turned it on. My implementation required that after creation of the setting, a single tap after returning to the home screen would turn the feature on, but in the future, I could simply have a newly created setting turned on right after it is initialized.

The looping problem -- where it was unclear that he was supposed to name his setting -- proved to be the most annoying problem for him.

One interesting suggestion he made was for the app to have voice support, so if he was mid-travel (e.g., already driving or biking), he could turn on / off a pre-existing option by speaking to the watch, instead of frantically tapping -- which would defeat the purpose anyway. Also instead, of using the keyboard to type a custom message while on-the-go, he could voice-dictate or record a message or answers to questions, and save them into a settings without having to tap the smartwatch.

In addition to his suggestions, I wanted a way to edit pre-programmed settings after initial creation, to perhaps release in a future model.

Overall, he commented that he would definitely use the app, since he found it very useful.

He liked the keyboard design (not of my own creation!), and he thought the options provided extremely thorough (e.g., destination, custom message, etc.). He did nitpick a little over the list of "method of travel" options, saying that he found the app helpful only if he was biking or driving, but saw little use for it on public transit, when he would have his phone. Similarly, he noted that if he had his phone on the plane and he had WiFi connection, his phone could perform a similar feature to the smartwatch and/or he could text his contacts easily, so he saw no advantage in the smartwatch app there.

Obviously, there are still many features and details to add, as well as little things to improve. I learned that even the tiniest details (like the pattern of responses whether taps or swipes, the ordering of questions, the inclusion of transition screens) can make a user's experience of an app significantly better or worse. Taking all his suggestions and comments, as well as my own observations to mind, I can finetune app in the future, so that it is more easily understandable.