This guide will walk you through creating a USB microphone on the Raspberry Pi Pico using the RP2040's PIO, DMA, and USB capabilities.

Create a USB Microphone with the Raspberry Pi Pico 🎤

Create a USB Microphone with the Raspberry Pi Pico 🎤

This guide will walk you through creating a USB microphone on the Raspberry Pi Pico using the RP2040's PIO, DMA, and USB capabilities. 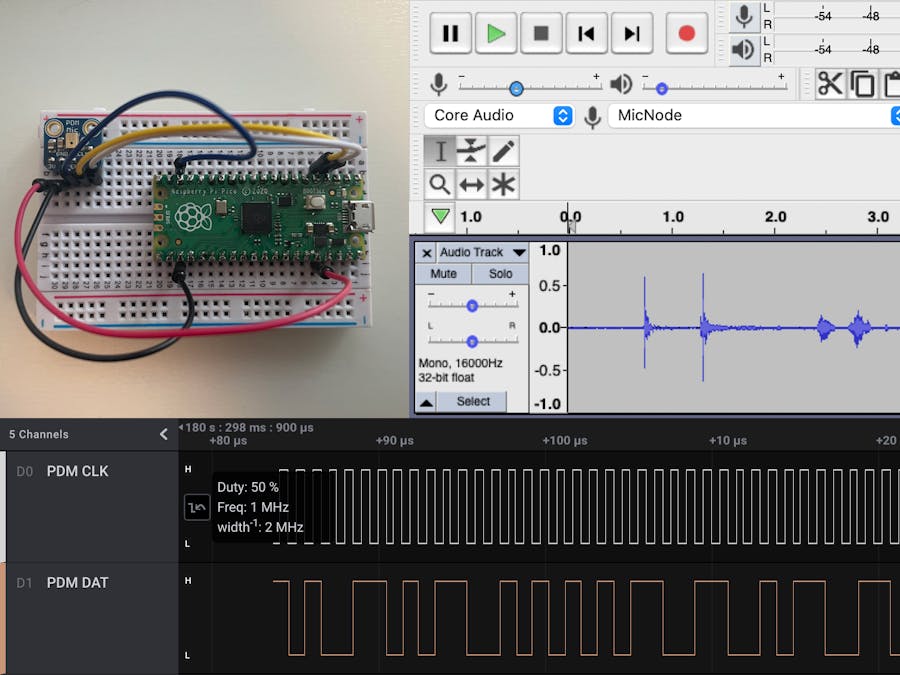 This guide will walk through how to create your own USB microphone device using a Raspberry Pi Pico board and an external digital microphone. This project will leverage the Programming I/O (PIO), Direct Memory Access (DMA), and Universal Serial Bus (USB) capabilities of the boards RP2040 microcontroller (MCU).

USB is an extremely popular standard, released in 1996, for wired computer peripherals, such as keyboards, mice, printers, scanners, and microphones.

The Tiny USB library is "An open source cross-platform USB stack for embedded system" that supports several types of MCU's including the Raspberry Pi RP2040. and has support for both device and host mode. We can use it's built in USB Audio Class support to transform our Pico into a USB microphone device.

The RP2040 MCU has a built-in 4 channel Analog-to-digital converter (ADC) feature with 12-bit precision, this could be used to collect audio from an external analog microphone, however we found the audio quality from the analog microphone to contain a lot of noise, so will be using a digital microphone instead.

There are two common interfaces for digital microphones:

While the RP2040 does not have built-in support for both of these interface types, the super flexible Programmable I/O (PIO) feature can be used to create our own PDM or I2S peripheral interface in software. I will generate an output clock signal to the microphone on one pin and use another pin to receive data from the microphone. For this guide we'll be using the Adafruit PDM MEMS Microphone Breakout board.

How does PDM work?

When the PDM microphone receives the clock signal, it outputs a 0 or 1 signal based on the analog audio value it captures from the microphone. To capture audio at 16, 000 samples per second (16 kHz), the PDM microphone's clock input must be driven at 1.024 MHz = 64 x 16kHz and then the PDM's microphone data single can be filtered and downsampled. For each sample, the 0 or 1 output for 64 values are averaged to create a single 16-bit value between -32678 and 32767 for the sample.

You can use a logic analyzer, such as Saleae to view the PDM CLK and DAT signals.

The system will do the following:

1. Use the PIO to generate a 1.024 MHz clock signal into the PDM Microphone.

2. Capture a digital value from the PDM Microphone once per clock period using PIO.

4. Once the raw PDM data for 16 samples is received, it will use the OpenPDM2PCM library to filter and downsample the 1024 bit raw PDM data into 16 Pulse-code modulation (PCM) 16-bit audio samples.

Once both items are soldered, place them on a breadboard and setup the wiring as follows:

Note: Connecting PDM Mic. SEL to GND will result it clock out new data after the clock signal falls (goes from logic level 1 to 0).

See the "Getting started with Raspberry Pi Pico" for more information.

Section 2.1 of the guide can be used for all Operating Systems, followed by the operating specific section:

Getting and compiling the pico-microphone library and examples

Make sure the PICO_SDK environment variable is set.

In a terminal window, clone the git repository and change directories:

Create a build directory and change directories to it:

Run cmake and make to compile:

Hold down the BOOTSEL button on the board, while plugging the board into your computer with a USB cable.

You should see a new microphone device named "MicNode" attached to your system:

Now that we have the Raspberry Pi Pico board configured as a USB microphone, any desktop recording application, such as Audacity can be used to capture capture from the device over USB.

Once it is installed open the application, and select the "MicNode" device as the input.

We created our own USB microphone using a Raspberry Pi Pico board and external PDM microphone. The Raspberry Pi RP2040's PIO, DMA and USB hardware features were all used in this project along with the OpenPDM2PCM and TinyUSB software libraries on one of the RP2040's Arm Cortex-M0+ processors.

Our USB microphone captures PDM audio data from the PDM microphone, converts the PDM data to PCM format, and then sends the PCM data to the PC over USB all in real-time! Since the USB Audio standard is used for communications between the Raspberry Pi Pico board and the PC no custom software is needed on the PC side.

While this guide transfers the audio data from the Raspberry Pi Pico to the PC over USB, you can also use the pico-microphone library with an analog or PDM microphone, and perform on device Digital Signal Processing (DSP) to react to the board's audio environment without a PC.

For more tutorials using the Raspberry Pi RP2040, check out these projects below: 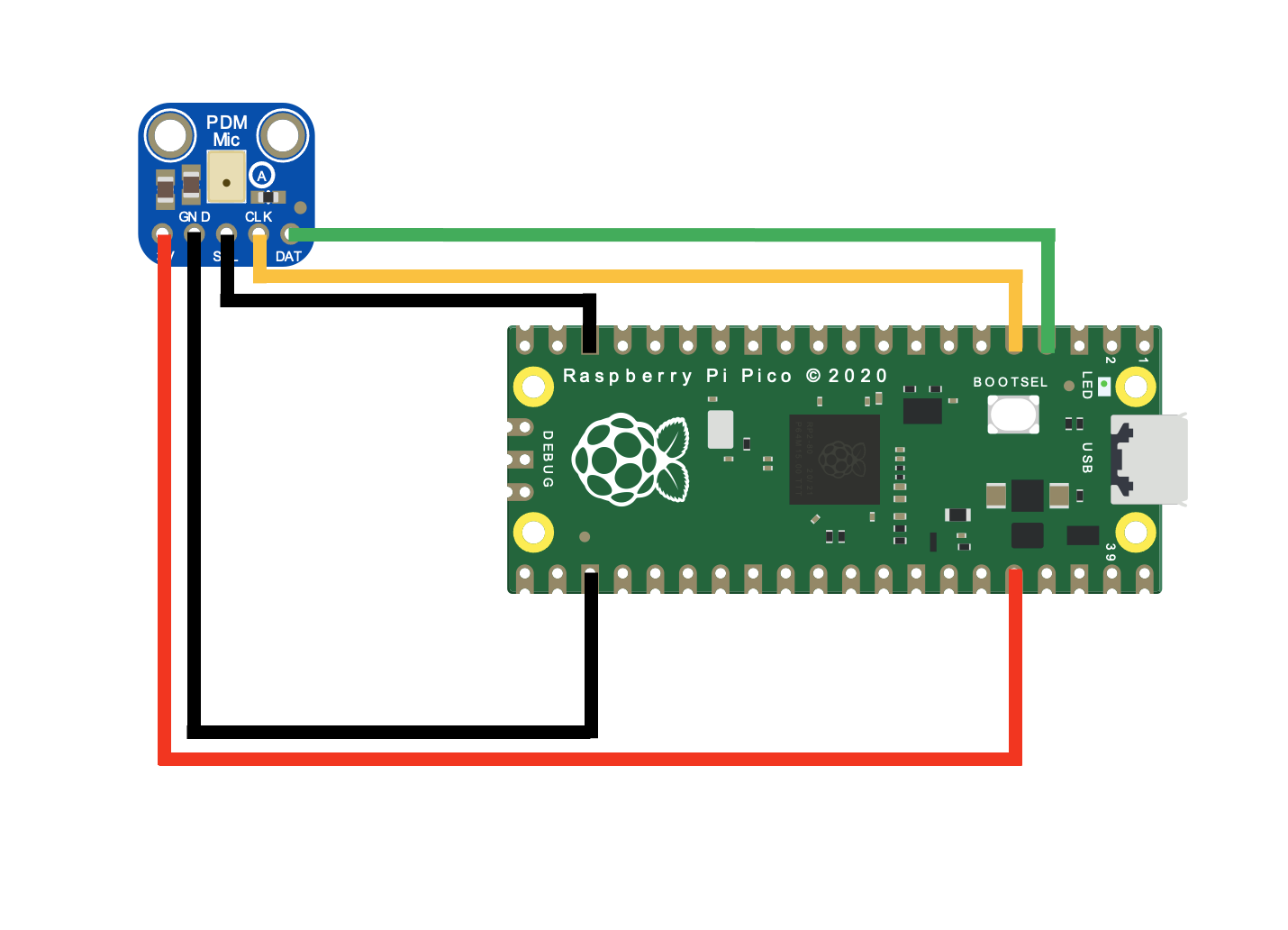