A portable patient monitor which monitors your health is introduced with the combination of Raspberry Pi and ProtoCentral's Healthy PI Hat.

Build Your Own Patient Monitor With A Raspberry Pi

Build Your Own Patient Monitor With A Raspberry Pi

A portable patient monitor which monitors your health is introduced with the combination of Raspberry Pi and ProtoCentral's Healthy PI Hat. 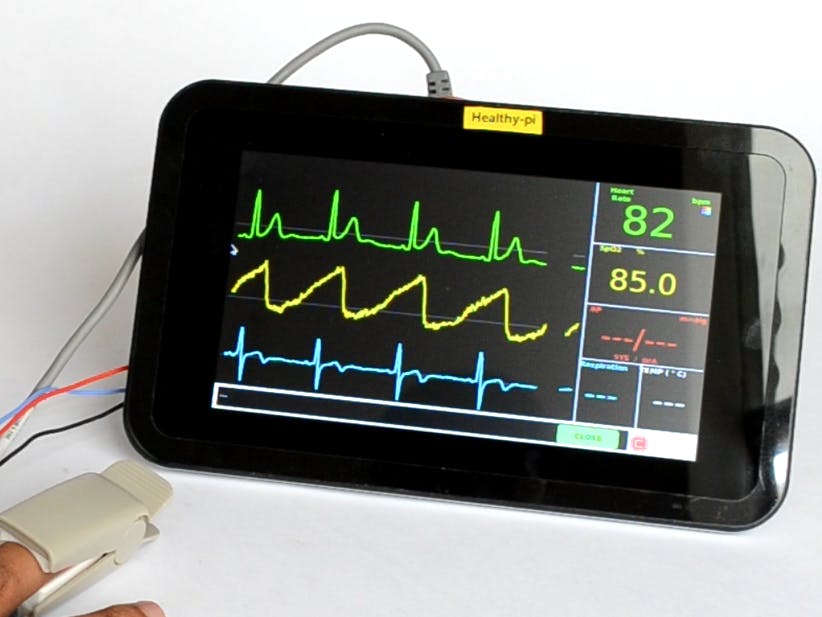 Raspberry Pi boards are used in many applications like media streamer, Arcade machine, tablet computer, home automation, many more. And now Raspberry Pi can be used as patient monitor with the help of ProtoCentral's Healthy Pi Hat. This patient monitor is portable and efficient in monitoring ECG, Heart Rate, SPO2, Respiration, Temperature and Blood Pressure of a patient. This project shows how to use Raspberry Pi Board along with the ProtoCentral's Healthy PI Hat to change into Patient Monitor.

The HAT uses the Atmel’s SAMD21 processor which collects the ECG and SPO2 data from ADS1292R and AFE4490 respectively and update the data to Raspberry Pi via UART interface. The SAMD21G18A is a 32-bit ARM cortex-M0+ microcontroller with max CPU speed of 48Mhz. It got a SRAM 0f 32KB and Flash 256KB. It runs with a 1.6-3.6V supply.

How To Get Started:

The board is pre-loaded with the firmware which works stand alone with the Rpi with fewer setup. However you will need some software. Here's what we're using:

Please note that Atmel Studio 7 does not support Mac and Linux . This is the IDE software that can do step & memory debugging and its only for Windows. Also you have to make an account on Atmel's site. The IDE can be downloaded from Atmel Studio's Official Website.

Step 2 : Open the Project [navigate the path where the project is saved].

Step 3 : You'll see the following, where the sketch is in a window, you can edit the code here if you like.

You need a debugger to load the code into the SAMD21G18A. Atmel-ICE will help get from here http://www.atmel.com/tools/atatmel-ice.aspx

Step 1: Set Up and Check Interface

Ok close out the modal programming window and build the program. If there are no error, then your build will be successful.

Debug Menu
Setting the interface for debugger
Run the Program

Our ProtoCentral's Helathy Pi Hat is ready and now we need to setup our other important device "The Raspberry Pi". The following are the steps involved to get Raspberry Pi ready for a patient monitor.

Step 1 : Install and Update the OS

As the ProtoCentral's Healthy Pi Hat communicates with the Raspberry Pi board via GPIO 14/15 which on the Model B, B+ and Pi2 is mapped to UART0. However on the Pi3 these pins are mapped to UART1 since UART0 is now used for the bluetooth module. As UART1 is not stable because it is dependent to clock speed which can change with the CPU load, we have to disable the Bluetooth module and map UART1 back to UART0 (tty/AMA0).

The two important devices [Raspberry Pi Board and Healthy Pi Hat] are ready to communicate with each other. Now we need to setup the software to achieve the end result. We use " Processing IDE " to interact with the user. Processing IDE is used as visualization software for the patient monitor and it is an open source framework based on Java. The following are the steps to get the visualization software ready for patient monitor:

Latest Version of the Processing IDE can be downloaded from the following links:

Unzip the file once downloaded.

1. Download the necessary files & directories or clone to your desktop from GitHub.

2. Unzipping the archive should make a folder by name HealthyPi that contains the visualization code.

3. Locate the Processing sketchbook directory on your computer. This should have been created automatically when you installed processing. Depending on your operating system, the path will be as follows:

Note: This directory appears as "Processing" on Windows/Mac, and goes by the name "Sketchbook" on Linux.

5. Download the necessary library files from the processing IDE by following the steps one by one.

Now you have your own patient monitor with the help of Raspberry PI and ProtoCentral's Helathy PI Hat.

2 projects • 19 followers
ContactContact
Thanks to ProtoCentral.