Use professional software to play fresh news, videos, or any other digital content on giant home-made and remote video LED displays.

Use professional software to play fresh news, videos, or any other digital content on giant home-made and remote video LED displays. 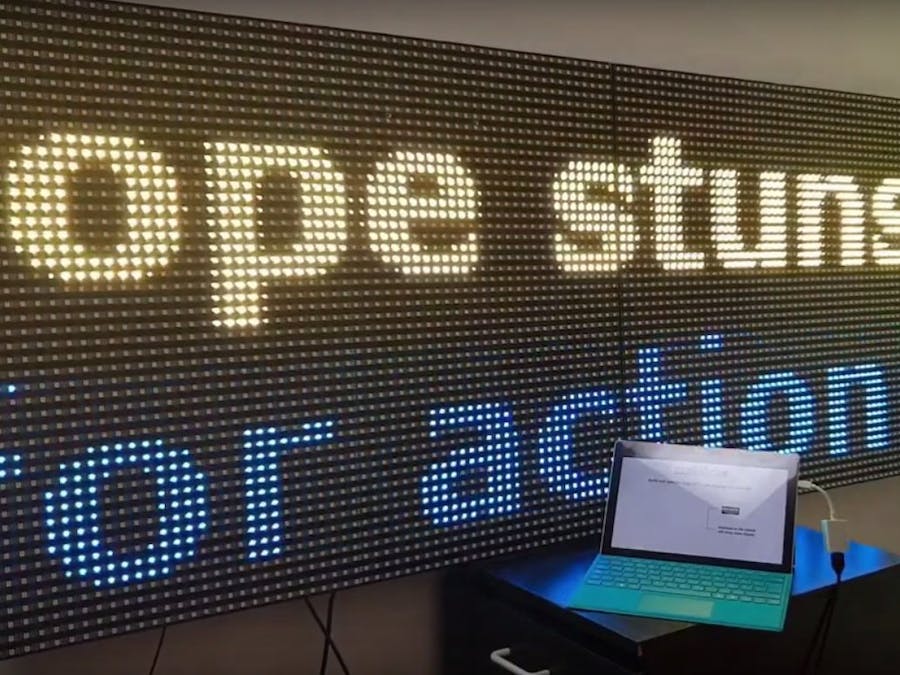 Our earlier project Convert a Bunch of LED Strips into a Big Video Display explains how to build big and affordable hand-made video LED displays that connect to the Raspberry Pi, or any other computer with the standard video output, as an ordinary monitor and with absolutely no programming required to display any video content. The key component in that project is the open-source Pixblasters-Light FPGA based LED controller.

The remote displays are controlled through the Internet and can be physically placed on the other side of the globe.

Much more bigger, attractive and responsive DIY video LED displays can be built by the Pixblasters MS1 Video LED Controller that runs the full Pixblasters FPGA controller code, includes on-board microcontroller for house-keeping functions and necessary LED driving electronics. With this LED controller is possible to drive LED displays built of hundreds of thousands of LEDs.

The Master Pixblasters controller (2) controls Slave controllers (4) through the video link and each slave controller displays the exact portion of the video image on the attached LED panels (3) built of up to 16, 384 RGB LEDs. Each controller (2, 4) is configured for Master/Slave mode by on-board DIP switches. Other configuration parameters are setup only once for each board through a simple configuration menu on the PC (5) connected with the USB cable.

Display’s configuration parameters, such as LED timing parameters and the video input image part for display on the attached LEDs, are permanently stored in the on-board microcontroller that also controls the LED system’s boot-up.

How to Define the Digital Signage Campaign

The Pixblasters controller makes the LED arrangement totally transparent to video content management software. Instead of browsing the Internet in search of code snippets for specific LED patterns or odd software libraries that require guru-level software skills to format into an LED display image,

Pixblasters users just need to plug in the monitor cable to display any graphics and video with no limitations.

Stills and animations, AVI, FLV, WMV, MP4, etc. - what you see on the computer monitor connected to the selected computer is what you get on the Pixblasters MS1 controller-driven LED display with absolutely no coding required!

This enables the Pixblasters MS1 controller to work with virtually any digital signage software, which allows users to operate and manage display content on the same level as high-end professional LED displays. This makes the generation of display content very easy.

The above video clip shows a real-time setup of the signage campaign that broadcasts sport news to remote Pixblasters controlled info kiosks. The campaign is realized by free-to-use software from MediaSignage Inc. (https://www.digitalsignage.com/) and on Microsoft Windows OS based PC machines. All required software can be downloaded from that website.

In the demo, the system administrator runs the SignageStudio Pro program to define the small info campaign and broadcast news and other multimedia content to remote info displays. The remote displays must run the SignagePlayer program to play the defined multimedia content, which includes the MP4 sport video clip and two RSS news feeds broadcasted by CNN.

The demo shows how the administrator can define scheduled playlists, combine video and graphics, incorporate news feeds and social networking posts, etc. Additionally, she can define the operating hours of a remote display, check what is currently playing, change the stored signage campaign on a single remote displays, or update multiple connected displays. All machines are interconnected through the Internet and the remote info displays always play the latest news. In case of the limited Internet connectivity, the players run previously stored contents.

For more information about the Pixblasters project, visit Crowd Supply or our website www.pixblasters.com.