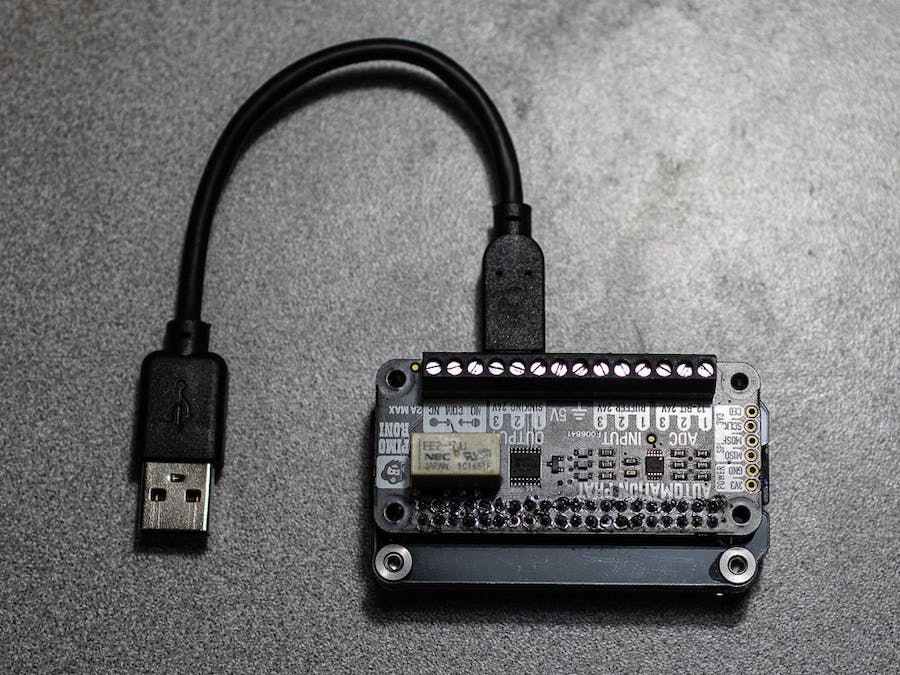 After some research, I determined the shortest path to a working RTU device would be to make some very minor changes to the Linux demo RTU application included in the FreeMODBUS Modbus RTU library (hereafter FreeMODBUS). I ran the modified RTU demo app on a Raspberry Pi Zero running my own MuntsOS Embedded Linux, configured as a USB Serial Gadget device.

This Make with Ada project illustrates how to implement the service handler callback functions in Ada, instead of C. It allowed me to quickly and easily leverage an enormous amount of Ada embedded systems code, from both my Linux Simple I/O Library (hereafter libsimpleio) and MuntsOS Embedded Linux (hereafter MuntsOS) repositories.

When a Linux microcomputer is configured as a USB Serial Gadget device, its USB port is configured for a very special form of serial port emulation. When you plug the device computer (e.g. a Raspberry Pi Zero) into a host computer (e.g. a Linux or Windows PC), the host computer will see its end of the USB cable as an ordinary USB serial port, named something like /dev/ttyACM0 (Linux) or com9: (Windows) and the device computer will see its end of the cable as serial port device /dev/ttyGS0.

Often the host computer (Master) can supply power to the device computer (RTU) via the USB cable, too.

This MuntsOS application note (page 6) describes how to set up a Raspberry Pi Zero as a USB Serial Gadget device. Note that for this Make with Ada project, the OPTIONS word in config.txt must be changed to 0x7AC instead of 0x72D to prevent mgetty (the serial console login manager in MuntsOS) from acquiring /dev/ttyGS0.

Although the examples in this Make with Ada project use a Raspberry Pi Zero Wireless for the RTU, because of its low cost and low power consumption, other Linux microcomputers such as the BeagleBone Black, PocketBeagle, and other Raspberry Pi models can be used as well. Example #1 has been tested on a Raspberry Pi 4 Mode B.

Source code for the RTU framework is stored in the MuntsOS code repository, in the directory examples/ada/freemodbus/. There you will find a make include file, some patch files, and a C main program.

The make include file freemodbus.mk defines rules that download the FreeMODBUS RTU library source code distribution tarball, unpack it, patch the source tree, and compile all of the C code required to build an RTU application. freemodbus.mk must be included by each RTU project Makefile.

The RTU application C main program has been adapted from the FreeMODBUS Linux example. It has been modified to call adainit() to elaborate the Ada packages and then call daemon() to run as a background process.

Each RTU project must contain two files customized for the particular project: Makefile and freemodbus-services.adb.

Providing Ada service callbacks to the FreeMODBUS C library is accomplished by using some special features of the gnatbind and gnatlink programs.

The following RTU project make target extracted from the Makefile for Example #1 shows how to combine a C main program, Ada packages, and libsimpleio.so into a working program:

First the subordinate target modbus_rtu_mk_freemodbus (defined in freemodbus.mk) cross-compiles all of the FreeMODBUS C code as well as the C main program.

gnatbind -n indicates there will be no Ada main program. Instead, gnatbind will append a subprogram called adainit() to one of the .ali files in the object directory. It is not obvious to me how gnatbind selects which particular .ali file, which will have to be explicitly provided to gnatlink for the next step of the build process.

Finally gnatlink links all of the objects and libraries into a single program file and strip reduces the size of the program file by removing unnecessary debug information.

As part of this Make With Ada project, and in order to validate the RTU device framework, I also needed to write some Modbus master device support code in Ada. I accomplished this by adding the following six packages to libsimpleio (links are to the package specification files):

I used a Raspberry Pi 4 running Raspbian for the Modbus master device, compiling the test program with the Debian native GNAT toolchain.

This Modbus master test program toggles the relay once a second and then displays the states of the digital inputs and outputs as well as the analog input voltages.

This Modbus master test program displays the analog voltages at IN1, IN2, O1, and O2 once a second and then sets output O1 to match input IN1 and O2 to match IN2. Exception handlers prevent setting the outputs above 2.048V.