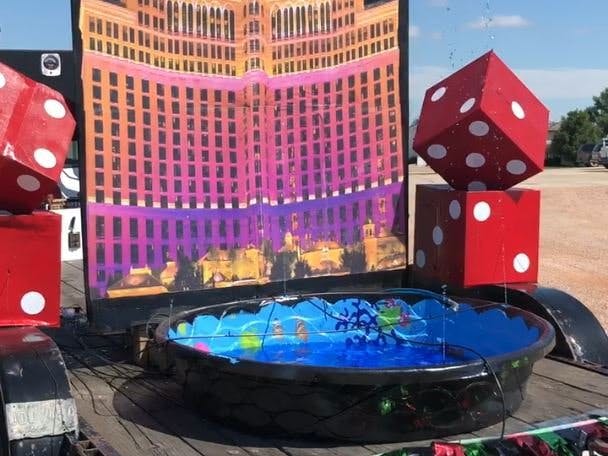 You want to dominate the next Las-Vegas-themed parade float competition in your local town? I did!...by building a miniature version of the famed Bellagio water show to be carried on a parade float. Using a Raspberry Pi to control a bunch of solenoids timed to music while a pump pushed water from a kiddie pool through some sprinkler hosing.

Final product - mounted on back of the float

The control board consisted of a Raspberry Pi connected to 9 relays. One of the relays was used to turn on the pump, and the other 8 were used to open and close the solenoids in time to the music. I had a 7" screen connected to the PI for debugging.

I also mounted 4 audio speaks (two 5.5" midbass and two 1.5" tweeters) on the front of the board and mounted two amps behind the front. I did this to have one portable unit to put on the float.

This was all powered by 12V car battery so it could be mobile. I used 4 marine rocker switches to serve the man on/off functionality. From the switches, I distributed power through a automotive fuse box since the control board was going to on one side of the float and the 12V solenoids were on the other side. Safety was a concern.

I used 8 12VDC water solenoids from Adafruit and connected them to to 1/2" PVC. Each solenoid was connected back to the control board by way of a mechanical relay (which was controlled by the Pi).

Seven of the eight solenoids were connected to brass reducers to fit into garden sprinkler hosing. Those are pictured across the top. The 8th solenoid on the bottom left was a pressure control (relief) valve. It was used to control back pressure in the "system". When I wanted to "fire" one of the 7 solenoids to shoot water, I would close the pressure value, which would build up pressure in the PVC pipe, then open the desired solenoid so a jet of water would shoot out. This was required to get any distance with very little water. I also didn't want to burn out the pump so the relief valve was open when no other solenoid was open.