My drone is built to deliver life saving medicine or devices on scene prior to firefighter arrival, since most emergencies are medical.

My drone is built to deliver life saving medicine or devices on scene prior to firefighter arrival, since most emergencies are medical. 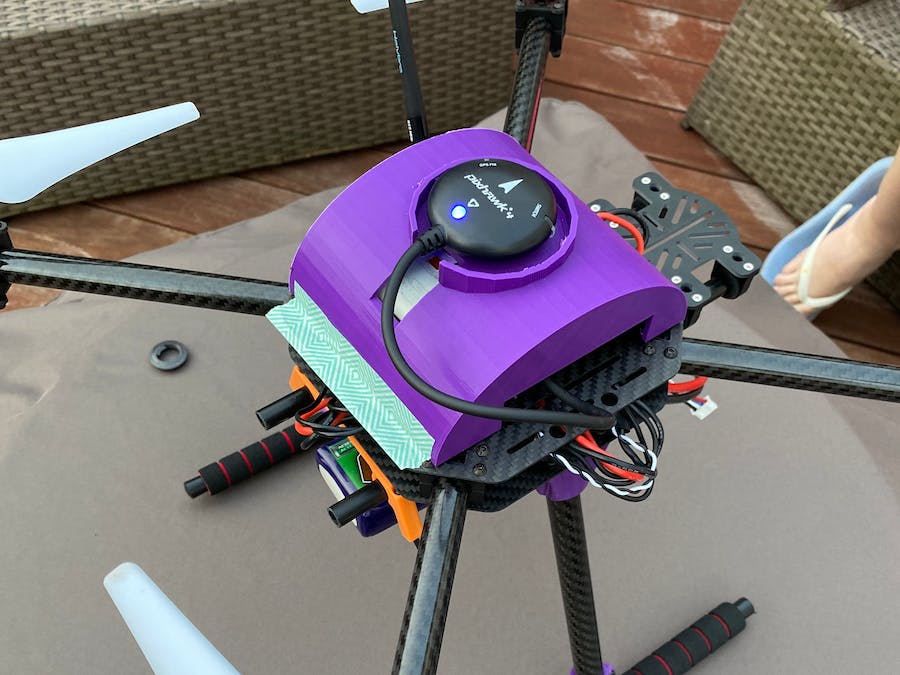 According to NFP statistics, over 60% of calls for firefighters are for medical reasons. Until my daughter was diagnosed with Type 1 diabetes 3 years ago, I was not aware of how many people are dependent on critical medicine or devices for daily living. My goal of this project was to provide drones which could deliver small medical equipment like AEDs or medicine like insulin to locations ahead of emergency personnel arriving.

As I thought more about this project, I determined several advantages to using drones performing this delivery:

2) Quicker response by drones to emergencies since navigation of traffic, especially during rush hour, is not necessary.

This project also served another purpose for me and my daughter. She is extremely interested in STEM related fields and I thought it would be a good opportunity for us to both build and learn about drones since neither one of us had been exposed to them.

After receiving the initial drone kit, my daughter and I spent about 3 weekends putting the drone together. We no experience in building such a kit, it took longer than it probably would for other people.

We managed to finally piece everything together and were ready to fire it up.....

After borrowing some batteries from friend, we decided to fire up the motors indoors without blades. The drone startup fine....... ran for about 30 seconds..... and then we started smelling smoke. Within a few seconds, one of the motors was on fire!!!! I quickly unplugged the battery to shutdown the drone. The next day, I contacted the contest judges to see if I could get a replacement motor. They were great and sent me a new motor, which I received a few weeks later.

After rebuilding the drone with the new motor, we decided to try again with the indoor motor test. Whew.... no smoke or flames this time. However, one of the motors was still running slower than the others after all the calibration steps,etc. Being new to drones, we were not sure how to go about troubleshooting this issue. So, I contacted the contest judges to see if they had any advice. After several correspondence, it was determined that maybe my ESC controller had been damaged by the fire, so they decided to sent me a replacement ESC. So, we decided to not fly it until we replaced the ESC....

After we got the replacement ESC, we had the complex task of replacing the ESC, which involved almost a full disassemble of the drone. But, we were able to get it put back together and ready for its maiden voyage. The new ESC seemed to work better than the previous one and the motor speed seemed pretty close to the other motors. So, we decided to take it for a spin in our backyard.

Although we had a little success with the backyard voyage, we did not realize that the drone was not really flying as it should since we were both novices in the drone world. So, we decided to tackle a longer flight in a larger area.

One afternoon, we set off to fly the drone in an open soccer field away from trees, houses, and other obstacles. After arriving, we were both excited to fly the drone for as long as the batteries would last.... but the drone had other plans.

We sat the drone down and proceeded to lift off the ground. The drone spun around about 3 times and then hovered for about 20 seconds.... then immediately flipped upside down and headed straight for the ground. As it crashed, it broke the pole for the GPS antenna and a joint for one of the drone legs. Our anticipation of flying the drone for hours had been vanished in 20 seconds.....

Due to us both being new to drones, we were not really sure how to go about determining what went wrong with our maiden voyage. After several discussions with drone "experts" and lots of Google searching, I finally determined there was a log file I could pull from the drone that would tell us what happened on the Maiden Voyage. After review of the log file, I determined that for some reason the drone lost RC communication with the controller and took emergency landing actions. Unfortunately, that resulted in it turning upside down, possibly due to GPS confusion, and flying straight into the ground.... I wasn't really sure why this happened or how to prevent it in the future. But, despite that, I knew we had to fix the GPS antenna pole and the leg joint. After 3D printing both replacement pieces, we put the drone back together for the next voyage. Additionally, I ordered some replacement motors just to have for spares in case we had another fire.

Feeling like the Wright Brothers, we gathered up the drone and proceeded to go back to the same field as our previous failure. Again, we were excited about the possibility of flying the drone for hours.....

The drone lifted off the ground and hovered for about 30 seconds about 8 feet off the ground. After the initial liftoff, we decided that we wanted to try landing it just to see if it was possible to accomplish. As the drone proceeded toward the ground, it start gyrating back and forth and then landed hard, flipped over and broke the pole for the GPS antenna.

Although we had previously 3D printed the pole for the GPS antenna, we had not thought to print multiple copies of it because it would be so easily broken. So, with disappointment in hand, we packed up our drone and went home....

After thinking about the mounting of the GPS antenna on the stock drone kit, I became convinced that it was going to break on every landing where we don't land perfectly and the drone tips over. So, I set off to design in Tinkercad a dome that would house the GPS antenna, but could withstand rollover events upon landing of the drone. Here's the designed dome for holding the GPS antenna.

After a few iterations of perfecting the dome design, we finally felt we could fly with the dome and were ready to take a crack at it again.

Once we attached the dome to the drone, the safety provisions of the drone would not allow the motors to start. The error message provided in QGroundControl indicated that we had inconsistent compass readings. No matter how many times we re-calibrated the drone, we could not eliminate this error message. After more research, we determined some Mavlink commands which would show us the current compass setting values. When using these commands, we discovered there were actually multiple compasses within the drone, which was news to us. There appeared to be an internal compass in the FMU that was not being re-calibrated when the entire drone was calibrated. After more Google research, we were able to find a Mavlink command that would disable the second compass. Whew..... this now allowed the motors to start and we could then attempt our third flight.

Despite all the setbacks, we were still determined to get the drone flying! We proceeded to pack up all the spare parts, batteries, spare screws, special screwdrivers, and anything else that might prevent our failure and marched off to the same soccer field. This time, we invited one of my friends who had been flying drones for several years in case he had any pointers to help us achieve liftoff successfully.

As with anything, we did not make as much progress as we would have liked to on this project. So, we have the following items left to do:

Hopefully, in the coming weeks, we will get some time to complete this design and get our MediDrop Delivery drone functional. Many thanks to the contest organizers for the opportunity to compete in this endeavor.