Just in time for Halloween! This robotic doll uses Adafruit Feather HUZZAH ESP8266 as her brain. Let's make it smarter.

Just in time for Halloween! This robotic doll uses Adafruit Feather HUZZAH ESP8266 as her brain. Let's make it smarter. 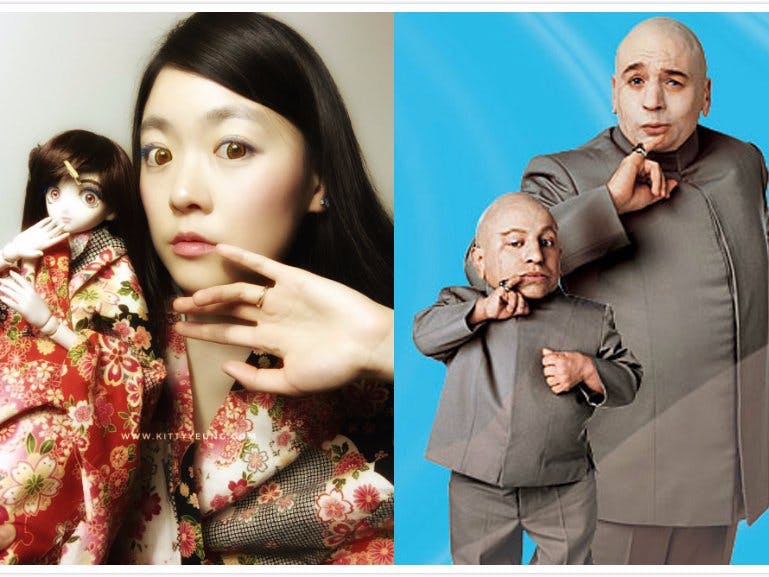 How did I do the Halloween look-alike?

While I'm still waiting for Culture Japan's fully robotic SmartDoll, why don't I start making my own version?

I used a DolfieDream as my base. From their website, you can buy different figure models, wigs, eyes, eyelashes, etc. to fully personalize the look.

The head comes with a plain face. I bought their make-up kit which contains tools and acrylic colors to paint the face. They also have different eye options: cartoon-like ones and more realistic ones. You can use hot glue to fix them in their heads. But if you'd like to change them, you can use their eye putty, which makes temporary but strong hold of the eyes.

Some people think dolls are creepy. But if you make one that somewhat looks like you, maybe not too bad?

Just like an empty pumpkin, by adding a microcontroller + servo, you can make her head move! Here is my Mini Me prototype 1.0. This was actually made when I just started playing with open-source hardware a couple of years ago. I was a novice back then but learnt a lot by working on an InMoov robotic project. There I used an Arduino Uno to control a servo. All the cables and breadboard were dangling around. The Uno was connected to a laptop which used MyRobotLab interface to sweep the servo.

However, I'm a fan of gracefully hiding electronics. The servo was hidden in her head but a board much smaller than an Uno was needed. I put the project aside, until I grew experienced working with all kinds of different maker boards. And then I received an Adafruit feather HUZZAH from Hackster.io recently. Time to get back to this project!

She's wearing the dress I designed for my best friend's wedding, which I mentioned at the bottom of this project~

Also in one of her eyes, there's a small camera. I dig around a lot to find one that's small enough to put in her eye. Then I found out that I didn't have the driver to use it. I knew how to control a USB camera and do face tracking, color recognition, etc. But I didn't have a small enough USB camera. More discussion on the doll's functionality later.

Finally I have a powerful small board that can be hidden together with a servo and a battery all in the doll's head. Adafruit Feather HUZZAH comes with an ESP8266 WiFi module. By setting up an Adafruit IO for the servo (described step-by-step in this tutorial), you can control the movement of the doll completely wirelessly.

I also love that it already has the LiPo battery connector on it. Great for prototyping.

These are all you need. Please follow this tutorial to set up the Adafruit IO and the wiring.

Always do tests before the assembly.

Here is how I added the servo into her head. I used epoxy to glue a servo onto her neck spine. I made a transparent skull with an opening using the top part of a plastic bottle. The plastic is taped around her head with her special skin-colored tape (bought as DolfieDream's accessory). Then pinned the servo arm (how do you actually call it?) onto the plastic so that when the servo arm rotates, the epoxy part stays still and the arm drags the plastic which drags the face to move. It may not be the best way to do it. I'll discuss the mechanism and limitations later.

Yes, those two white things are her eye balls. Fixed inside her head with skin-colored putty.

Oh and where's her actual skull? It's been planted with blue hair. My never-ending project only suitable for multitasking... You can absolutely use her actual skull instead of a plastic bottle... unless you are as crazy as me...

Put the whole circuit inside her head.

Hide everything with a wig!

Sure, you could hide the circuit in her robe but it wouldn't work if she's changing into a skin-tight shirt.

Say it's creepy one more time? I use her as my sketch model. This particular look inspired me to do the following painting.

The DolfieDream doll is not designed to be a robot after all. This is how her neck spine looks like which is pretty difficult to fix a servo on top.

Let me know if you have good ideas.

It'll be so cool to make her whole body movable. It'll need custom electronics designed to replace the current plastic "bones". How do I make super tiny servos to move her joints?

I'd also like to make her smarter - to be able to listen (microphone), to talk (speaker), to see (camera), to think (machine learning) and to respond (combination of all). Current modules may still be too big for her small body. That's probably why Culture Japan is also making gigantic SmarDolls. Probably easier to fit electronics inside. Let me know if you have solutions.

Maybe it's time to create a completely new robot... MUHAHAHAHAHAHAHA~~~

Pages from my graphic novel, Monologe 1 - The Future - Origin of the Universe. This robot can record your memory.