With the aid of a functional and dreamy bracelet, your nails light up and twinkle!

With the aid of a functional and dreamy bracelet, your nails light up and twinkle!

About half a year ago, after seeing my tech-fashion designs, a friend sent me a music video (I can't find which video it was anymore. Maybe readers here can help). It had a few human robots in light-up dresses but an additional thing I noticed was their LED nails. I thought it would be cool to make some.

I want to make the nails look natural and not too long or bulky. I also want to use microcontrollers to create a twinkling effect. But since the nails are so small compared with modular electronic components, I have to come up with a solution. What if I make a beautiful bracelet that can hide the electronics inside and link to the nails?

Here comes two versions. I'll describe the different processes. Design 1 is easier to do which took about 2 hours, whereas design 2 took about 4 hours. Which one do you like more?

Side note: I used to like painting my nails (not manicure but actually drawing stuff on the nails). I have stopped for years since the fume is unhealthy and the process is time-consuming. But here sharing some old nail art. Yep, I'm mostly right-handed but one thing I can do with my left hand is to draw onto my right nails.

For this project, SparkFun LilyPad LEDs, coin cell battery holder and LilyTwinkle are used. All these components are thin and directly sewed together with conductive thread. The circuitry just needs to follow the rule in the below diagram (for beginners, see example tutorial here). All ground lines go to "-". The nice thing about LilyTwinkle is that it's already pre-programmed to blink the 4 ports randomly. (If you want to re-program it, check out this tutorial.) I chose to use 4 LEDs exactly as this diagram so that each LED is on one of the long fingers. You can add more LEDs (will provide a schematics for that case at the bottom.) and of course can share one of the ports to have a 5th trace for the thumb.

Always, always test the circuit before sewing any connections.

Then you are good to start sewing the components onto the tulle. Here's a tip. Tulle is flimsy and not very easy to sew thread onto, even if you use an embroidery loop. After sewing the first trace, I realized a better way. You can lay the tulle onto a piece of paper and draw the traces out based on the lengths of your fingers. Sew along the traces by poking the needle through both the tulle and paper. The rigidity of the paper gives you a very good grip, allowing definition of the traces.

As a maker known for making nerdy stuff pretty, I'm usually not satisfied with bare circuitry. I'm pursuing a look that the whole nails would light up, instead of point light sources, thus adding the faux nails. This is the first time in my life dealing with faux nails (can't wear them unless I cut them short, need to play the piano.). I'm very happy with the strong grip of the glue on their back side. Directly stick them onto the LEDs. The faux nails are thin and diffuse the light so the whole nails glow!

Notice that the LilyPad battery holder and LilyTwinkle are already decorated with gem stones. There are many ways to decorate them. I just have loads of gem stone leftovers from the tinyTILE dress.

It is immensely satisfying to peel off the paper. On the back side, apply double-sided tapes. You can also sew on some ribbons to attach to your hand but double-sided tapes are easy, disposable and re-applicable.

Now put the whole thing on your hand! It's great the tulle is soft yet has enough resilience to prevent the conductive threads from crossing and shorting the circuit.

I wish there were other colors of conductive threads though. Or I need to coat it somehow to make them less visible or change the color of the tulle, though I really like the white bubbly look.

Design 1 perhaps is not the most practical decoration to wear. I made another one that's more concise and also hide the conductive threads like a feature of the design.

Cut some lace ribbons into lengths based on the placement.

Again start with testing the circuitry.

Bad example in this picture though. I shouldn't have the battery in. During construction, it is very easy to have the ribbons touch each other and short the circuit and the battery will heat up and get drained. In fact, even after you finish the final product, always remove the battery when you are not wearing it.

Here comes the tricky part. LilyTwinkle ports are very close to each other. We want to divert the negative traces away from the positive ones already sewed onto the ribbons. Luckily we live in a 3-dimensional world. I added another ribbon to dedicate to the ground/negative line. So the positive traces are mostly on the back side of the hand and negative traces go around onto the palm side.

Now you have a structure, you can decorate. Put double-sided type behind the faux nails as in Design 1. This time you can add a ribbon onto the battery holder to tie around the wrist. Also, I added the gem stones on the finishes of conductive threads. This helps stabilize and insulate the threads.

Pretty, right? Can someone please commercialize this and just remember to credit me? I just don't have time to do it...

This will be a gift for a precious friend. It will go well with this wedding dress, which I designed for her.

The principle of making these bracelet twinkle nails is simple. You need to find the right "substrate" for the conductive traces. A glove would be an option but I highly recommend against it. Nails look pretty on fingers. Having nails coming out of a glove made of fabric will look creepy. Go for it if it's for Halloween. Perhaps a lace glove would work.

What would be the most beautiful is to have chains as the conductive traces. But unless I get special chains or treatment on the chains, it'd be so hard to avoid crossing and insulate them from the hand. Until then, this remains a romantic idea. 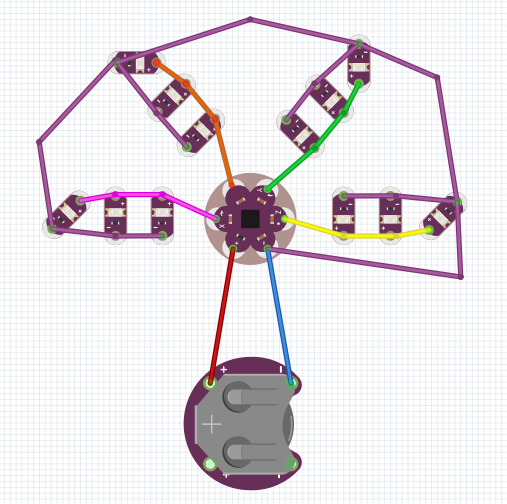