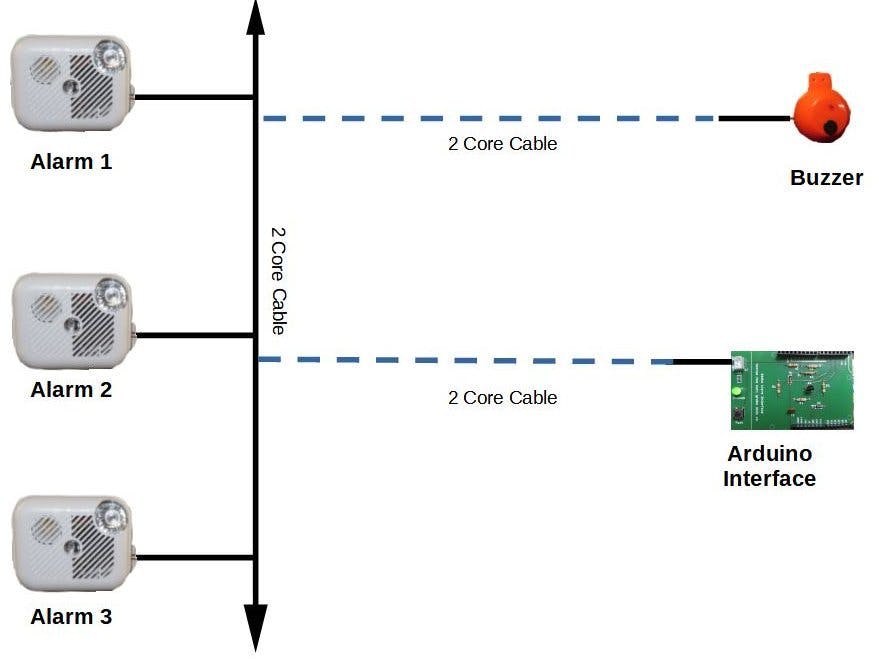 This project allows one or more Smoke Alarms to be monitored by an Arduino. It involves creating a Shield PCB and modifying a smoke alarm to connect to the shield. Also included is a remote buzzer that is activated by a Smoke alarm or the Arduino.

Here we describe how to:

Section 1: - Add the modification to the Smoke Alarm.

The smoke alarm is modified by adding the components R9, Q1, R10 and a 2 pole JST connector shown in this diagram:

The other components shown, with the blue wiring, are an approximate diagram of the internal components of the Escape Light section of the smoke alarm.

For this alarm the orange wire on the lLED was found to be connected to the +ve battery connector – marked (1) on photo. The other side of the LED then is (2). Using the multimeter, (4) is found to be ground (-ve on the battery).

If you have the Kiddie alarm proceed to 1.2

There are two 9 volt PP3 batteries in smoke alarms with an ‘Escape Light’ feature, here the connector is shown:

Battery Connector - note what the + terninal looks like on the connecor

Find the connector that powers the Escape Light:

Remove both batteries and with proceed to check the lamp battery connector with a multimeter set to continuity beep.

The other battery connector is ground (-ve) so mark it #4 as in the diagram. Note if you find that the +ve battery connecor is not connected to the escape light at all and instead it's the -ve battery connector then you will need a different modification - this is not described here so instead see the procedure here: http://tek4um.com/smokeAlarm/

1.2Solder on the wires & resistors for the BC237 PNP transistor.

Note the BC237 PNP transistor connections as in these photos:

Cover solder joints and resistors with heat shrink sleeving with a heat gun or the soldering iron.

1.3 Connect the transistor to the alarm

In the Alarm solder:

Arduino Pin D3 is set up in the code as an output. Pin D2 is an input. D3 is set to Low (not high) to sound the (optinal) buzzer. This causes current to flow through transistor Q1 base via R4 to ground. Q1 is now saturated on and its collector, connected to R5, goes high providing ~5 Volts at alarm connector #3. R5 provides some protection if there’s a short on the cable (not tested!).

The test push button is connected to input D5 and is used in the code to active the buzzer for testing purposes. D4 output is used to turn on the status LED, useful for testing.

The Arduino can activate the Buzzer on pin 3 (see code)

Solder the components according to the buzzer module circuit diagram:

NOTE: these components are not listed in the hardware section as the buzzer module is optional. You will need the following PNP 800mA Transistor e.g. BC327, Resistors: 15Ω, 10kΩ, 82Ω, 820Ω, Zener Diode 5.1volt 500 mWatt BYZ885v1, Active Buzzer 5Volt, small project box - a cerial scoop is shown in the photos.

TheBuzzer module is fitted into a ‘easy scoop’ cereal cup, but anysimilar enclosure will do.

Section 3 Monitoring the Alarm(s) from Arduino

3.1 The alarm status can now be read on an Arduino pin D2 as follows:

Section 4 Sounding the Buzzer from the Arduino

The code snippets below sound the buzzer for TEST_TIME_DURATION if the Test Button is pressed. The test button is connected to pin SMOKE_ALARM_TEST_BUTTON (see code).

Video of the above:

4.2 Code could be added to monitor other events by connecting the Arduino to for example:

The connections can be to any free input ports, and code written to sound the buzzer. It could be beeped different times depending on the alarm that has occurred. 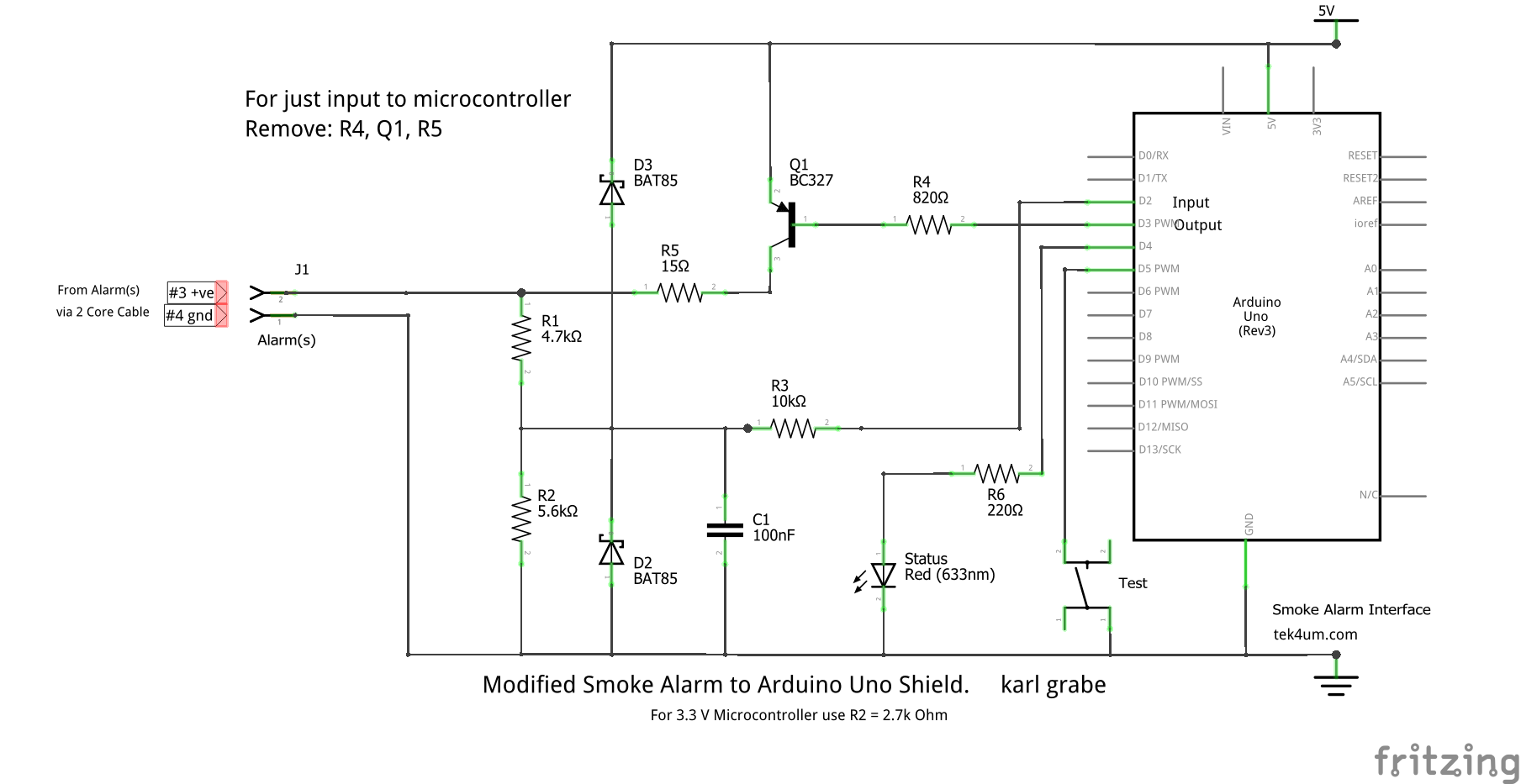