A Christmas tree whose lights you can control individually with your voice.

A Christmas tree whose lights you can control individually with your voice. 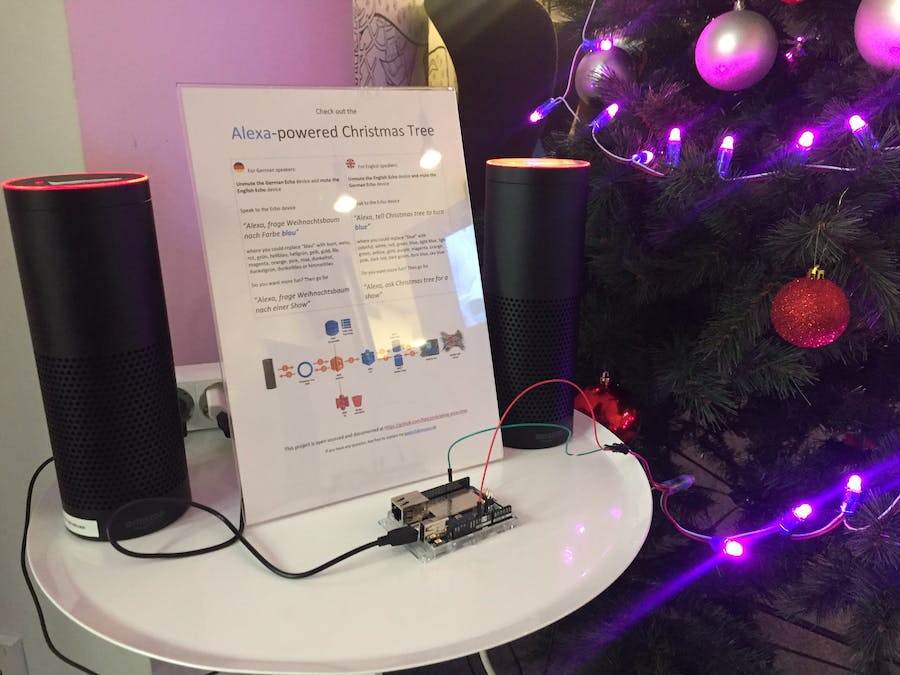 Here you can find the sources of a custom Alexa skill that controls an LED strand on a Christmas tree. This repo contains:

If you want to build your own Alexa-controlled Christmas tree with the help of these sources you need specific hardware. This project used the following components:

The following image illustrates a typical round-trip to handle a voice user request.

The solution leverages a bunch of AWS cloud services to communicate with the hardware backend - the Christmas tree. The only things you really need to set up is the Lambda function, an S3 bucket containing the MP3 files and an IAM role with AWS IoT and Dynamo permissions. The table in Dynamo as well as the thing shadow in AWS IoT will be created on the first skill invocation on the fly.

Understand what happens on a voice user request given to an Alexa device:

While Arduino does its work it lets you know of its current state over the first LED in the strand.

On startup you might see red flashlights for the period of time it takes for the Arduino to connect to the WiFi. If WiFi is connected there's the green flashlight followed by a constantly blinking blue light to indicate the tree is ready for commands.

If yellow is blinking the AWS IoT topic could not be reached. If that happens (e.g. Arduino lost WiFi connection) it keeps trying for nine more times until it automatically tries to reconnect. That said, after ten times yellow flashlight there should be red/green flashlight for reconnection progress. Once the Arduino reconnects to the WiFi and AWS IoT is reached again, the blue flashlights come up.