All my servos are a little bit different to each other - I've built a rig to measure what PWM values turn my servos to a specific angle.

All my servos are a little bit different to each other - I've built a rig to measure what PWM values turn my servos to a specific angle. 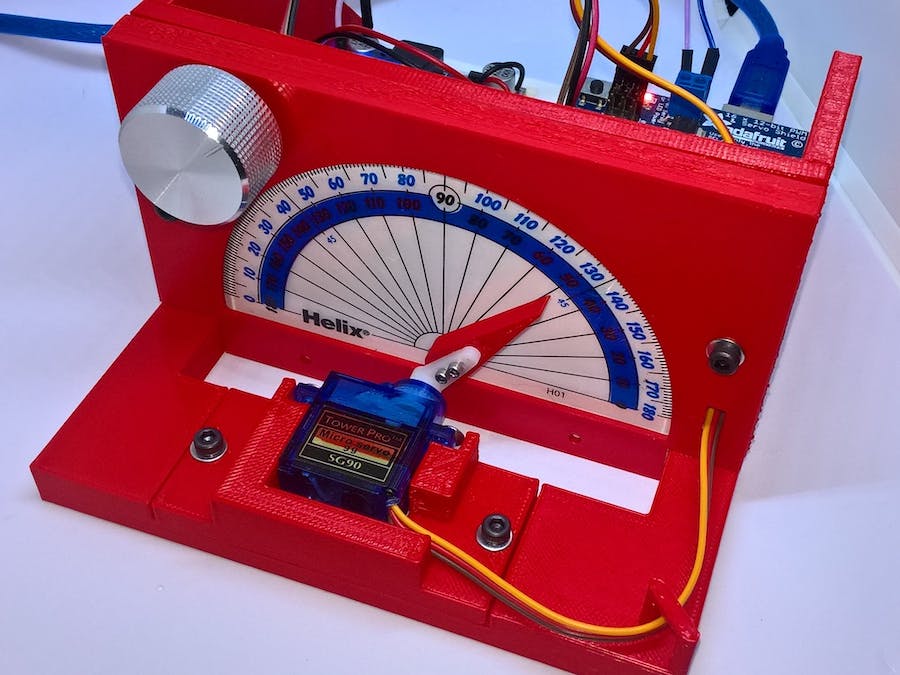 Servos finishing in different positions, despite being sent the same PWM

Why not use existing servo libraries for the Arduino?

I use the Adafruit PWM Servo Driver to drive a bunch of servos, and this allows me to send a different PWM signal to each servo. I could use the Servo library which is built into my Arduino installation - but I've a few reasons for not doing this:

Of course the 9g servos that I'm using are cheap and not designed for accuracy - but I think I can squeeze some more value from them. I want to use them for a walking robot, and need their behavior to be a bit more precise and predictable.

How can I control my hobby servos more accurately?

Confirming that my servos all behave slightly differently made me want to build a device that would allow me to calibrate a servo - what PWM values do I need to send a servo to move to a 0 degree position? Or the 90 degree center point? How do I avoid sending a PWM value which snaps the servo to an extreme position with lots of crunching and gear grinding?

I decided to combine a couple of simple concepts.

For this version, I was happy to use the Serial Monitor of my Arduino IDE to tell me the value of the PWM signal, which I can record manually.

I used Autodesk 123D to design a simple rig that would hold the potentiometer, the protractor, a single servo, my Arduino, and the Adafruit PWM servo driver along with a power supply.

I want to keep using the Adafruit PWM servo driver for my calibration as that's what I'm likely to use in my final project. If I was going to control the servo directly from a pin on the Arduino, I'd replicate that in the device and calibrate the servo against PWM from the Arduino.

I printed out each of the parts, and attached them together using the M3 bolts and washers.

The mounting holes in my device design are adjusted to fit my components - different components may have variances in the hole diameters and positions.

The end result is shown in the photographs below. By turning the knob in the top left of the device, I can control the position of the servo, and using the Serial Monitor in the Arduino IDE, I can read the PWM signal being sent to the servo motor for any given angle.

So what does the device tell me?

For my servo, I rotated it to its furthest clockwise limit, and placed the wiper on the servo so that it would be positioned just beyond the 180 degree mark on my calibration device's protractor.

I did this because I've found in my hobby servos the range of motion is usually slightly more than 180 degrees.

I connected the power to the device, and then I rotated the potentiometer knob until the servo needle was aligned with the 0 degree mark on the protractor, and noted the PWM value written to my Arduino IDE's Serial Output. Then I rotated the potentiometer until the servo needle pointed at 10 degrees, and noted the PWM value again. I continued this process every 10 degrees until I reached 180 degrees, and I've shared the results in the table below.

Relationship between servo wiper angle and the PWM value sent

I created a graph of the results (shown below), and as you'd expect it's obvious there's a strongly linear relationship between PWM and servo angle.

Now I've got some PWM and angle values that are characteristic of this particular servo - other servos might have similar characteristics, but they won't be identical.

Either way, I'm able to control this servo with more accuracy and confidence than before. It's quite a bit more effort to calibrate each servo precisely, but for my project, it's worth it for the additional accuracy.

Of course, when I remove the servo from the device I have keep the servo wiper attached, as the measurements relate to how the wiper is attached whilst it's being calibrated.

Improvements for the next version

After calibrating a few servos, I've thought of some improvements that I will build into the next version.

So that's it - my hobby servos are cheap and not designed for accuracy - and for a lot of applications, they're perfectly fine. However, I'd like to get a bit more accuracy and repeatable performance from mine, and the rig in this post helps me achieve that.