This is a companion robot capable of analyzing heart signals, using artificial intelligence and OpenVino.

OpenVino and Neural Stick 2 in a Companion Robot

OpenVino and Neural Stick 2 in a Companion Robot

This is a companion robot capable of analyzing heart signals, using artificial intelligence and OpenVino. 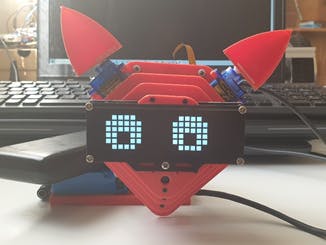 OpenVino and Neural Stick 2 as embedded AI tools in a companion robot for the detection of cardiac anomalies.

Computer systems often have the CPU supplemented with special purpose accelerators for specific tasks, known as co-processors. As deep learning and artificial intelligence workloads increased in importance in the 2010 decade, specialized hardware units were developed or adapted from existing products to accelerate these tasks. Currently, among these specialized hardware units stand out the Google Coral and the intel Neural Stick 2.

Intel Neural Stick 2 (NCS 2) is aimed at cases where neural networks must be implemented without a connection to cloud-based computing resources. The NCS 2 offers quick and easy access to deep-learning capabilities. All this with high performance and low power for integrated Internet of Things (IoT) applications, and affordably accelerates applications based on deep neural networks (DNN) and computer vision. The use of this device simplifies prototyping for developers working on smart cameras, drones, IoT, robots and other devices. The NCS 2is based on an Intel Movidius Vision Processing Unit (VPU). However, it incorporates the latest version, the Intel Movidius Myriad X VPU, which has a hardware accelerator for DNN inference.

The Intel NCS 2 has become a highly versatile development and prototyping tool when combined with the Intel Distribution of OpenVINO toolkit, which offers support for deep learning, computer vision and hardware acceleration for creating applications with human-like vision capabilities. The combination of these two technologies speeds up the cycle from development to deployment: DNNs trained on prototypes in the neural computing unit can be transferred to an Intel Movidius VPU-based device or embedded system with minimal or no code changes. The Intel NCS 2 also supports the popular open source DNN Caffe and TensorFlow software libraries.

In addition, incorporating technologies for the use of DNN in the NCS 2 makes it a useful tool for the design of diagnostic systems in medicine. It is only necessary to have one or more of these devices and any computer or even a Raspberry Pi to turn it into a diagnostic system with AI. For this reason, my project incorporates one of these NCS 2, to classify an electrocardiographic (ECG) signal as:

· No - Too noisy to classify

To achieve this classification, it is necessary to have a correctly labeled signal dataset. The dataset used for this project was used in a cardiology challenge in 2017 on the physionet website.

There are different ways to address this problem of classification, in my case I have chosen to convert each of the signals present in the database to an image.

In order to obtain good results when classifying the signals I have tried to solve the problem from two sides: To make a classification using the signals in the time domain (Figure 2) and in the frequency domain, by using the image of the spectrum of the signal (Figure 3).

In this analysis I use Mel Frequency Cepstral Coeﬃcients (MFCC) for voice detection. This approach extracts the appropriate characteristics of the components of the signals that serve to identify relevant content, as well as avoiding all those that have little valuable information such as noise.

To facilitate training, the option to display the axes on the graph has been disabled, as shown in Figure 4.

To classify the anomalies detected in the ecg signals it was necessary to balance the dataset, meaning that all classes had the same number of samples. In this way, the over-training of one or several classes is avoided. For this reason, the new dataset consists of 772 images for each class, for a total of 3088 images.

One of the problems encountered when performing signal-to-image conversion is the edge that matplotlib inserts into the ECG signal plot (Figure 5).

Figure 5, Extraction of the area of interest.

Once the area of interest was extracted, the image was resized from 1500x600 to 224x224 pixels. This new image size is compatible with the mobilenet network architecture.

To carry out the training of the model I have used two tools, the first is an on-line training tool called teachablemachine.

The second was the conventional method of on-site training using Python 3.7, keras and tensorflow. With these two methods a comparison can be made to determine which model is best to use.

Figures 7, 8, 9 show the results obtained when training the model with the on-line teachablemachine tool without performing the extraction of the area of interest.

The training parameters were:

The next step after training the model, is to perform system validation using real ECG signals. For this purpose, our system was equipped with a signal acquisition system that has an ADS-1115 analog-to-digital converter (Figure 13).

This analog-to-digital converter has four channels, which would allow us to acquire four signals. In our case we will use 1 channel:

In one of the first tests carried out with the ADS-1115 system, a photoplethysmography sensor was used to observe the variation in blood volume as a result of cardiac activity. It was decided to perform the test with this signal as it is easy to capture. The results of this test can be seen in Figures 14, 15 and 16.

Once the biosignal acquisition test has been performed using the data acquisition system, the next step is to capture the ECG.

The ECG is a test that is often taken to detect heart problems in order to monitor the condition of the heart. It is a representation of the heart's electrical activity recorded from electrodes on the body surface. The standard ECG is the recording of 12 leads of the electrical potentials of the heart: Lead I, Lead II, Lead III, aVR, aVL, aVF, V1, V2, V3, V4, V5, V6 (Figure 17).

The disadvantage of the ECG is the complexity of installing all the electrodes and the equipment needed to perform signal acquisition.

In our case, we will only focus on the electrodes that capture lead I, II and III. To perform the acquisition of these signals, we only need three electrodes located on the limbs as shown in Figure 18.

To acquire this signal, a differential amplifier is needed. For our project, we use the AD8232 (Figure 19).

The output of the ADC8232 is connected to channel A0 of the ADS-1115. Then, using the Python library for the Raspberry Pi we acquire the signal. This signal is shown in Figure 20.

Figure 20. My ECG signal acquired by the robot.

Once the capture and the pre-processing of the signal is done by applying stop-band filters, to remove the noise at 50 Hz, the next step is to convert it into an image, so it is necessary to remove the axes of the plot.

The image obtained is used to validate the model from our computer. At this point we have not used Openvino or the Neural Stick.

With a normal ECG classification result, my heart function is considered normal which is confirmed by my last medical check-up. The next step is to convert the model obtained from the training to files that openvino can understand. This process requires some important steps, the first one is to install Openvino, for which we refer to the instructions given by Intel. The installation steps vary according to our operating system (In my case, my operating system is Windows 10).

Once the Openvino is installed, the next step is to create a ventilation environment:

Once installed, the next step is to find the files that Openvino has installed:

Being within an environment, it does not allow us to install as --user the necessary requirements, so we modify the files. The first one is install_prerequisites we look for the word --user and we remove it. Once we have edited this file we can install the prerequisites.

With the installation completed with our model in.h5format, the next thing is to convert this model into a.pb model. To do this, we use the following code:

This will return a file "XXXX.pb". Then, the next step is to look for this script mo_tf.py in the folder where Openvino was installed. Once in this folder, it is important to create a folder (if you want) that is called models and from the command terminal (cmd), we write this:

If all goes well, we'll have to have these files at the end of this process:

With the acquisition system, the validation of the model with the captured ECG signal and the transformation of the.h5 model to Openvino compatible files, the following is to integrate this system into the company robot, as shown in figures 21, 22 and 23.

The company robot is built with a Raspberry Pi 4, as a control and process unit. It has two micro servos which control the ears and a servo for neck movement. In order to improve the expressiveness of the robot, it has been added a 24x8 LED Dot Matrix Module - Emo from the company sunfounder. A 3D model can be seen in Figure 24.

The robot control process is done using SPADE, which is a multiagent system platform written in Python and based on instant messaging (XMPP). This platform allows me to see my robot as an agent, that is to say, an autonomous and intelligent entity which is capable of perceiving the environment and communicate with other entities.

SPADE needs an XMPP server, so we decided to use Prosody's server that was installed on a pi raspberry. At the same time and in order to receive the messages that the robot sends when it finishes the signal analysis, I connected my smartphone to the XMPP server using the AstraChat application. This way the robot can send as messages the results of the analysis.

This communication is done through the passage of messages, similar to having a chat between different entities and allowing the user to be included in it.

State 1 is the initial state. State 2 is in charge of receiving messages from other agents or messages sent by the user using an XMPP client. State 3 is in charge of sending messages to other entities or to the user through the chat, and allows sending the result of the classification, that is, if the user has a heart problem. Finally, state 4 is in charge of controlling the robot.

To support the companion robot, it is necessary to use a chest harness as shown in Figure 25. This harness will allow us to hold the robot at shoulder height and in the central part of the harness, we will place the ECG signal capture system.

Figure 25. Chest harness to hold the robot and ECG module.

The robot can be programmed to perform ECG signal capture. This capture can be done every two minutes, three, etc. It is important to note that the robot will capture the heart signal for one minute, during this period the robot does not perform any other action. In order that the user knows that the robot is in this state, the eyes of the robot are transformed into two hearts (Figure 26-A-B-C). 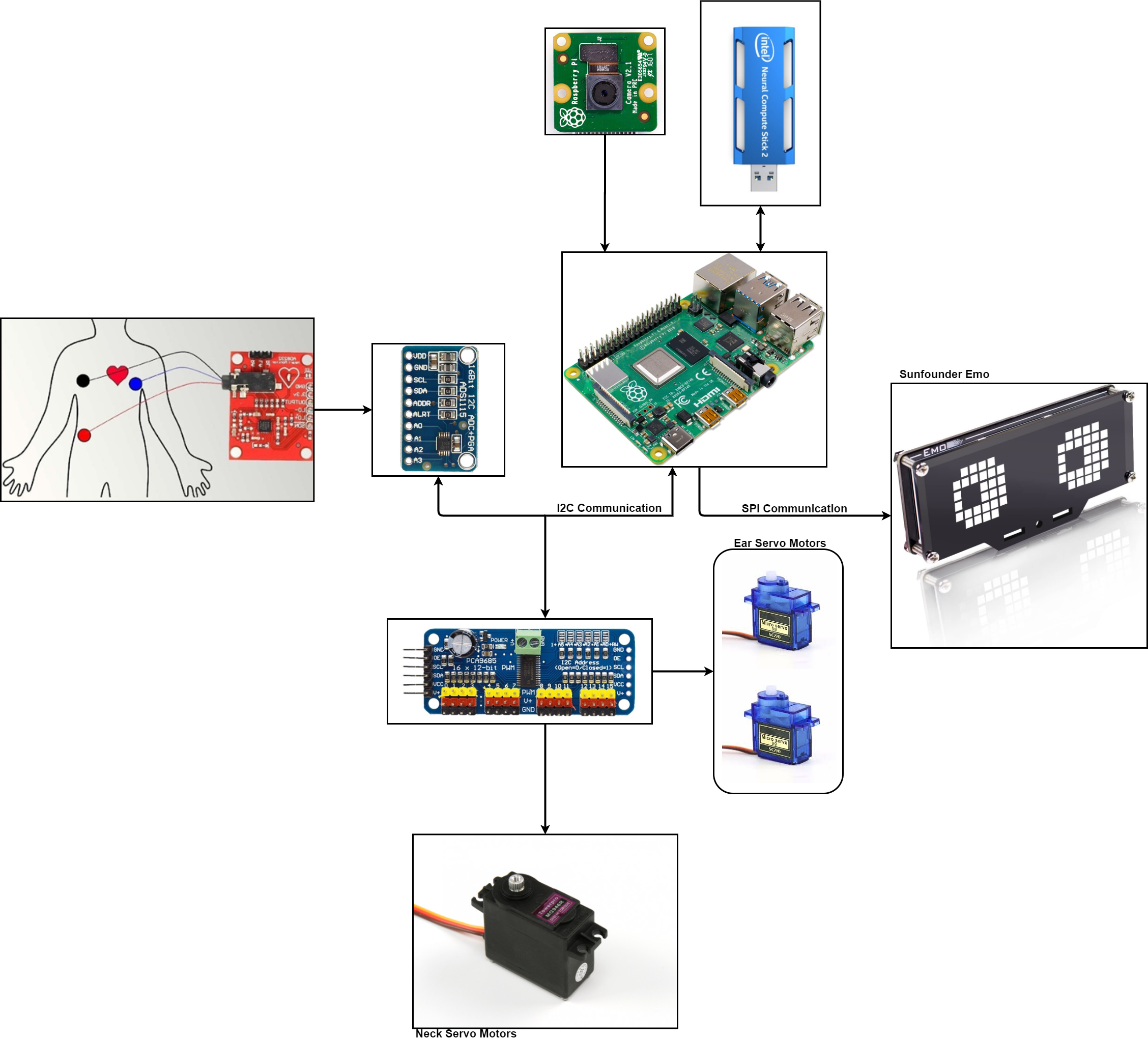