Robot arms are awesome! In this tutorial we explore how to control one of them using a Nunchuk and an Arduino Mega.

Robot arms are awesome! In this tutorial we explore how to control one of them using a Nunchuk and an Arduino Mega. 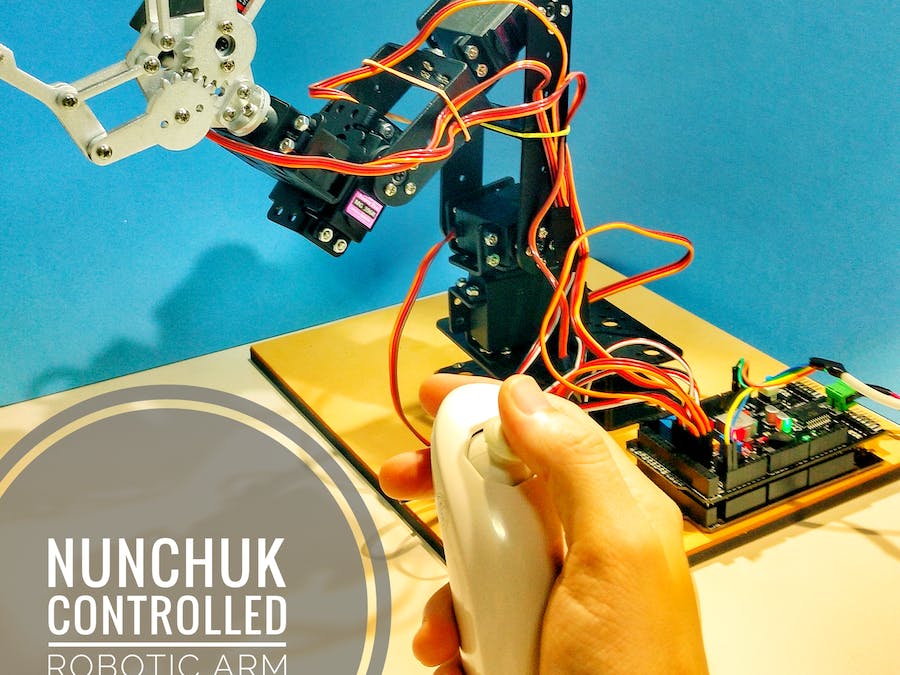 Robotic arms are awesome! Factories all over the world have them, where they paint, solder and carry stuff with precision. They can also be found in space exploration, subsea remote operated vehicles, and even in medical applications!

And now you can have a cheaper version of them at your own home, office or lab! Tired of doing a repetitive job? Program your own robot to help you... or to mess things up! :D

In this tutorial I show you how to mount a robotic arm, and how to program it using an Arduino Mega. For this project I also wanted to experience a different method for controlling a robotic arm: using a Nintendo Nunchuk! They are cheap, easy to find, and have a bunch of sensors.

There are several ways you can use this tutorial. If you don't have a robotic arm kit (and doesn't want to buy or build one) you can still use it to learn something about Arduino programming, and how to interface an Wii Nunchuk to your own projects. You can also use it to practice your electronics and mechanic skills.

The following tools and materials were used in this project:

I was informed later that there's a Nunchuk adapter that makes the connection to a breadboad easier (link / link). It's a good option if you want to same some time on soldering and doesn't want to destroy the original connector as described on Step 9.

You might find other robotic arm kits online, or even design your own. There are some awesome projects you can 3D print, for instance.

In the following 7 steps I'll show you how to assemble the arm kit before wiring up the circuits. If you doesn't have a similar kit, feel free to jump some steps. You can use another robotic arm kit, assemble it and jump directly to the electronics and programming steps.

At each step, there is an animated gif, showing how my robotic arm was assembled. It only runs on website's desktop version.

The first part to be assembled is the base of the robot.

It's made of two U shaped brackets, joined back to back using four M3 bolts and nuts, as shown in the pictures. This is propably the easiest part to be mounted.

A circular metal horn is attached to the servo axis. The kit comes with several plastic horns. They won't be used for assembling the robot.

Another servo bracket is mounted perpendicular to the previous one. It's connected to servo #1 horn using four M3 bolts. Servo #2 is installed with four M3 bolts and nuts, and also uses a circular metal horn.

An U bracket is then attached to the horn using four bolts. Notice that a M3 bolt is used oposite the servo axis. It gives stability to the structure. A bearing fits on this bolt, and it's locked in position using another M3 nut. This way the U bracket is tightly attached to servo #2 center axis.

Another U bracket is mounted using four M3 bolts and nuts.

Notice that another bearing is used oposite to the servo axis, as described before.

The gripper is then connected to servo #5 axis. On it's top, servo #6 is connected using some bolts, nuts and a metal horn. The gripper has some gears, which will turn the rotation of the servo into a linear movement of the gripper.

For this project I decided to use a Nintendo Nunchuk controller for a number of reasons:

Unfortunatelly Nunchuk joysticks have a complicated connector, hard to interface with other electronics. In order to connect it to the Arduino, I had to cut its cable and expose it's wires. This way, it won't work with a Nintendo Wii anymore... :/

I soldered the wires to a male jumper , for an easier connection to the Arduino board. For that, I used a soldering iron, and some shrinking tube, as its shown on the pictures.

I was informed later that there's a Nunchuk adapter that makes the connection to a breadboad easier (link / link). It's a good option if you want to same some time on soldering and doesn't want to destroy the original connector.

Step 10: Wiring Up the Circuits

Once the structure is assembled, and Nunchuk connectors are finished, you'll be ready to wire up the circuits. I used the controll board shield that came along with my robotic arm kit. It makes the connection of the components easier, since it already comes with specific connectors for the servomotors, power supply, etc.

Connect the components as follows:

If you're using an Arduino Uno, Nunchuk' SCL and SDA pins shall be connected to different Arduino pins, as follows:

If you're not using the control shield, you should use the following pin configuration:

You'll also need to connect an external 12V power supply. I suggest one with more than 2A output. The servos consume a lot of power, and if the power supply is not powerfull enough, the servos will vibrate and get really hot. They will also lose their strenght.

Don't connect the power source until you've uploaded the Arduino code (shown in later steps). There's a power button on the shield. Keep it on the off position.

Plug an USB cable on the Arduino and proceed to the next step.

Now that the hardware is ready, it's time to work on the Arduino code.

Download it for free, install it on your computer and launch it.

For this project I used Robert Eisele's amazing Nunchuk Arduino library! You can find more about it on his website:

Navigate to Sketch-> Include Library -> Manage Libraries... on your Arduino IDE for adding the library.

How does the library works?

Nunchuk library comes with a set of functions for reading controller's sensors:

The angles are returned in radians. I converted those values to degrees in my Arduino code.

Plug the USB cable on your computer's USB port and upload the code. Uploading the code takes some time. You can use that time to give a 'like' and 'share' this tutorial while you wait! :D

After the upload was complete, unplug the USB cable, connect the power supply and turn on the power button. The code will start running imediatly.

Warning: when the code starts running, the robotic arm will move really fast to it's initial position. Be careful not to get hurt or damage nearby equipment during startup!

You'll possibly have to replace the starting angle of each servomotor depending on how your servos where mounted.

Before the setup, the code imports the libraries used on the sketch (nunchuk.h, wire.h and servo.h).

Pins to be used are defined, and global variables are declared. The angle# integer variables store the initial position for each servo. If you want your robot to start at a different position, change the values on those variables.

servo#_speed variables define the speed of the movement of each servo. If you want a specific servo to move faster, increase its value. angle#min and angle#max variables are used to limit the maximun and minimun angle for each servo. You can set those variables in order to avoid colisions between consecutive joints of the robot.

During the setup, each servo is attached to an especific pin, and its position is started.

The main loop is repeated over and over. Nunchuk status is read at each cycle. Depending on the readings, different commands are performed.

Joystick X will be used to move the servo #1.

The following block of code was used. First it checks if the value of the joystick is large enough. This way, noise and small variations are disregarded. If the value meet the requirements, the angle of the servo will be increased/decreased at a given speed.

A similar block is used for joystick y. It's used for changing the angle of servo #3. Servo #2 is kept fixed in this code.

When only C button is pressed, the code reads roll angle and use it as a set point. servo #5 is rotated until it reaches the set point. It's speed is proportional to the error between actual and desired position. A similar code is used for servo #4, which tracks Nunchuk's pitch angle.

The gripper is closed whenever both C and Z buttons are pressed. When any of those buttons is released, the robot will open its gripper.

There's a block of code by the end of the sketch. It will display on the Serial Monitor the actual angle of each servomotor. It might be helpfull for choosing the starting angle of each motor.

Now that everything is ready, power up the robot and have fun!

You can modify the code for having different movements based on a combination of the buttons and angles of the joystick.

18 projects • 369 followers
Electrical and Mechanical engineer, master in automation and control. specialist in industrial instrumentation. Mad scientist and inventor.
ContactContact
Thanks to infusion.