Send text from one LaunchPad to another using the Grove IR emitter and receiver!

Send text from one LaunchPad to another using the Grove IR emitter and receiver! 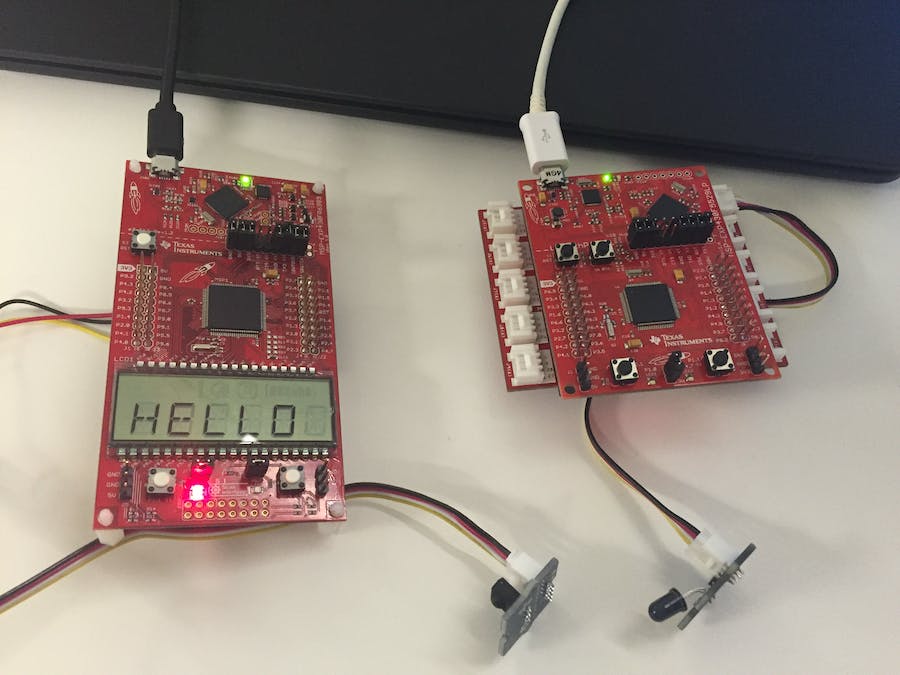 This project enables communication from one MSP430F5529 Launchpad to another MSP430FR6989 Launchpad and displays the text received on the built in LCD screen.  The transmission of text in this case is just used for an example as it is simply transmitting ASCII values, this project could also be used to transmit sensor data, remote codes, or any other information.

I developed a custom IR Library in order to get the grove modules to function properly.  The library is based on the included IR library in energia as well as the provided arduino library from SeedStudio with the grove module.  Because emitting an IR signal takes a PWM pulse of a specific frequency for a specific duration, the library unfortunately had to be hard coded to a pin.  In this case, it is tied to pin 40 of the MSP430F5529.  The receiver, however, can be put on any pin so long as it has GPIO capabilities.  This can be declared when initializing the IRSendRev object.

Finally, as the IR information comes in, it is stored in a char buffer which is then printed to the built in LCD screen using the LCD_Launchpad library which is built into energia.

8 projects • 18 followers
I am an applications engineer with Texas Instruments working with the Launchpad by trade, and a maker by passion!
ContactContact