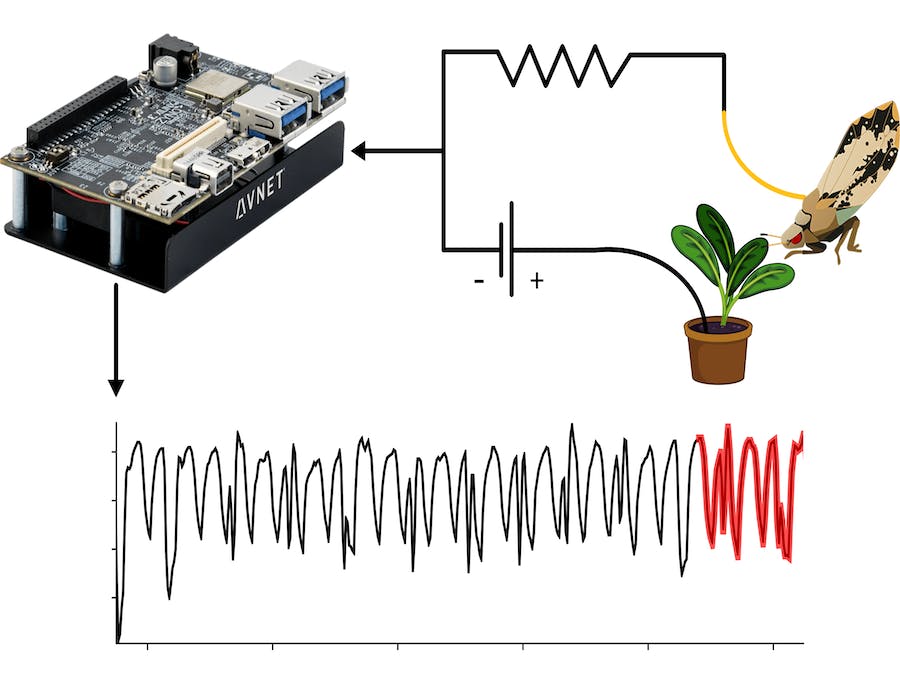 With the proliferation of low-cost sensors and the Internet-of-Things (IoT), we are now living in a world in which far more data is being collected than can reasonably be processed and stored. Much of this data takes the form of time series: an ordered sequence of data points captured at a sensor-specific sampling frequency. Given the most recent window of sampled data points, we wish to ask the following simple and straightforward question

Figure 1, below, gives two examples of how this question may generalize to important scientific domains. On top, an entomologist is trying to understand insect behavior based on data obtained from an Electrical Penetration Graph (EPG); on the bottom, a seismologist wants to know if similar readings have been archived in the historical record. Many other important applications of similar time series analysis exist, and computational methods designed for time series analysis in one domain readily transfer to others.

This question is relatively straightforward to answer if the entire time series can be stored and archived; however, as time series grow large, searching the history becomes intractable, even at the cloud computing scale. In contrast, we propose to answer this question probabilistically using machine learning: our system trains a 2-dimensional convolutional neural network (2D-CNN) and deploys it on a Xilinx Ultra96-V2 FPGA board. The 2D-CNN predicts the similarity of a recent sampling of data points to the time series that were used to train the model.

Figure 1: Two time series subsequences (in red) that need to be quickly processed to answer relevant questions posed by domain scientists. Top: An example of data from an insect EPG (Electrical Penetration Graph) apparatus. Bottom: An example of a trace from a seismograph.

The entire time series history can be searched using a data structure called the Matrix Profile (MP) [1], as shown in Figure 2. Without going into too much detail, the MP is relatively expensive to compute [2]; however, given the MP, many classically challenging time series data mining tasks such as anomaly detection, classification, and motif discovery become trivial. Ideally, we would like to perform these tasks as close to the sensor as possible [3], thereby eliminating the need to transmit and store data in the cloud for post-hoc analysis.

Our solution uses machine learning to predict the value of a Learned Approximate Matrix Profile (LAMP) [4], as shown in Figure 3, rather than computing the MP directly. The runtime of LAMP is orders of magnitude faster than computing and updating the MP as each datapoint arrives. This project reports an implementation of LAMP on a Ultra96-V2 FPGA board. We show that our implementation maintains an accuracy of over 90% with comparable inference execution time to similar CPU implementation.

Figure 2: An example of a 500 data point time series and its MP. In this example, low MP values represent the starting points of similar subsequences. The Exclusion Zone prevents matches between a subsequence and itself and/or other close-by subsequences.
Figure 3: LAMP: Approximating the MP using a learned, representative dataset.

The 2D-CNN neural network model at the core of LAMP is trained offline; it is implemented on a Xilinx Ultra96-V2 FPGA for inference. We implemented the 2D-CNN using the Xilinx Vitis AI compiler, and synthesized it onto the programmable Xilinx Deep Learning Processing Unit (DPU) overlay for acceleration. The DPU, shown in Figure 4, supports common CNN layers such as convolution, deconvolution, max pooling, ReLU, and others. The DPU fetches instructions generated by the Vitis AI compiler from off-chip memory; on-chip memory buffers input, intermediate, and output data, while trying to re-use data as much as possible to minimize data transfer latencies. The processing element (PE) at the heart of the DPU computing engine consists of multipliers, adders, and accumulators.

All the weights and biases in our trained 2D-CNN model are implemented using 8-bit fixed point arithmetic to increase the efficiency of the design. We have further modified the model to make it suitable for Xilinx DPU. In the original 2D-CNN model [4], shown in Figure 5.left, a Convolutional layer is followed by ReLU and then Batch Normalization. This organization leads to sub-optimal performance, because the Vitis AI compiler cannot merge the Convolutional and Batch Normalization layers, because they are separated by an activation function; this leads to both poor performance and poor prediction. To overcome this difficulty, we switched the order to the ReLU and Batch Normalization layers in the 2D-CNN, as shown in Figure 5.right.

Figure 6 depicts the complete 2D-CNN model that we deployed on the Xilinx Ultra96-V2 board; all of the Batch Normalization layers are merged with the Convolutional layers. Unfortunately, the DPU does not support all the layers of the model: the Sigmoid and Global Average Pooling (named “Mean” in Figure 6) layers are offloaded to the ARM CPU.

Figure 5: Left: the original order of 2D-CNN layers results in a standalone Batch Normalization layer and inaccurate prediction results when compiled with Vitis AI. Right: correct order of 2D-CNN layers. Note: while the CNN processes a 1-dimensional time series, it still applies 2D convolutions to the data; hence the Conv2D units are correct.
Figure 6: 2D-CNN for LAMP deployed on the FPGA. Note that the BatchNorm operation from Figure 5 is merged into the Conv2D operations in this figure.

We showcase the generalizability of our framework by evaluating the implemented design with three different datasets from three domains: seismology, entomology, and poultry farming:

We split each dataset into separate data for training and inference. First, we train a LAMP model for inference using a GP; second, we import the model on the FPGA using the DPU overlay; last, we apply the test data to predict the MP values for the time series. We assess accuracy using the same methodology outlined in Ref. [4]. Table 1 reports the mean absolute error between the model’s output and the corresponding MP value, which we compute using the SCAMP algorithm [2] on a GPU for comparison. Table 1 illustrates the accuracy of each dataset as well as the size of training and test data.

The runtime of LAMP inference does not depend on the size of the representative dataset used for training; thus, the execution time is the same for a batch of input time series data across all datasets. The time to compute inference for a single batch of size 128 takes about 729ms on the Ultra96-V2 board with the PL frequency set to 100MHz; in comparison, the execution time of the same batch size on a system with an Intel Corei7-8570K CPU takes around 428ms. We don't consider the time overhead for reconfiguring the FPGA with the second DPU kernel (around 150ms). The reason is that this step can be done only once by first storing the intermediate results (first kernel's output) and later feeding them to the second kernel.

We used the following hardware and software components in this project.

Hardware: As per the rules of the Design Contest, we implemented LAMP on an Avnet Ultra96-V2 FPGA development board. We trained the LAMP models using a Thinkmate VSX R5 340V9 server, which features two Nvidia Tesla P100 GPUs; we only used one of the GPUs to train the model. We used a Micro SD card to run the pre-compiled PYNQ image on board and also load the datasets for predictions.

Software: We used two pieces of academic software to compute MPs and LAMP models as necessary. We used the SCAlable Matrix Profile (SCAMP) algorithm to compute MPs [2], which served as ground truth for LAMP model training. We then used the LAMP software [4] to train the 2D-CNN models. We compiled the LAMP models using Xilinx Vitis AI, and we configured the FPGA using the Pynq DPU Overlay. We program the SD Card with Xilinx PYNG V2.5 image to run the python host application on the ARM processor.

In this section we show how to deploy LAMP on Xilinx Deep Processing Unit (DPU) and implement it on the FPGA given a pre-trained model on GPU. The instructions require Vitis-AI installed on the system.

The Vitis-AI flow requires a frozen model for quantization and optimization steps. A frozen model contains information about the graph and checkpoint variables, saving these hyperparameters as constants within the graph structure. This allows fusing some of the layers together for deployment on DPU. We can generate a binary protobuf (.pb) file by running the freeze_graph.py script

where input_model is the pre-trained LAMP model.

frozen_graph.pb is the frozen model generated in the previous step, input_func is the python file that generates the input data for quantizer (since there is no backpropagation step here, the unlabeled dataset is sufficient), and calib_iter is the number of iterations for calibrating the activations, we noticed that values larger than 128 do not increase the quantizer accuracy by a large degree.

We will test the accuracy of the generated quantized model before deploying it to the FPGA.

Vitis-AI Docker image does not support Ultra96-v2 board, we need to generate the DPU configuration file (Ultra96.dcf) required in the compile step by first downloading the DPU Hardware Handoff file dpu.hwh and then running the following command

dlet is a host tool that extracts the DPU information from the input file and generates the configuration file.

Next, we will compile the model for the target hardware

arch.json is located in the files directory on the github repository. Since, Sigmoid and Global Average Pool layers are not supported by DPU, the command generates four kernels, two of which will be deployed to the FPGA and the other two will be implemented on the host ARM CPU. Xilinx DNNK API has an issue with loading the static libraries that start with the same name, in order to fix this issue, we run the same command one more time setting the output model name to dense_lamp, later, we will use lamp_0.elf and dense_lamp_2.elf when loading the kernels.

First we need to install dpu-pynq on the Ultra96 board. Open a terminal and run

The build process might take up to an hour. After that, we can run the models on board by executing lamp_dpu.ipynb. The notebook takes a time series dataset as input and writes the predictions in predict.txt file.

The rationale for this project is that the MP is not compatible with streaming data where sampling rates impose real-time constraints on computation. LAMP solved this problem using machine learning, with initial deployment results reported using a Raspberry Pi [4]. The reason to switch to an FPGA is to improve throughput and reduce energy consumption, while keeping LAMP computation as close to the sensor as possible. This could be beneficial for domains such as seismology, where real-time event prediction can inform hazard response strategies and enhance early warning systems presently deployed.