This Alexa skill challenges the user to solve a quick puzzle of finding the correct color in as few turns as possible.

This Alexa skill challenges the user to solve a quick puzzle of finding the correct color in as few turns as possible. 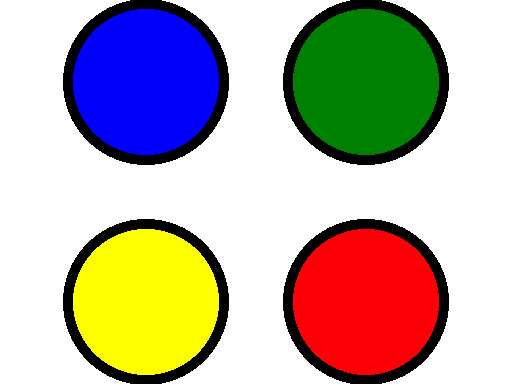 What does it do?

If the player uses Echo buttons then each button corresponds to a slot in the sequence. Pressing a button changes the color for that slot to the next color, and when the player has finished setting their desired sequence they can say "Try this code" to find out how well the guess matches the answer. Alternatively, if the player is using voice control they simply state the sequence of colors (voice control works even if the player indicated that they were using Echo buttons previously and will change the color of the Echo buttons to match the current guess). After the game reports the number of correctly and incorrectly matched colors, the player is then asked to guess again if they did not find the answer. The game continues until the player determines the solution.

Ideally the player would be able to keep a running mental tally of their past guesses and the narrowing pool of possible solutions, but with a large number of slots and colors this can be a bit difficult. In both Mastermind and Bulls and Cows the record of past tries is available visually, but that is obviously out of the question for someone using an Alexa based device without a display. As an alternative, this skill is able to recount the complete record of past guesses after the player asks "What have I guessed before?" or the record for a single turn if the player asks "What did I guess on turn #?", where # is the turn in question (asking for a particular turn will also set the Echo buttons to the previous color sequence).

Once the player has the solution the game compares the number of guesses it took them to their previously recorded best score if they played using that combination of the numbers of slots and colors, updating the best score as necessary. The player can then choose if they want to play with the same settings or choose a different number of slots or colors for their next game.

What makes it work?

This skill is programmed in Javascript with NodeJS and runs on AWS Lambda. Data storage between sessions (for keeping track of the record lowest numbers of guesses) is handled with AWS DynamoDB.

Why did you make it?

In my childhood we had an animal themed Mastermind board game (one color was represented by plastic lions, another color was hippos, etc) that I played with my siblings.

While games of this type are simple and rather shallow (your standard 4-slot 6-color game has been mathematically proven to be solvable in a maximum of five guesses), they provide a fun way for kids to practice their logical deduction skills.