A simple way to leave a message, wherever you are! Demonstrates simple two-way communication between Alexa and the Pi.

A simple way to leave a message, wherever you are! Demonstrates simple two-way communication between Alexa and the Pi. 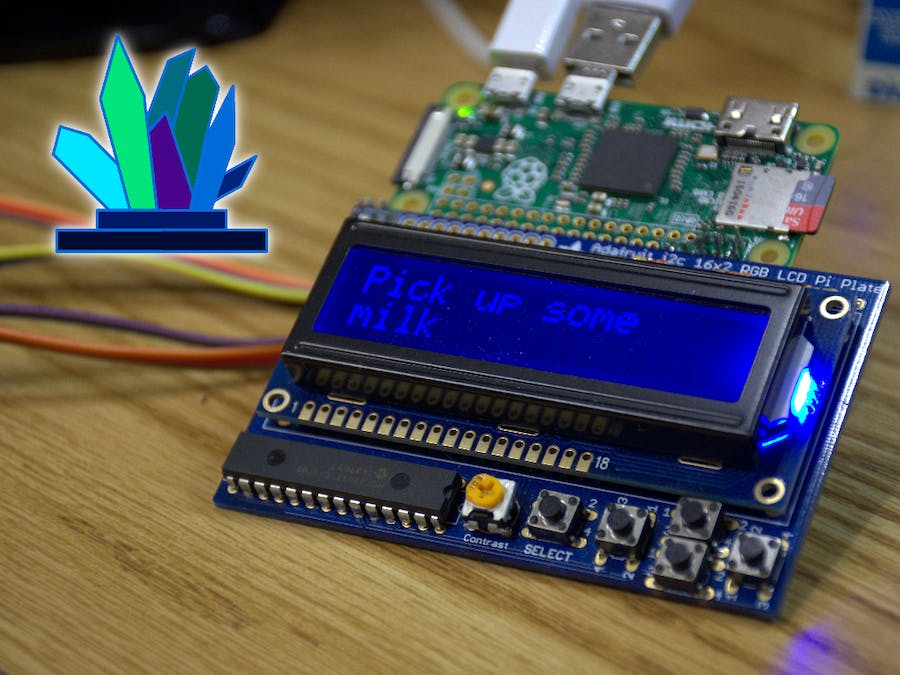 Note: This skill is published in the Alexa Skill catalog. Try navigating the voice UI on the Echo without any setup here!

This project not only shows you how to create a wireless notepad, but also details my experience getting communication working between Alexa and a Raspberry Pi from a first-time user's perspective. I'll detail the cool things and pitfalls I found when making this application, and show you how to get data both to and from the Raspberry Pi using a custom skill so you can get your Pi to speak and act to your heart's content!

Since the invention of the sticky note, we've always been leaving memos; for others and ourselves alike. When I was pondering what to create for this challenge (and thus my first dive into AWS IoT, Lambda, and Node.js), I thought, why waste the paper when I have CPU resources idly wasting away on my Pi? Here's a few more reasons I chose to make this as my first project:

What can CrystalPlate do? Well, it currently offers the following functionalities:

Again, Chris Synan has a great guide on setting this up, so I'll just note a few thoughts that went through my head (as a new AWS IOT user) when following his guide:

Com-links are (almost) ready to go!

Connecting the Pi to AWS IoT

Note: This could cost you (a small amount of) money! The AWS free tier includes the ability to deliver 250,000 messages a month for free for 12 months, but it will cost $5 per million messages after that. We're not getting anywhere near that, but you can check out the pricing info here.

First, we'll need to set up our Pi. If you don't have a Raspberry Pi Zero, don't worry! The code we'll be running should work on any Pi platform. I started with the Raspbian Lite image on the Raspberry Pi website, and we'll work from there.

Since AWS IoT can use MQTT to actually communicate between devices, we'll need to install a client we can use within our own Python script. First, make sure you have pip installed:

and then install the Paho MQTT client:

While we're installing things, we'll also need the Adafruit Character LCD Library for our Pi, installation instructions for which can be found here. Essentially, the commands boil down as follows:

Shweta Nerake has a good starting base for hooking up up the Pi to AWS IoT with her file, mqtt-iot-subscriber. This script provides a skeleton for calling whatever code you write when a new message comes in, or when the Pi gets connected/disconnected. I've built the rest of my code upon this skeleton, and have turned it into CrystalPlate.py. For this specific project, all you need to do is download the file and change the following lines:

570 problems but swapping files ain't one

Here's an explanation of what each variable is:

So, with this setup, you'll want to create a folder on your Pi called certs in the same directory as the Python script (CrystalPlate.py), and place those files inside of that folder.

Now, when you run the script, your Pi should be ready to talk!

Connecting the LCD to the Pi

This part's pretty simple - you can find assembly instructions for the Pi Plate by Adafruit here! Make sure you've installed male pins on your Pi Zero for the plate to fit on correctly.

Amazon likes to integrate with its own tools, so it's no wonder that trying to create an Alexa app will push us towards AWS Lambda for hosting and running our code (setting up code elsewhere is possible, but harder). AWS Lambda is basically a tool to create a piece of code that runs in response to a request - basically, the Alexa Skill we'll create in a bit will take in a user's voice input, convert it to a standardized request format, and then send it over to our Lambda function, which will be responsible for all of the processing and sending a text response back to Alexa, which it will then, in turn, turn back into voice for the user to hear.

Note: Since AWS Lambda uses some amount of computing resources on Amazon's end, this service isn't totally free. However, Amazon is generous enough to host 1 million requests for free each month, which is more than plenty for our purposes. Find out more about the pricing here.

First, let's prepare our project files. Start with a nice, fresh folder we can start throwing things into:

Oops, I'm on my Windows box. How un-maker-like! Don't worry, this will work on all platforms.

Next, we'll want to install the Node.js module aws-iot-device-sdk . If you have npm installed (and on Linux, I'd recommend just going ahead an installing it, via apt-get , yum , or otherwise), you can just run:

For the lazy out there, i've also included a zip file here that contains the same files npm would have created. Make sure to unzip it!

Now our folder should contain one folder inside of it, called node_modules. Next, copy over the project files package.json, index.js, rootCA.pem, and your certificate files over (if you created and attached two sets of certificates to your Thing in AWS IoT, use the other one here). Your folder should now look something like this:

Of course, your filenames for your private key and such should (hopefully!) differ from mine

Anyone else playing Pokemon Go?

Make sure keyPath and certPath are the names of your certificate and key in your folder! If you downloaded my rootCA.pem, you won't need to change that; clientId just needs to be different from the client ID we set up on the Pi so MQTT doesn't get confused, and region should be us-east-1. You'll also want to comment out some code that's there for security for now, we can add it again later:

Once you've done that, our files just need to be zipped up to send to Amazon - select all of your files (NOT the parent folder!) and zip 'em up:

On Linux, with the zip command installed (which you can get via apt-get, yum, etc.), the command would be:

Now we're ready to ship this off to Amazon Lambda!

Amazon made a great tutorial on how to do this, which can be found here. Here's what you'll need to keep in mind when moving through it:

Before we start, I think it's a good idea to conceptualize what an Alexa "Skill" even is. Going into it, I thought that the Alexa Skill would be handling all of the logic, processing, and communication with the Pi, but in reality, it performs only one deceptively simple task: Turning the human voice into triggers that get sent to an application in the background for processing.

Again, Amazon has a great tutorial on setting this up here - we're looking at step 2. Here's my notes on the process:

Type should match the name behind the colon in the txt file; values follow

And we're done here - All we need to do is start the Python script and start receiving messages!

You can get the script running simply by typing this in the folder with CrystalPlate.py:

You should see "Connected! Ready for input" on the display, and from there, you're set to use the Echo connected to your account or EchoSim to try it out - have fun!

So everything's working; wouldn't it be nice if this python script started itself when the Pi did? Well, it's possible (and easy)! RaspberryPi-Spy has a great tutorial on this - just change around the name of the python script and name of the service to match.

Remember those lines we commented out from index.js earlier? We can add an extra layer of security on our AWS Lambda function by copying the application ID from the Alexa Skill and pasting it back into the index.js script we uploaded to Lambda. Just put your ID there, and uncomment those lines so that other people's skills can't talk to your Lambda function! 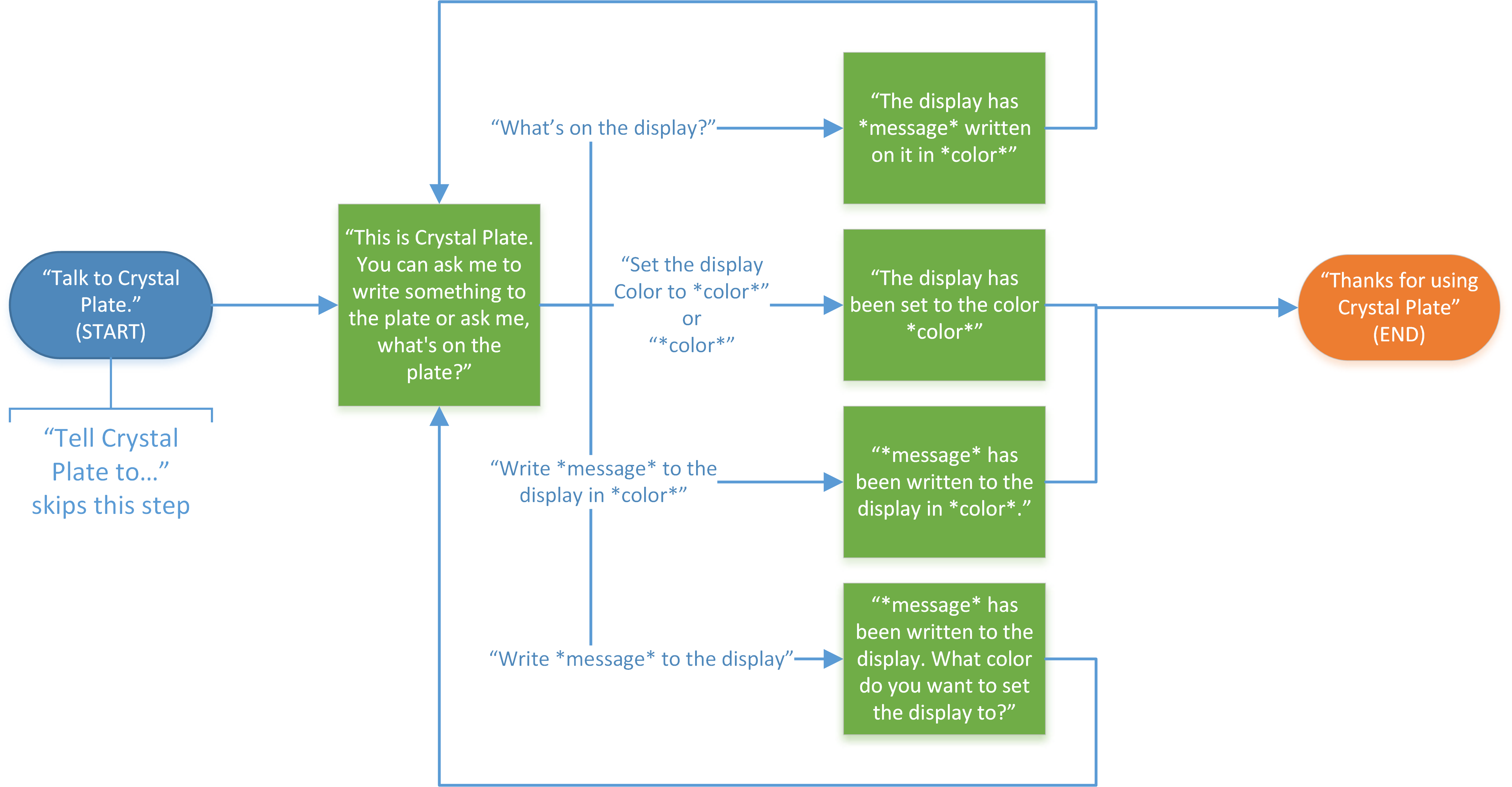 1 project • 1 follower
I love to tinker. And hot glue. The two go pretty well together, don't they?
ContactContact