It started with complaints on constant occupancy of toilets. Later there were some suggestions about developing a smartphone app.

IoT Toilet And How We Digitize it in Adastra

IoT Toilet And How We Digitize it in Adastra

It started with complaints on constant occupancy of toilets. Later there were some suggestions about developing a smartphone app. 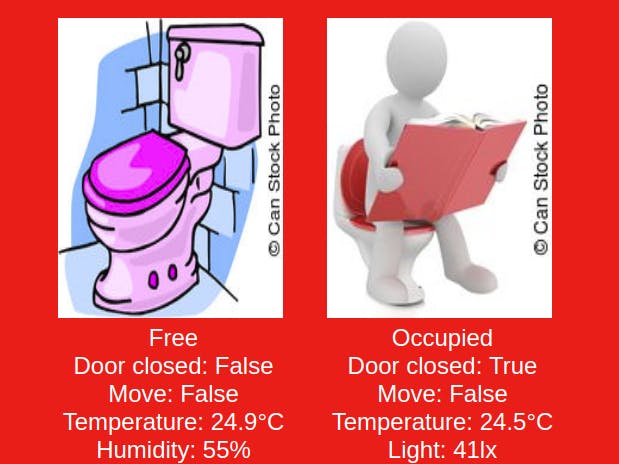 It started with complaints on constant occupancy of toilets. Later there were some suggestions about developing a smartphone app. But everyone who knows Adastra people will know, that you have to be careful with these hints.

Adastra is growing every month, the offices are not growing so much and until we move somewhere else, we have to wait for a while. Now imagine that you are going to check the toilet occupancy for the third time, you‘re running almost with crossed legs – and again - you have no luck – all toilets are occupied.

It's just a small issue you say but this small thing is making a lot of people nervous. And months later this issue made it up to the quarterly meeting.

It all has started with this question: What about the toilet app to inform us about toilet occupancy?

Director Pavel Kysela put this idea to the hold, but it was already late. Group of the people in IoT section of Adastra are very creative. We deliver smart solutions to our customers which saves time and money. So this is a great opportunity to create something, that makes life easier for everyone.

So Petr Matějíček and Martin Záruba started their own underground „summer jam“ coding.

This is the result:

Toi App will save you unnecessary journey to the toilet.

Like with all our IoT projects: Sensor — Field gateway — Azure — Database — Presentation

Information from the sensor on the toilet is sent wirelessly to the server room. There is the data send by small clever app routed to the cloud, so we could say we have the „Internet of Things“. On the special website, we show the occupancy of toilets.

Application displays „occupied“ when two conditions are met together:

Movement in the cabin is detected with a Motion Sensor which is built with BigClown IoT kit with a firmware you can find on my GitHub.

Field gateway is using Intel NUC – just because we have these computers in our server room for other test applications.

It‘s worth to mention the clever solution of the sensor. Closed doors are detected with a contact on the door frame with a piece of tin foil. For fixation, we used a piece of wood, precise hit with an axe, M4 threaded rod, and adhesive tape. We did not bother with the enclosure of our sensor – why would we when visitors of this place also take off their pants.

The combination of a lot of creativity and bit of brute force worked perfectly.

Hardware is created with the path of the least resistance. However, this does not mean that Adastra did not play with the functionality enough. Besides the occupancy of the toilet can Matěj‘s and Martin‘s solution also:

Guys also wanted to install a sensor for measuring the quality of the air, but in the end, this sensor wasn‘t used. We all also felt a big relief, that the final solution does not contain a camera.

Because Adastra sees data behind everything, they are saved to the database. Meanwhile, Matěj was building sensor and was prototyping ToI app, Martin was playing with the data.

The data are first saved to the database. After that, these values are used for further calculation for example count of toilet visitors or duration of occupancy. At the end from all of this, the dashboards are generated.

We wouldn‘t be from Adastra if we wouldn‘t add a report.

Just in two weeks we know, that there are tough guys who with that small supply of air can live for 45 minutes. We hope that based on the future data reports we would plan for example amount of snacks.

Martin Hubáček
Thanks to Petr and Martin.