Readers can learn how to collect and display the environmental data through Arty S7, 4 Pmods and a touchscreen display.

Readers can learn how to collect and display the environmental data through Arty S7, 4 Pmods and a touchscreen display. 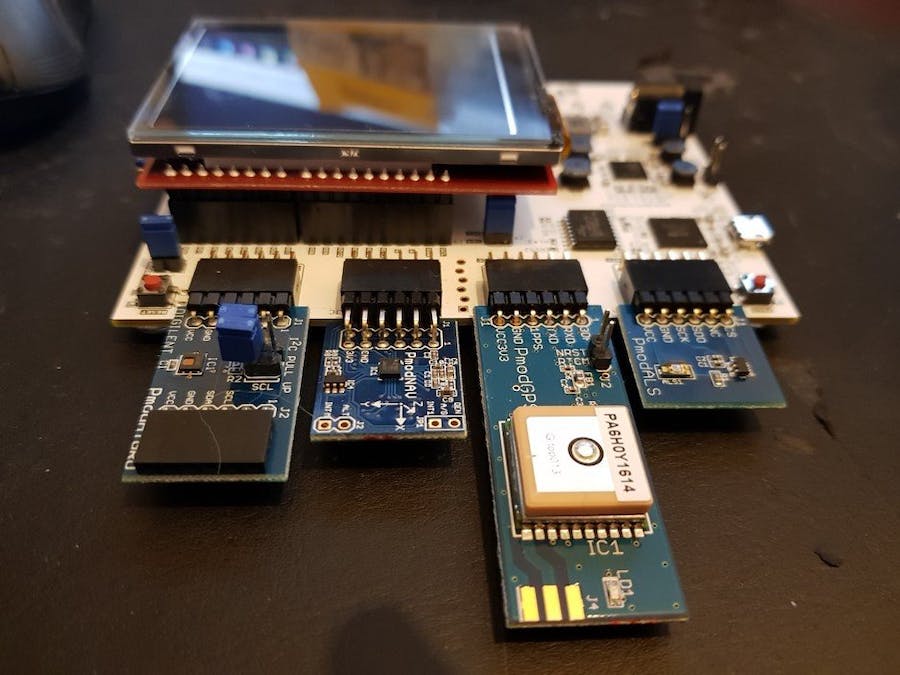 The Digilent Arty S7 is a variant of the popular Digilent Arty series of boards, designed around the Xilinx Spartan 7 family of devices. When it comes to interfacing the Arty S7 provides a range of options from 4 Pmod ports to Arduino Shield connectors.

In this tutorial, we use Arty S7, four Pmod’s (see bleow list) and a multi-touch display shield (MTDS) to collect, process and display environmental data. To do this we will need the following

To create this example the first thing we need to do is to create a hardware platform using Xilinx Vivado. For this application, we instantiate a MicroBlaze processor within the Spartan 7 FPGA device. We then use Xilinx SDK to create the software to drive the multi-touch display shield (MTDS) and Pmods.

Firstly, we should install the Arty S7 board files which can be downloaded at https://github.com/Digilent/vivado-boards/archive/master.zip. These files define for Arty S7 interfaces and memory configurations in Xilinx Vivado environment. Once the folder is extracted, they should be copied into your Vivado installation underthe directory <vivado>/<vivado version>/data/boards/board_files as shown below (You can also refer to the tutorial provided by Digilent: https://reference.digilentinc.com/vivado/getting_started/start )

Copying the Arty S7 board files in the Vivado installation

Create drivers for Pmods and MTDS

We can create drivers for Pmods and the MTDS by leveraging the existing Digilent Vivado library available from the Digilent GitHub. This library contains both the Xilinx Vivado and Xilinx SDK drivers for most Pmods. Once you are at the Digilent GitHub, you can either clone the directory locally or download a zip and extract it locally.

Next, we open Xilinx Vivado and create a new project targeting the Arty S7

Once the project has been created, the next step is to map the Digilent Vivado Library as a repository such that we can add the Pmod and MTDS IP Cores into the design. This can be done by the project settings tab.

Adding board elements to the block diagram

The next step is to add the MicroBlaze. This can be done by selecting the add IP option and searching for MicroBlaze. Once it is added to the design we can let Xilinx Vivado connect most of the system by using the run connection automation option. If never create MicroBlaze systems, this video provides a step by step example.

When you instantiate the MicroBlaze IP core, you need to enable the following elements before you run the connection automation

After we create the MicroBlaze system, we add required Pmods, MTDS and other IP cores (see below list) from Digilent Vivado library. These IP Cores require connecting to the correct output port (Pmod or Shield connector) and the AXI interconnect so that MicroBlaze system to control and interact with them.

Once all required IP blocks have been added, we can associate its outputs with a Pmod or the shield interface by double clicking on the IP block and selecting the interface from the drop-down menu.

For MTDS, we select the SPI interface

Configuring the MTDS to connect to the Shield SPI

We first need to prepare a MicroSD Card. This SD Card is inserted into the MTDS and holds a number bitmap images we might wish to use. The MTDS driver provides an images directory with several ready prepared bitmaps which be found at <install location>\ip\Pmods\PmodMTDS_v1_0\drivers\PmodMTDS_v1_0\examples\Resources

Copy these files to the SD Card, including any additional ones required for your application and insert the SD Card in to the MTDS.

There are three modes for the system. Modes will be changed via touch screen buttons on the MTDS

Here is the outline for the overall software architecture

This ensures the system is efficient and reduce the possibility for missing any "touch screen event".

Now, we can make use of the software drivers provided by Digilent Vivado library. To interact with the MTDS, we can use the MYDISP API which provides several functions such as

This document will tell you everything you need to get the MTDS up and running. Similarly, you can find application examples for each of the Pmods used under the software driver directory.

Using these examples and the outline architecture above we can quickly and easily create the software application.

You can see how the system in the video.

The complete design can be downloaded from Adam's GitHub: https://github.com/ATaylorCEngFIET/Arty_s7_example