A Smart Camera that can switch AI detection models based on distance measured by a time-of-flight sensor.

A Smart Camera that can switch AI detection models based on distance measured by a time-of-flight sensor. 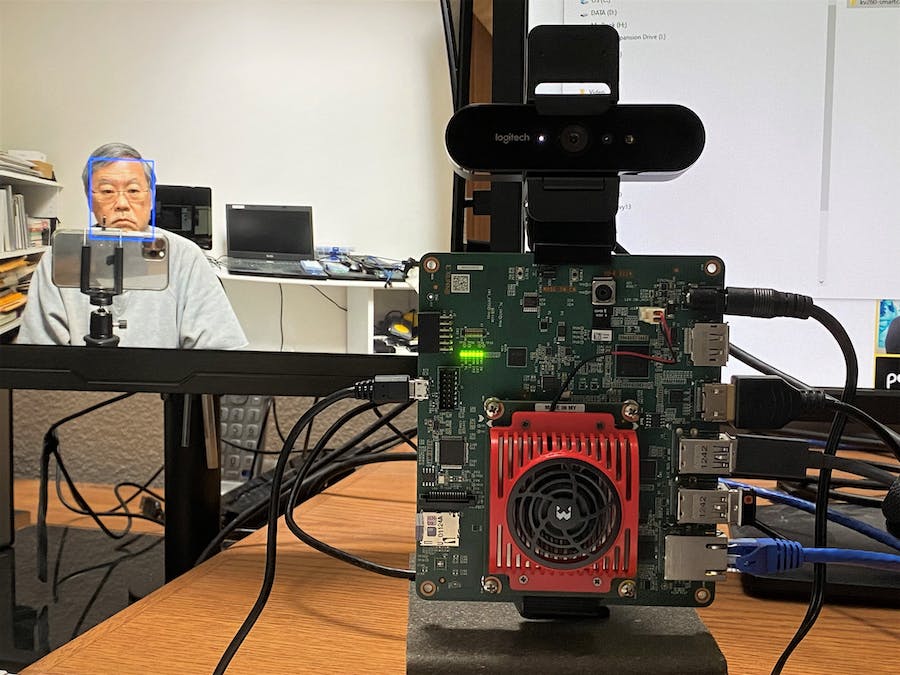 I struggled from the start to finish of this project trying to determine which design flow would allow me to best accomplish my objectives. A lot of that uncertainty is reflected in my design. I had a choice of 3 flows - PetaLinux, Ubuntu, or Ubuntu/PYNQ. All flows used Vitis-AI and the DPU.

I decided that I would come up with a minimalist mechanical design - a simple mount for the KV260 board that I could extend easily to add accessories necessary to implement the smart camera.

There are 3 embedded Linux variants that can be used the Kria. There are advantages and disadvantages with each OS and of course each requires specific versions of the Xilinx tools. Here's a quick summary of the different things I tried on each OS.

PetaLinux
Currently, there are 3 different versions of the Xilinx tools used with the Kria - 2020.2, 2021.1, and 2021.2, although 2021.2 is somewhat unusable because there isn't a released BSP for the Starter Kit and the SmartVision apps aren't available yet. Mario Bergeron did a great multi-part tutorial on customizing the VVAS Smart Model App in 2021.1, so I tried that - KV260 VVAS SMS 2021.1.

The image below shows the SMS selection screen.

Ubuntu
The Ubuntu image released for the Kria is 20.04.03 LTS. Currently supported with Xilinx 2020.2.2 toolset (Vivado/Vitis/PetaLinux) and Vitis AI 1.3.

The console output that shows the detected keyword. Because this model was not trained with my voice and hardware - it has about a 25% error rate.

Ubuntu/PYNQ
Kria-PYNQ runs PYNQ v2.7 on the same Ubuntu OS used above. It adds the ability to run Jupyter Notebooks which allows for quick prototyping using iPython. It provides a base overlay that provides GPIO interfacing through MicroBlaze IOPs that could be used to connect the LIDAR07 sensor. There is also a DPU-PYNQ overlay that supports Vitis AI 1.4 and a PYNQ_Composable_Pipeline overlay that allows building custom pipelines of accelerated elements.

The base overlay includes the MiPi CSI interface for the PCam 5C, so I tried that out. I don't think the other pre-built platforms that are available have that included. I'd like to try the interface with a Raspberry Pi camera, but I'm not sure how to develop a driver for it. Below is a frame capture in a notebook.

I wanted to use the smart camera untethered from a host computer, so I decided to try adding a USB WiFi dongle. The specific unit that I used is a USB3 802.11 ac dual band (2.4/5.8GHz) adapter with an integrated antenna. The simplest way to test this out with the Kria is with an Ubuntu configuration (for PetaLinux, I need to figure out how to add the device driver).

This adapter is plug and play with Windows, but for Linux it requires that a device driver be installed. Luckily this unit is using a Realtek 8812BU chipset and has an arm64 driver available for it - https://github.com/morrownr/88x2bu-20210702.

For this test I am using the Ubuntu 20.04 image for the Kria.

First step is to identify the adapter/chipset. To do this, attach the WiFi dongle and list the USB devices using lsusb.

The adapter is Device 005, a Realtek 8812BU. Now the installation is straightforward, just need to download the driver repository and rub the install script.

Then the adapter ID needs to be determined using iwconfig

If successful you should see an ipaddr associated with the adapter

I want to be able to run the smart camera remotely using a remote desktop (GUI). I've used SSH as a remote console, but I'd like to be able to get a remote display. Ubuntu by default is using the Gnome3 desktop which uses the Vino VNC server.

The good news is that setting up VNC is easy, the bad news is that I could not figure out how to get it to display the applications video output over VNC. nlp_smartvision specifically will not run with the desktop open, but not sure about the Vitis AI examples.

I'm going to use a time-of-flight (TOF) sensor to measure the distance from the camera to an object. The sensor that I'm using can be configured to use either UART or I2C for communication. There are libraries available for this sensor for the Arduino IDE, but I haven't seen one that I could apply directly for use in Ubuntu or PetaLinux. I am going to first verify that this sensor works using an Arduino compatible implementation and then attempt to port it to the Kria. I believe the correct approach would be to add a MicroBlaze IOP block to the firmware to implement an I2C interface (not sure if I could interface easily to the PS side of the Kria). If the Arduino test works, I will then try the IOP I2C interface using PYNQ and if that works - try to create a driver for the LIDAR07.

LIDAR07 interfaced to Seeeduino Xiao
Verify that the sensor works using the Arduino IDE and library with I2C interface. I am using a Xiao SamD21 board. The Arduino code is included in Xiao_Lidar07_Expansion_Board.ino.

A quick test shows that the interface works. I put my thumb on the temperature sensor to get a change in readings. The Notebook code is included in grove_adc_temperature.ipynb.

I would like to have facial recognition capability and that will require being able to capture data to build my own person database. I've used Edge Impulse for doing object classification, so I'd like to be able to interface to their framework. There are a number of different methods of uploading data to Edge Impulse, but the simplest method that I've seen for the Kria is the Nodejs version of the data uploader on the Ubuntu desktop described in this tutorial by Whitney Knitter Kria KV260 with Edge Impulse.

The model could not be optimized so the inference times aren't that great and some of the confidence scores are low, so the model needs some work. The Edge Impulse development flow is great, but I need to figure out how to get it to better utilize the Kria accelerated IP.

There were so many possible development options and the possibility of damaging a working configuration that, in addition to making image backups, I also kept SD card copies of known working configurations since it takes more than a few minutes to rewrite a backup image. So far, the SanDisk Ultra cards have worked reliably for me. Just need to keep track of what is on each card - PetaLinux, Ubuntu, and Ubuntu/PYNQ variants.

After a lot of experimenting, I finally decided that I would use Ubuntu as the OS for my application. I think it provides me with the most flexibility for implementation (I really struggle with adding features/devices using PetaLinux recipes). And it also allows me to fall back on the PYNQ framework for prototyping.

Again, I found a nice tutorial by Tom Simpson to create and run a custom machine learning application - Easy Machine Learning on Ubuntu with the Xilinx Kria KV260. For this project I want to use custom person detection and face recognition models with a custom application using the Brio WebCam as the image source.

Next step is to create a custom application to implement the Smart Security Camera.

I've been struggling to get the LIDAR07 to work without using a library (having a bit of a problem understanding the "spec"). While I work that out, I'm going to use the detection bounding box width as a proxy for distance.

Here is a quick demo of switching between detection models based on distance.

This has been a fun challenge. Thanks to Xilinx and Hackster for the opportunity and the hardware.

Xilinx has developed a great product with the Kria SOM and Vitis AI. I've only scratched the surface of what can be achieved. I'll keep evolving this project with better customized models and hopefully add IP cameras later.

To solve my inability to understand the LIDAR interface spec, I am going to try using a logic analyzer to capture the transactions when using the library. I will probably have to customize the I2C writes and reads.