Fun (maybe terror) for the whole family! Enter a list of participants, then ask the Tickle Monster to name who gets tickled next!

The Tickle Monster! - An Alexa Game

The Tickle Monster! - An Alexa Game

Fun (maybe terror) for the whole family! Enter a list of participants, then ask the Tickle Monster to name who gets tickled next! 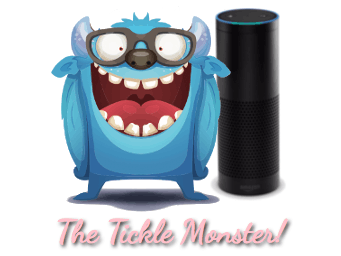 Many games currently available for Alexa are some form of quizzes (which gets old), or word/card/spacial games that feel clumsy in a voice interface, seeming to need (but lack) supporting visuals.

I wanted to create a different type of game designed from the ground up for voice interaction; something that uses wording variation to seem friendly and non-robotic... something that uses linguistic devices like dramatic pauses to add to the excitement and fun!

I also wanted the game to be so accessible, users immediately pick it up without the need for complicated instruction.

The result of my efforts is an entertaining, easy-to-understand game that uses voice interations to reach beyond the Echo and into living rooms so families (or very close acquaintances) can laugh and bond together.

The Skill is called... Tickle Monster!

As a first step, users activate the Alexa Skill, at which point they are automatically sent to a participant setup page.

After set up, gameplay is intentionally simple; just ask Tickle Monster "Who's Next?".

You can see the game in action in this brief demo:

The voice user interface (VUI) for Tickle Monster is intentionally straightforward, so much so that young children understand the basics and adults can easily grasp the nuance!

There are three main flows:

Note, however, that the actual voice responses vary somewhat from their representations above for brevity's sake.

The actual responses get a little interesting!

For starters, I'll explain the techniques used to make voice responses more engaging. The first technique Tickle Monster uses is randomization, not only in the name of the next tickle victim, but also in the phrase used to make the annoucement.

Specifically, instead of only dryly stating "Tickle Mom" or "Tickle Dad", we have an array of phrases Tickle Monster pulls from. This minimizes any robotic feeling in the interaction, which is helpful in maintaining user engagement in VUIs.

Additionally, Tickle Monster makes use of dramatic pauses through the use of "break" element in SSML. The actual templates look like this (where "break" tags are included and "{TickleVictim}" is a placeholder for the chosen name). These can easily change or expand per taste:

Putting it all together in an example, two back-to-back responses to the question "Ask Tickle Monster who's next", might read:

And since we've broken the ice with introduction of some code, it's time to show how the Tickle Monster Skill takes steps to keep things simple for not only users, but also developers!

Simplifying The Codebase Through Creative Use of OAuth

I mentioned previously how users go through a Tickle Monster participant setup process.

In practice, participant setup is handled through a process called account linking and it's worth going over the basics of how that process works.

Account linking uses the OAuth 2 protocol, specifically an "implicit grant" flow in Tickle Monster's case. OAuth implicit grant typically involves users verifying their identity via a login to your site, whence a user-associated "access token" is sent to Amazon for storage; after assoicating a user with an access token, Amazon will then send the token to your Alexa Skill with each request.

In my case (following the theme of simplicity), I didn't want to require credentials or account setup and I wanted to eliminate the complexity of a database for storing passwords & preferences. I therefore hacked the OAuth protocol to store participant choices as the access token.

It's nice, simple and slightly mischievous: just like the Tickle Monster!

Want to see how that looks in a real world demonstration? Stay tuned.

If your interest is piqued enough to set up a Tickle Monster-like Skill for yourself, you should know about the three tiers in play:

If interested, you can deploy everything and get tinkering in minutes. This impressively brief (if I do say so myself) video shows you how!

If you've just been intrigued enough to keep reading, you may be curious about the code, how Amazon's toolsets work, or about the specifics of how Tickle Monster uses OAuth to store user selections. This video provides more in-depth detail on the code, tools and trickery!

For reference and easy copy/pasting (if following the setup video), the intent schema configuration is:

...where the intents map to these sample utterances:

There you have it, the anatomy of "The Tickle Monster" Alexa Skill.

As you can see, fun, engaging voice-driven experiences can happen with only a couple pages of code and a little ingenuity!

I hope you and yours enjoy Tickle Monster as much as my family did!

1 project • 5 followers
With 14 years in tech, I was a speaker at Microsoft events, competitive coder and I write awesome software and apps for a variety of industries.
ContactContact
Thanks to Jennifer Huebner.