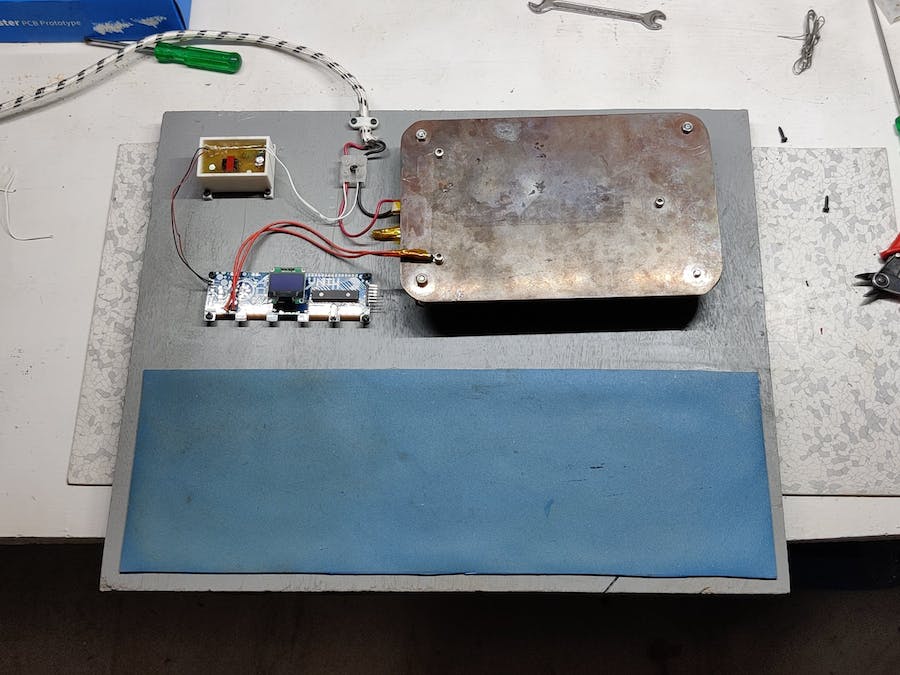 Hey Everyone what's up!

The goal for making this DIY SMT Reflow was simple, it's easy and cheaper to make a working SMT Reflow Hotplate instead of buying a proper hotplate.

The rest of the parts are for Preparing the Temperature sensor.

The Melting Temperature of solder paste depends on the Flux percentage and the ratio of Sn-Pb which in my case is 63/37, Sn63-Pb37.

Here's the Block Diagram of this Hotplate Project!

The hotplate is powered Directly from the AC Supply, no Relay has been added to the hotplate line for power cutoff or Control. The reason for this is pretty simple, adding Relay to this setup means we need to monitor the temperature and cut the supply of Hotplate whenever the hotplate reaches a certain temperature and then reconnect when hotplate temperature goes down.

On the Iron's Element, there's a mechanical part in iron which is the thermostat.

The thermostat is an important component of an electric iron that regulates its temperature, when Iron reaches a certain Temperature, the Thermostat turns off the power of iron. This mechanism consists of a bimetallic strip that is made from Brass and iron, when the temperature of the iron exceeds a certain limit, the strip begins to bend towards the metal with a lower coefficient of expansion. As a result, the strip ceases to be physically connected to the contact point, the circuit opens and the current ceases to flow.

you should definitely check out this great article about the working process of iron from here.

So the bottom line here is that the iron already has a Power Cut Off circuit that controls the temperature of Iron, we only require a Temperature monitoring setup that displays the accurate temperature of the Copper surface.

For measuring Temperatures higher than 150°C, I Prepared an NTC Based Atmega328PU Setup which displays the Hotplate Temperature on an SSD1306 OLED Display.

Setting up NTC is pretty easy, we just need to add NTC with the same Value resistance (in my case 10K) in series with the NTC according to the given schematic.

The Main Part of this Project is the Element Setup. We can put PCB Directly onto the Iron's Surface and it will reflow the PCB without any issue but the iron surface area is not enough to reflow large PCBs, to increase the Reflow Surface, I bought a Copperplate of size 150mm x 250mm x 2.2mm.

My plan here is to add the copper plate onto the Iron's Element. The copper heat transfer rate is pretty great and it will be perfect for this project.

I Drilled Mounting holes in Iron's Element and copper plate, with M3 Screws I secure both of them and made a huge Heating Plate setup.

Three Holes were for Securing Iron's Element with Copperplate, and Four holes were for adding the copper plate onto the wooden base.

I've Drilled Mounting holes in the wooden base according to the Hotplate holes and then used M4 Screws, Washers, and Bolt to hold the Copperplate in Mid Air away from the wooden surface.

But Before Screwing them all together, I painted the wooden board and added an ESD Mat on it.

Adding ESD Mat here is not necessary, I added this because it's heat resistive and after Reflowing any PCB, we can place that PCB (which is still HOT) on the Mat, and the mat won't melt.

To get DC from the AC Supply, I took a 5V 1 A Charger Circuit and designed a Custom Body for it.

I 3D printed the Body with White PLA and then prepared an Epoxy Mixture for potting the whole box in order to make a DIY Isolated 5V Power Supply!

The potting process begins when the substrate is placed inside the pot. A liquid compound is then poured into the pot, filling it and covering the device completely. The liquid hardens, encasing the device inside it (in our case, an AC-DC Charger Circuit)

I Pour Epoxy and Hardener into Two different paper cups (each 30ml) and then mixed both of them together.

Epoxy Resign stays liquid but when the hardener is added, its composition starts to change and it solidifies.

After mixing Epoxy and Hardener together, I placed the charger circuit inside its 3D Printed Body and pour the mixture into it.

It solidifies completely after few hours and the end result was this HARD and ISOLATED 5V Power Supply.

I connected this potted power supply with the Temperature sensor setup and with AC Supply according to this schematic and our setup was basically completed!

Reflow soldering is the most widely used method of attaching surface mount components to printed circuit boards (PCBs). The aim of the process is to form acceptable solder joints by first pre-heating the components/PCB/solder paste and then melting the solder without causing damage by overheating.

For the final checking of this process which is to Reflow some PCBs on it, I will be using these two PCBs which are from my two previous projects!

I designed the PCBs in OrCad cadence and send them to JLCPCB for samples.

you can check them out from here if you want to get great PCB service for a low price. https://jlcpcb.com/PCH

An ideal method for this is to use Stencil which you could also get from JLCPCB, another method is to use a decent solder paste dispenser which required a different type of solder paste that has a lot of flux in it. flux makes the solder paste less hard. (In my case, solder paste is pretty hard)

I Did the same process with Nanoleaf PCB,

I Added solder paste on LED Pads one by one which really took time and effort but after the hellish work of adding solder paste to each pad, I place SMD WS2812B LEDs on their assigned location and put the whole PCB on the Hotplate for the reflow process and Result was pretty nice.

Hotplate Did actually work, and it's pretty usable for reflowing PCBs for Projects.

It can even reach up to 300°C which can be used to reflow even Metal PCBs, overall I'm happy with the result.

This Hotplate is working Properly however, its temperature sensor setup didn't seem to work after when Hotplate reaches 270°C.

This might be because I'm using a 10K NTC. 100K NTC should be used here which I already have ordered.

Anyways, for Part 1 this is it.

I will make the necessary changes in this Hotplate project and make a part 2 of this project so stay tuned for that!

Leave a comment if you need any help, peace.