A little jewel that you could use for anything: 100% open-source build on KiCAD 5 and FreeCAD 0.18.

A little jewel that you could use for anything: 100% open-source build on KiCAD 5 and FreeCAD 0.18. 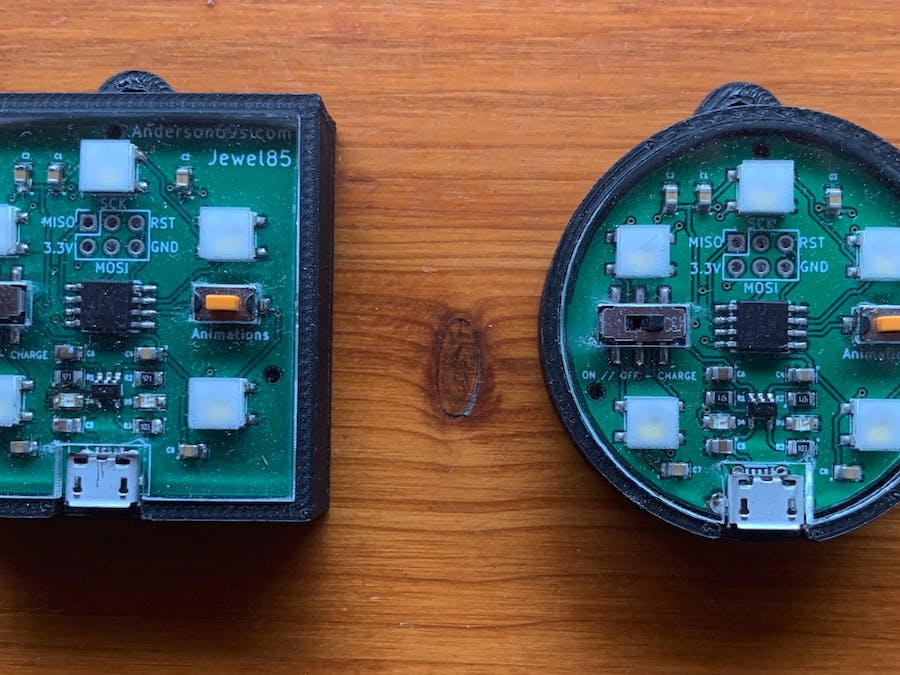 Hello everyone, I hope you are well. Today, I open source project: the Jewel85.

It always keeps the same principle as the TinyJewel85 to wear as a necklace or use wherever you seem, but I added two LEDs and it is now possible to load a 1S LiPo battery 3.7V via micro-USB:

I will start by thanking everyone // companies that made this project possible technically:

The links of the project are in the source part.

Ignoring the safety instructions can cause injury and damage severe.

You have to climb a LiPo battery on the collar, please consider the following information:

The elements must show no visible external fault. Internal short circuits, with all the risks they entail, are likely to occur when the batteries drops, or they receive a shock. If the temperature of the battery seems excessive, immediately:

Set the OFF position Jewel85
In charge
The battery is charged

The TinyJewel85 is good but it nevertheless suffers from some problems from the feedback I got:

It is clear that we learn from these mistakes and that perseverance pays sometime. So I pretty much redesigned to improve the abovementioned points. Small bonus, the resolution of these problems, reduced production costs...

With course still the same philosophy behind the object: simple, sober and strong.

The result is an open source project that provides a simple electronic platform to anyone who wants to appropriate it and customize based on open-source software or not.

Symmetrical, I like the geometric shapes of bases that we all know. The symmetry is found to be a parameter that always attracts the eye and which has always been exposed during my chemistry studies.

Nevertheless, this sleek design allows you to unleash your imagination and allows you to make the necklace or piece of jewelry that please. Since it is possible to change everything...

The case, adornment, support, assembly, use is up to you to imagine... The animations and colors displayed by the LEDs is also customizable by you cheaply.

It was necessary to add the components, but everything falls on a reduced format.

Double layer PCB with a round or square shape, powered by a Li-Po battery 1w delivering a voltage of 3.7V allowing a ATTINY85, steer 5 SK6812. It then becomes easy to use the button to change animation.

Bonus, I even drew all easily reproducible simple boxes in FabLab. Tools needed a 3D printer, laser cutting, some PLA or ABS and a piece of PMMA 2 or 3mm thick:

Simple, with the Arduino community, the versatility of the ATTINY85 and simplicity of the library NeoPixels, it becomes possible to customize the objects easily. Always the same routine to change the animations:

There is also the *.svg, *.stl of the FreeCAD files, all you need to make your...

The Arduino ecosystem so we used USB bridge <-> Serial <-> ISP to customize colors played on the LEDs through the NeoPixels library.

Here are the instructions to customize the code and make its programmer from an Arduino UNO:

BEFORE HANDLING, ALWAYS PLACE THE KNOB IN POSITION OFF ON JEWEL85.

Visit the Arduino website (https://arduino.cc) in the Software section:

Download the latest version of the IDE for your operating system:

You can choose to make a donation or not just before you start downloading:

Install the Arduino IDE on your computer. For Windows users I recommend you use the installer that contains the USB driver for the Arduino.

6.3 Setting up the scheduler

Then open the example -> Arduino ISP:

Then just connect your Arduino UNO to your computer using the USB cable and upload the code:

It's over, your Arduino UNO is ready to send the code on your TinyJewel85.

It only remains to indicate the correct parameters to the Arduino IDE so it can compile and send our code through the Arduino UNO on our TinyJewel85.

LEDs need a library to be driving by ATTINY85, the project uses the famous NeoPixel of Adafruit. Here's how to install it:

If the installation of library went well, you should have access to the example of NeoPixel library:

Go to the preferences of the Arduino IDE:

To the list of additional cards to get the kind of ATTINY85 card in the Arduino IDE:

Confirm by clicking OK. Then go to the card manager:

You can then select the correct settings for Jewel85:

Open the Jewel85 code. There are several easy enough parties to recognize here is an explanation that will help you understand:

The tab button used primarily for the debounce and tracking events, you normally need to change anything in it.

It only remains to connect the Arduino UNO with Jewel85 as for TinyJewel85:

Then send the code on the Jewel85 as with TinyJewel85:

You now know how to change the animations displayed by LEDs and he'll just have fun making your own jewel...