An interesting way to communicate with your Android device through the NFC technology.

An interesting way to communicate with your Android device through the NFC technology. 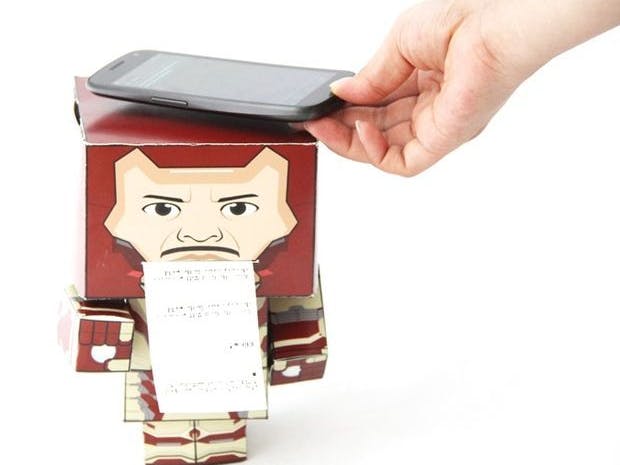 Watch the following video to better understand the Paper Man.

We chose an Iron Man model papercraft which can be downloaded from http://www.cubeecraft.com/cubee/iron-man-mk-42.

You can change the digital pins later, but to match the demo code, stick to this for now.

We need the PN532 library available at https://github.com/Seeed-Studio/PN532

Don’s NDEF library (https://github.com/don/NDEF) is also needed. Download it and place the NDEF folder inside your Arduino libraries folder too.

Lastly we need an Arduino sketch to run. Get the demo sketch from https://github.com/xiongyihui/NFCDemo/blob/master/arduino/nfc_printer.ino

Open the sketch with Arduino IDE. Select the board “Arduino Duemilanove w/ ATmega328” for Seeeduino and the serial port of Seeeduino to upload the sketch.

After setting up the hardware and software, use an NFC-enabled Android device to touch the antenna of the NFC Shield:

A few notes on the assembly:

After the work finishes, your Paper man is ready!

The current version Paper Man only prints text messages, while the printer supports to print images and bar code. Perhaps you can have a try to print a richer message!