Take photos on a Windows Phone and display them on a matrix of 48x48 RGB LEDs, using the Windows Remote Arduino library.

Take photos on a Windows Phone and display them on a matrix of 48x48 RGB LEDs, using the Windows Remote Arduino library. 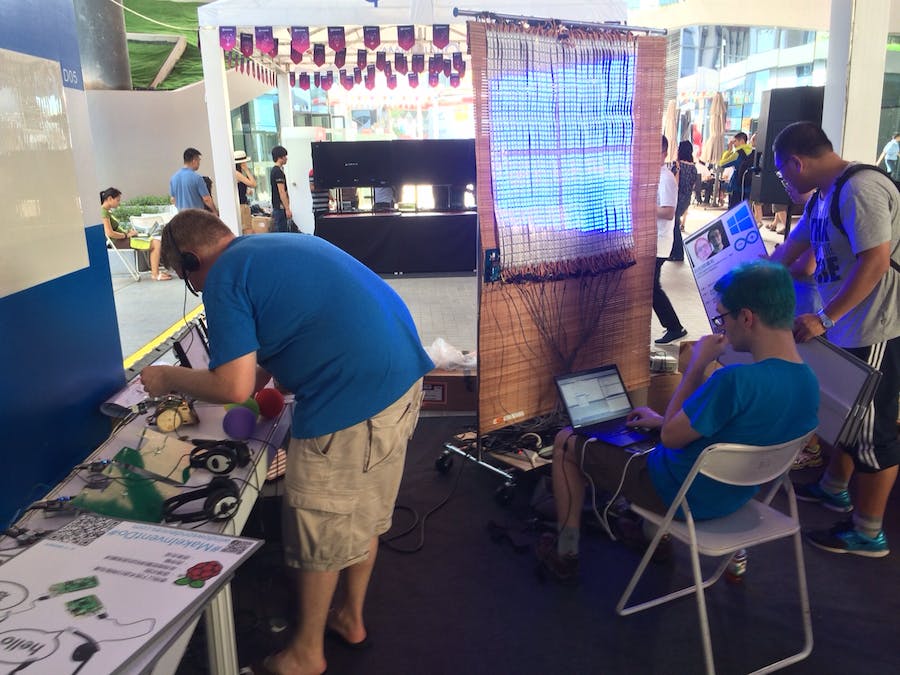 As demonstrated at Maker Faires around the world, it's the Windows Remote Wiring Powered LED Curtain!

The LED Curtain works in two parts. First, a Windows Phone 10 is used to take and process a picture for display. An Arduino™ (or Genuino™) is used to drive strips of LEDs to display the picture on the curtain. The phone communicates with the Arduino using Windows Remote Arduino over a Bluetooth™ connection.

This project highlights the potential of distributed computing for IoT projects. The LED curtain is composed of a 48 by 48 matrix of LEDs. For each LED, and RGB color value is specified. Each of red, green, and blue take one byte to store a value between 0 and 255. The memory needed to store a single picture comes out to 48 x 48 x 3 = 6912 bytes, quite a bit more than the SRAM available on Arduino Uno or Leonardo boards that we wanted to use for the project.

The solution was to offload the picture processing to the phone, and have it convert a picture into a list of color values for each LED. The phone can then transmit those values to the Arduino, and the Arduino can set the LEDs and dispose of the value, greatly reducing its memory requirement. Windows Remote Arduino, combined with a custom sketch of Standard Firmata, provide for easy communication between the two devices.

This post will walk you through how we constructed the curtain and wrote some of the code. The Bill Of Materials is listed and the source code is on Github, so you can follow along and build your own as well!

Looking for more information about Firmata? Take a look at the source code over on Github!  (https://github.com/firmata/arduino)

Safety notice, and some math:

This project involves modifying power supplies and drawing a fair amount of current. You will need to ensure that any outlets, power strips, and breakers you use are rated to handle the power that will be drawn through them.

The power adapters used in this project have a peak draw of 2 Amps each at 100-240V. With 16 power adapters, that means you can end up drawing 32 Amps as peak draw. While you'll be able to condense the 16 power supplies down in to 2-3 surge protectors, you'll need to be careful about how you plug those into a wall outlet for power, or you'll end up tripping a breaker, blowing a fuse, or worse.

On to the Fun!

Start by assembling the power supply connectors. You’ll need to prepare all of the barrel connector to wire converter pieces, but doing so first helps speed up the next step. If you’re building to the frame as designed by the bill of materials, you’ll want to have a few feet of cable from the ends of the wires to the power brick. We left around eight feet to have plenty of spare cable to work with, but 4-6 feet (1.5m to 2m) would adequately stretch from the bottom of the curtain to the floor.

Closeup of barrel connectors plugged in to power supplies

Next, lay out the bamboo curtain and position the LED strips on top of it. You'll want to leave some space on the left side of the curtain for the Arduino to be attached, and the strips should run top to bottom on the curtain. The left most strip needs to have the arrows pointing upward, the second left strip with the arrows downward, the third with the arrows up, and so on, alternating for all 48 strips.

Side note: why the alternating pattern?

The back and forth snaking of connections is necessary due to how the Arduino addresses the LEDs on the strips. The Arduino doesn't actually see this project as a two dimensional matrix onto which it can display an image. Instead, the Arduino treats all of the LED strips as a single, long strip. As mentioned in the introduction, the phone handles the process of converting the picture to the needed RBG values, but it also handles ordering the list of values for the Arduino, so there is a direct mapping between the list of color values and the LED that each color value is associated with.

Before soldering can begin, you need to plan out the power distribution for each LED strip. Each power adapter can properly power a group of three strips. This means that between groupings of strips, you must not solder the 5v cable to the LED strip. So, you’ll want to take the appropriate wire on the connector between strip three and strip 4, separate it out, and cover it with an end cap or other appropriate covering. Consult with the data sheet for the LED strips for which position is the 5v line.

Next, you’ll need to splice a power supply connection into the 5v and ground wires of each grouping of LED strips. This is most easily done with some wire splitters, and your choice of crimp connectors/screw connectors/solder connectors. You want to be sure that you use the correct wire of the connectors, and that you leave some cable to solder this newly connected wire on to the LED strip (so that the strip can actually be connected to ground and power).

Finally, solder the LED strips to the connector you planned out for them. On every third strip, you should only be soldering three wires, instead of four, since you shouldn’t be soldering the 5v power wire. Additionally, solder connections wire to the bottom connections of your far left strip for the Data and Clock lines. At the end of soldering, you should have 48 separate LED strips, 16 of which are connected (or have open connections available to connect to) the power adapter wires, and one of which has dangling Data and Clock lines for connecting to the Arduino.

TX and RX lines connected from Leonardo to Bluetooth Module, and ICSP and SCK connection made
Power and ground connecting to bluetooth module, and another ground to the LED strips

Next, assemble the clothes rack. If you’re using the same clothes rack and curtain as in the BoM, you’ll probably find it easiest to adjust it to its tallest position. If there is a lot of space between the top of the LED strips and the top of the curtain, you may wish to bundle the spare curtain up and secure it with zip ties, to help raise the viewing level of the LED strips.

Then, attach the shower curtain hangers to the top of your curtain, and hang the curtain from the top of the clothes rack. Optionally, if there is a lot of empty curtain space hanging at the bottom of your LEDs, you may wish to bundle it up and secure it with zip ties.

A wooden board helps hold the power supplies and keeps the curtain mobile!

Clone the LEDMatrix Github repository listed in the software section below. In the “Arduino” folder, you’ll find three sub folders, with Arduino sketches that can be used for different project configurations. The GitHub readme describes what each one is for. For this project, you’ll use the “LedCurtainFirmata” folder. This is a modified version of Standard Firmata (https://github.com/firmata/arduino/blob/master/examples/StandardFirmata/StandardFirmata.ino

In this project, the Arduino handles very little of the program’s logic. A 48x48 matrix of LEDs is simply too large for the Arduino to process pictures and determine how to color each LED to draw the picture. As you can see in the Sketch, the Arduino receives that information from the phone, which has plenty of processing power to handle the task.

To see just how the phone handles the task, go back in the root of the GitHub repo and open the “UWP” folder. Inside, you’ll find a “RemoteLedMatrix” Visual Studio solution file. That solution file is configured and ready to deploy to a phone running Windows Phone 10.

As listed in the software requirements for the project, you’ll need Visual Studio 2015. The Community Edition works great, is free, and can be found at this link here (https://go.microsoft.com/fwlink/?LinkId=691978)

The code for the project is pretty straightforward. It leverages the Remote Wiring to communicate with the Arduino, so the lower-level communication is handled for us. If you’re interested into a deeper dive of Remote Wiring, the source code is available on Github (https://github.com/ms-iot/remote-wiring).

The project code here needs to take a picture, scale the picture and convert it to a list of colors, and send that list of colors via to the Arduino using Firmata:

The LED Screen powered by Windows Remote Arduino is a complex project which demonstrates the power of hybrid solutions. A similar project could be completed with a smaller dedicated panel such as the Adafruit 64x32 LED Matrix (https://www.adafruit.com/products/2277) or 32x32 Matrix (https://adafruit.com/products/1484), the latter of which has code available in the GitHub repository for this project.

38 projects • 2462 followers
We want to transform lives by connecting people, processes and objects. Build what matters most to you. Create the Internet of Your Things.
ContactContact
Thanks to Windows IoT.