Use Nextion displays with the XOD visual programming language.

Use Nextion displays with XOD

Use Nextion displays with XOD

Use Nextion displays with the XOD visual programming language. 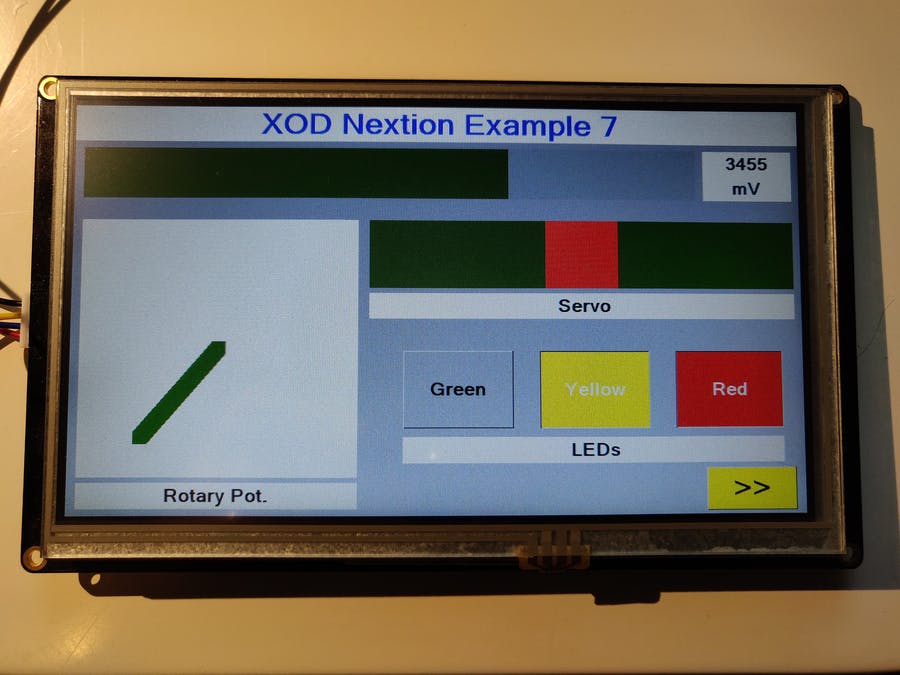 Athanasios Seitanis has created a simple to use Arduino library for Nextion touchscreens, named EasyNextion. I've converted his library into a XOD library, to make it available to xoders. The XOD nextion library provides most, but not all of the functionality of the EasyNextion library.

Nextion Editor is used to develop the graphical user interface of the touchscreen. It is a free to use (but not open-source) desktop application that runs on Microsoft Windows. Projects are compiled to TFT files which are then uploaded to the Nextion display by one of two routes:

I would recommend direct transfer over serial, because it is much more convenient. For a serial transfer, a usb to serial adapter (such as an FTDI232) is requried. The adapter is connected to a USB port of the windows machine running Nextion Editor. Connections between the terminals of the Nextion Display and USB-serial adapter are as follows:

To upload a project to the Nextion display via serial, first open it in Nextion Editor. Next, click on the Upload button:

The following dialog will be displayed:

You can specify a com port for the Nextion touchscreen, or use the Auto search option to automatically detect the correct port. Click Go to initiate the upload.

Download and install the latest version of the XOD Desktop IDE. To install the nextion library. In XOD IDE, hit File → Add Library and enter the library name:

Following installation in the IDE workspace, the library will be visible in the project browser. To find out the function of a node, select the node and hit H to invoke help:

To upload a patch to the Arduino, select Deploy → Upload to Arduino.... If you want to run the patch in the debugger, tick the checkbox Debug after upload (circled in red below).

The following examples demonstrate how to use the XOD nextion library. All have been tested using an Arduino Mega 2560 and a Nextion Enhanced 7.0'' HMI Touch Display (NX8048K070_011). All XOD patches can be found in the XOD nextion library. The human machine interface (HMI) files for the nextion can be downloaded from the github repository (links are provided).

The Arduino reads the value attribute of the slider (h0) and converts it to a servo position.

The XOD patch contains comments explaining the purpose of each node.

In this example the Arduino reads the text of the title (t0) and writes to the text box t1.

In this simple example we have three LEDs connected to the digital pins of the Arduino:

Dual state buttons can take one of two values:

The Arduino reads the value attribute of each dual-state button and switches the corresponding LED on or off as appropriate.

So far we have simply read or written the values of objects on the Nextion display. We will now move on to detecting when a user has touched the screen. All objects in the Nextion GUI can detect two touch events: press and release. We can attach code to these events that will send a message to the Arduino.

In the Touch Release Event of each button we will place a serial command (used by the EasyNextion library) that will send a trigger ID to the Arduino. The command takes the form:

where XX is the numerical ID of the trigger in hexadecimal notation. N.B. trigger IDs can be any integer in the range 0 to 254 and should be entered in hexadecimal notation (many decimal to hexadecimal converters are available online, e.g. https://www.rapidtables.com/convert/number/decimal-to-hex.html). We will assign the following commands to the buttons of the keypad:

When the Arduino receives the string 23 02 54 03 it knows that button 3 has been pressed and released.

Pages of the Nextion display are numbered starting from 0. In this example our user interface has three pages (0, 1 & 2). There are number boxes to display the current (n0) and previous (n1) page numbers. Buttons are provided to navigate through the pages.

In the Preinitialize Event of each page we place a serial command of the following form:

where XX is the number of the page in hexadecimal notation. This command tells the Arduino which page is about to be loaded.

N.B. the nextion library's read/write nodes operate on the objects of the current page.

Example 7: demonstration of a range of functionality

Example 7 combines many of the earlier examples and adds some new features to create a project that is useful for testing much of the functionality of the XOD nextion library. The Nextion GUI comprises two pages.

N.B. In this example we want the Nextion display to remember the values of a number of the widgets, even when a page change has rendered them invisible. For example, a user taps the Green dual-state button (bt0) on page 0 to switch on the green LED, then moves to page 1. When the user returns to page 0 they will expect the Green dual-state button to still be in the on state. This behaviour is enable by setting the vscope (variable scope) attribute of the widget to global.

Setting the vscope (variable scope) attribute of a widget.

For this example we need to connect the following devices to the Arduino (signal pin given in parentheses):

N.B. The read/write nodes of the XOD nextion library operate on the currentpage. This means that there are two important considerations for multi-page GUIs:

The example07-full-demo patch uses get-page-id to identify the current page so that it can send the correct data to n0 and only update visible objects.

The XOD nextion library is being used in the development of a non-invasive ventilator: