Humans are selfish, consuming all of the earth's resources and steadily ruining it, resulting in negative consequences such as climate change, which causes global warming, and a significant decline in the population of species such as bees and birds.

Currently, the way logistics works from the producer to the consumer, take up a lot of transport. Most of it is done with the help of vehicles running on the internal combustion engine with an average efficiency of 20%. Which is far far less compared to any other means of transport running on renewable resources. This is a major cause of CO2 emissions. This Carbon dioxide emission results in global warming and climate change. Why are we not moving to renewable sources of energy like solar energy, wind energy, hydroelectric energy, or clean energies like nuclear energy? They take up a lot of investment and upfront cost where the use of petrol/diesel as an energy source is easy.

Coming to our solution: The last-mile delivery of goods is very important for any organization as it the last part where there is an interaction of the customer. If the delivery is hassle-free, customers will order again hoping the good service. But most of the time this is not the case, the delivery agent messes up the location and then we should communicate to him the current location or parcel would get re-routed to another courier office and the customer runs behind the parcel office to office. All these involve unnecessary vehicle movements resulting in the emission of CO2 and CO gases.

The use of autonomous electric delivery vehicles is the best alternative for this and companies like nuro are already working on it which is a very good thing. Giants like Amazon are developing drone-based delivery which will help us to reduce emissions significantly. Multirotors or popularly known as drones or quadcopters can be a potential replacement for the delivery of goods in the last mile. The last mile transport of goods itself takes a lot of energy due to the unorganized routes and multiple delivery agents reaching the same location, mismanagement of delivery vehicles. Drone delivery can be a potential replacement for the same.

But both autonomous delivery vehicles and drones are needed to be charged frequently and their battery might not last long. Especially in the case of quadcopters and multirotor, each motor is spinning at the rpm of around 5000 to 10000 depending on the KV of the motor. Each of these motor's power consumption varies between 100 to 300W. Hence the battery will only run for 30 minutes to 1 hr. But within this time a drone can travel 50 to 60 km based on the payload and its battery capacity. But drones are efficient in reaching the place faster because of the telescopic air distance and not road distance.

But you might be thinking why can't one add a bigger battery? But the bigger battery will in turn increase the weight resulting in decreasing the flight time. So optimal payload along with the efficient battery is the only solution.

To address this issue, we suggest autonomous charging stations to drones and autonomous delivery vehicles that can come and charge themselves and take off from there. Kind of birds nest in the case of drones and garage in the case of UGV or Unmanned Ground Vehicles. But drones and UGVs are needed to be observed and maintained carefully to get the best out of them

In a drone since its parts are moving at such a high RPM, if there's only one slightly loose screw can cause catastrophe because of amplification of the vibrations due to the high-speed motor. Quick feather-based SAAAS solution will be used to detect these minute flaws and alert them regularly as the drones hop from one charger to another.

This proactive predictive maintenance can also be used for the UGVs to detect abnormalities that cannot be detected otherwise. I know the above explanation is long but it was much needed to make my point.

Step 1: Get the required things

Get all the required things, like a quick feather, raspberry pi 4, BLDC motors, Wooden board, Soldering Iron etc.

I'm planning to make the device attached to the charging pad where the drone comes and lands in the case of an autonomous drone charger and the SAAAS device will be kept on the UGV itself when it comes to charging in the case of UGV. The best thing about these charging stations is these run on solar energy by which we will achieve our goal of 0 carbon footprint thereby stopping the emission by last-mile transport vehicles. Also since these are installed on top of street lights these won't take up any space.

SAAAS device will run the diagnostics and check for flaws like

Broken propeller (These damages are common while flying a drone)

Broken propeller damages are dangerous because any off-centred mass running at 10000 RPM can be a lethal weapon. As drone travels in air it can fall off and damage people or even can cost lives due to high-speed razer sharp propeller blades.

It will mark them as an anomaly and the same will be uploaded in the dashboard.

Charging status can also be shared to the cloud marking the charger pad busy.

I tried collecting the data through the IMU sensor i.e MC3635 but unfortunately, my IMU was giving constant output and there was no change in the value of it it was like this, I managed to verify this by connecting the I2C0 output to Arduino Mega board and read the data to the serial port by accessing the I2C address of the sensor (0x44h)

So I was left with the only option to use a microphone to capture the anomaly in the sound of drone blades. So I loaded the simple stream audio over serial firmware and then started the DCL to collect the data over serial itself.

Due to Covid 19 pandemic here in India, I had to rush to my hometown from my workplace, Bengaluru. So Don't have any hardware other than few dev boards.

Now I trained the model and obtained the result

I have already uploaded the test data and categorised them as well now I can use that data to test my model on the analytics studio itself.

Download the generated model according to your requirement. If you want to change the output text and modify something you can always go for the code version where you'll have the privilege to edit and test things. Here I'm downloading the.bin file for my requirement because I will be using the output information from the quick feather on the raspberry pi.

Here's the working video and the demo for the project

Conclusion: We are in a stage where it is a necessity to switch to electric vehicles or we will not be able to control or reduce climate change. Drone-based or UGV based delivery is the future. For example, consider food delivery, at least in India companies like zomato and swiggy

On average, 10.7 million customers ordered food every month on the platform in India in FY20 with an average monthly frequency of over three times. In the nine months ended December 2020, 99.3 per cent of the food delivery orders came through Zomato's mobile application.

These deliveries are carried out individually on a vehicle that runs on a non-renewable fuel. This makes the process inefficient. Drone-based food delivery is the best replacement for this last-mile delivery and our proactive predictive maintenance device SAAAS will facilitate the diagnostic check at the charging station. This will be new normal when the future is full of autonomous delivery vehicles.

Contact based charging is always the best way to charge because there is no 40g% loss of energy which is common in wireless charging. Embedding the conductors in the legs of the drone helps us to charge the device quickly and neatly.

I would like to submit my project under the line powered category of the contest. 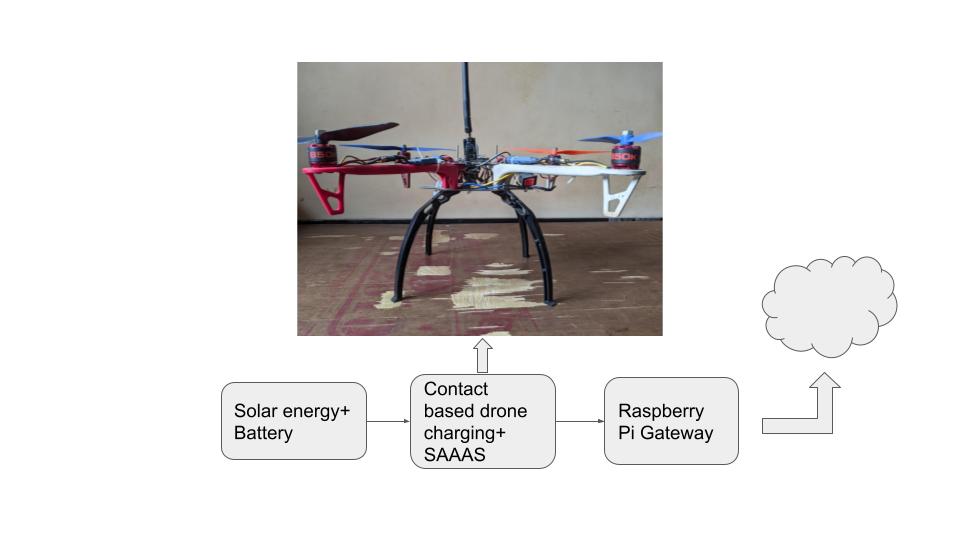