Handmade Drawing Recognition Interface as from my Smartphone

Handmade Drawing Recognition Interface as from my Smartphone

I was inspired by such features on our smartphones. My smartphone “Vivo V7” has a function of Drawing Gesture Recognition, thanks to this model working on the smartphone processor. But I want to bring those features to tiny edge devices as well

Can a touchpad run on a single microcontroller (MCU)? Can an MCU classify complex gestures in real-time, delivering inference at the edge with low power and minimal flash usage?

This technique uses TinyML to recognize gestures robustly. In the interest of reaching as many developers as possible, I won’t assume any understanding of the field.

By the end of the tutorial, we’ll have a setup that allows us to draw on-screen gestures and recognize them with high accuracy using TinyML. The components involved are:

📌 Why draw and use TinyML?

It has been a decade since touch screens became ubiquitous in phones and laptops, but we still generally interact with apps using only minor variations of a few gestures: tapping, panning, zooming, and rotating. It’s tempting to try to handcraft algorithms to identify each gesture you intend to use for your touchscreen device. Imagine what can go wrong when dealing with more complex gestures, with perhaps multiple strokes, that all have to be distinguished from each other.

Existing techniques: The state-of-the-art for complex gesture recognition on mobile devices seems to be an algorithm called $P (http://depts.washington.edu/madlab/proj/dollar/pdollar.html). $P is the newest in the “dollar family” of gesture recognizers developed by researchers at the University of Washington.

$P’s main advantage is that all the code needed to make it work is short and simple.

$P is not very accurate

Another limitation of $P is its inability to extract high-level features, which are sometimes the only way of detecting a gesture.

A robust and flexible approach to detecting complex gestures is the use of machine learning. There are a number of ways to do this. I tried out the simplest reasonable one I could think of:

This converts the problem into a classification and pattern recognition problem, which NNs solve extremely well. In short, it’s much harder than you think to write thecode that explicitly detects a stroke a user made in the shape of a digitorsymbol, for example, without NNs.

A machine learning algorithm learns from a dataset in order to make inferences given incomplete information about other data.

In our case, the data are strokes made on the screen by the user and their associated gesture classes (“alphabets”, “symbols”, etc.). What we want to make inferences about are new strokes made by a user for which we don’t know the gesture class (incomplete information).

⭐ Allowing an algorithm to learn from data is called “training”. The resulting inference machine that models the data is aptly called a “model”.

Like any machine learning algorithm, my network needed examples (drawing gestures) to learn from. To make the data as realistic as possible, I wrote a data collection code for inputting and maintaining a data set of gestures on the same touch screen where the network would eventually be used.

To understand the data set collection, we will need some knowledge of pixels. In simple terms, a pixel can be identified by a pair of integers providing the column number and the row number. In our case, we are using M5Stack Core2 which has a TFT 2" Touchscreen with a resolution of 320 X 240 pixels.

⭐ Converting touched points on the TFT Touch screen to images then rasterizing would be complex to understand and to do on our MCU, so I took another approach. Since Neural Nets are very excellent at pattern recognition why not feed pixel locations per drawn sample and let's see how well it performs. That's the power of Machine Learning when you want to skip the implementation of your own algorithms on your data. Check the below image to understand more. The code for the data collection is available in the code section.

Once your dataset is collected it would look like this, I collected 100 samples for each gesture [w, @, c, m]

To train the model, I used the Neuton TinyML because it is a free no-code tool that allows you to automatically build ML models of optimal size and accuracy, and embed them into ultra-low-power MCUs.

Moreover, it is easy to upload CSV datasets and get very small models, ready for deployment, without additional quantization or compression.

First, create a new solution on the Neuton Platform (https://neuton.ai) and upload your dataset.

By the way, if you don’t have your dataset ready, you can start with pre-trained datasets for a similar problem, for example, the well-known MNIST dataset. On the Platform, you also can explore a lot of Tiny ML solutions and Use Cases you can use for your inspiration.

The platform provides step-by-step instructions for each of them, including a simple guide for model embedding, so it is so easy to follow them even if you are new to machine learning and edge computing.

In our case, we upload the previously collected dataset to New Solution and select the target variable. In our case, it is the label.

Set TinyML model training parameters as shown below and start the training.

Once the training is complete, you can check the analytics below and model accuracy. In this case, accuracy was about 97%.With only 99 coefficient and only 2.672 KB embedding size, that's really freaking awesome! Such a tiny model footprint would really allow such models to be implemented in future touchpads and make laptops smarter. :)

To further test the value of my model, I also did Web prediction on the Neuton console, and it really performed well.

Download the model for embedding for the M5Stack Core2 device,

Step 3: Embedding on the device

After your model is downloaded, extract it and put it in the same folder where your main Arduino code file is.

The important functions here are, neuton_model_set_inputs - to set input values, neuton_model_run_inference - to make predictions. Check the full source code in the code section.

Hurray! We complete all the necessary steps. Now it's time for action. We have successfully embedded the model in our device, now we are going to make a Python script to open some Apps based on drawn gestures detected.

The code is very simple, we listen to the serial port and use the bytes sent from our device to start the windows application using their AppID, to get your AppId, go to Windows Power Shell and type this command get-StartApps

You can now have a very productive device, and you don't need to be an expert or data scientist to do this. 🤣

I think my further case will be about system shortcuts just by drawing a symbol on a screen. And I’ve got to admit, it’s indeed a natural and quick way to interact with a touch screen, because traditional keyboards and touch buttons, although much improved aesthetically over the years, require a lot of attention to hit the right button. :)

I am hopeful that future embedded devices and laptop trackpads will be equipped with such TinyML draw gesture recognition models and make our daily interactions with apps much faster. Hope you liked this tutorial. 😃 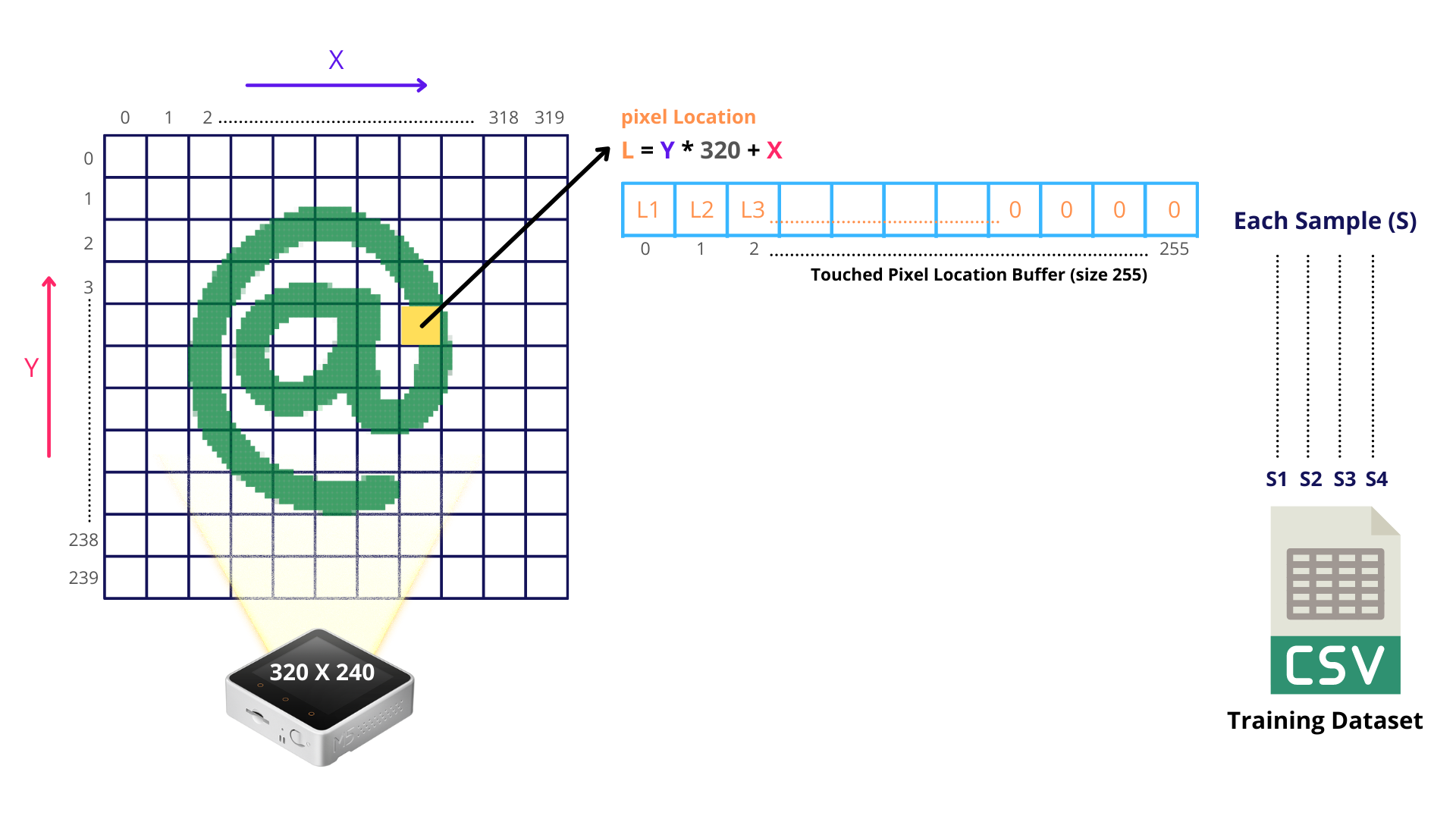