Send the readings of an SHT25 sensor to Google Sheets using an Adafruit Huzzah ESP8266 for weather report.

Send the readings of an SHT25 sensor to Google Sheets using an Adafruit Huzzah ESP8266 for weather report. 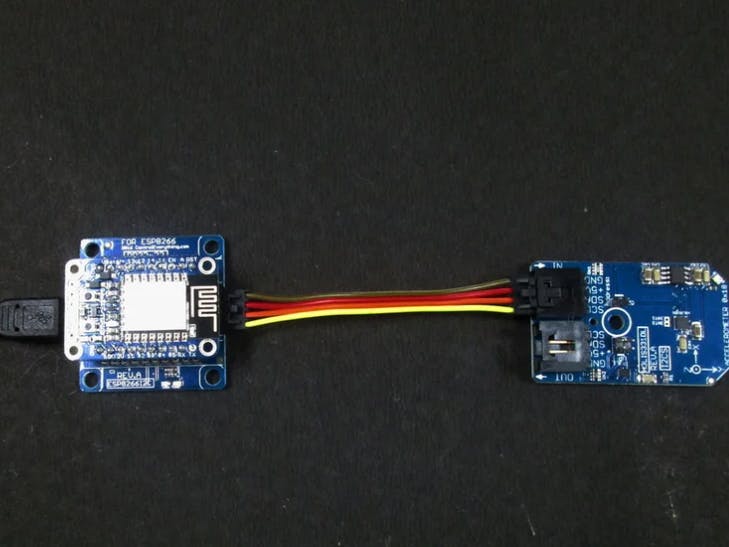 In this blog, let's send the readings of a temperature and humidity sensor to Google Sheets using an Adafruit Huzzah ESP8266 for interfacing and creating internet connection to send the data to its destination.

Fetching the real-time readings of sensors interfacing with ESP8266 and send the data to different Cloud platforms is much simple.

We are going to use Wire.h library in Arduino IDE for creating the two wired communication between Adafruit Huzzah Board and SHT25 sensor I2C module and I2C cable.

To avoid the complex wiring structure, I am going to use the I2C adapter for Adafruit Huzzah designed to connect the I2C sensor.

After Initializing libraries, We will be defining the I2C process use to fetch the sensor readings to convert them and shift the 8 bits data as per the requirements:

After the execution I2C modules, Let's learn about how to fetch the data by using WiFi libraries and send data to online host id using specific API key:

Script ID is mentioned in “web apps URL” while Gscript code will be published, just copy and paste the id mentioned below in the topic about "automate the google sheet" and initialize in above commands

Current web app URL will appear as below:

Further used in ESP8266 code for fetching the data from sensors

We are going to use the HTTPS Get request to connect the data to the host id mentioned in the gscript editor where we coded our data further to connect with google sheet.

Always Give respect to the to the things which give you the urge to start research and pen down the work you have been doing to share with the world.

Will be looking for your comments. Have a great day! :-)