Never experience the nightmare of being stuck on the loo again due to running out of toilet paper!

Never experience the nightmare of being stuck on the loo again due to running out of toilet paper! 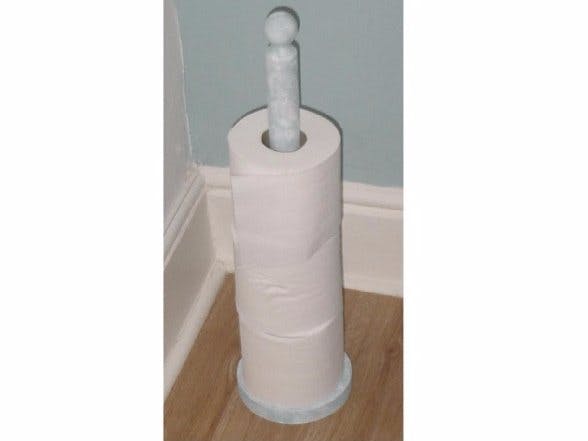 Fed up of your housemate/lover/self using the last of the toilet paper and never replenishing it...?...

Using the new Amazon Dash Replenishment Service we can avoid such a situation ever occurring again! When the customer-specified low stock stage (suggested at 1 roll) is reached (with public holidays taken into account) an order will be sent out for a new pack of the worlds most used paper...

Fortunately the company Charmin has done some research and found that amongst its' customers, the number of days a standard roll of bath tissue usually lasts in the most-used bathrooms in the house is five

We will be adapting an existing Free-standing toilet roll holder and set of Kitchen scales to achieve the prototype, before investing in tooling.

I will burn/drill a hole through the centre of a set of kitchen scales (with a clear plastic pan/tray or alternatively use something like these) , and then slide them down the toilet-roll-holder to be positioned beneath the first roll. Eventually I will use inlaid Load cells of 0.78kg, one on each side/quarter of the base of the stand giving a maximum combined reading of approximately 1.55kg

Taking the average weight of a roll of toilet paper as about 227g, from the well known loo-paper fact-site at http://encyclopedia.toiletpaperworld.com/toilet-paper-facts/toilet-paper-quick-facts , we can predict the total weight of toilet rolls should not exceed 4 x 300g = 1200g approx.

As a prototype until I get around to ordering the new ESP32 I will be Utilising an arduino Nano (for ADC) and raspberry pi (for Ordering via web), but suffice to say the situation is basically the same, just the code will change and schematics vary a small amount.