A joystick system with an integrated credit counter. It also includes a Simon say game to obtain credits and enable the insert coin buttons.

A joystick system with an integrated credit counter. It also includes a Simon say game to obtain credits and enable the insert coin buttons. 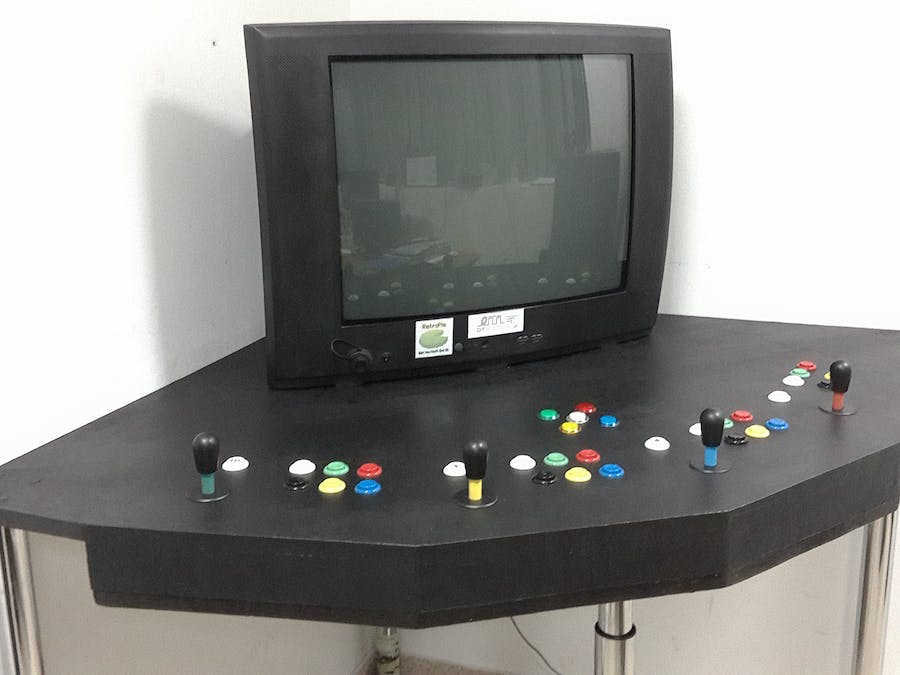 Thanks to the emulators available nowadays I was able to make my own arcade cabinet. Although I employed genuine arcade joysticks and a vintage CRT display I didn’t get the same feeling that playing the original arcades. When playing the original, death was dramatic: if you "died" in the game and you wanted to continue playing you had to spend a valuable coin. Since emulators let you simulate the insertion of a coin just by pressing a key, in practical terms you have unlimited lives and the feeling is lost. To solve this I devised a joystick system with an integrated credit counter. The system disables the insert coin buttons unless credits are available and includes a little challenge that must be won in order to obtain them.

It is the Simon says electronic game created by Ralph Baer and Howard J. Morrison in 1978. The following description of the game has bee taken from Wikipedia:

The device has four colored buttons, each producing a particular tone when it is pressed or activated by the device. A round in the game consists of the device lighting up one or more buttons in a random order, after which the player must reproduce that order by pressing the buttons. As the game progresses, the number of buttons to be pressed increases.

As in the original Simon says game there are several skill levels. The number of credits obtained when the game is won will depend on the selected skill level.

The compiled firmware can be downloaded from http://www.dte.us.es/Members/guerre/firmware_arcade/at_download/file. The source code is available at https://github.com/gambaman/ArcadeJoystickX4PlusSimonGame.

In order to program the board you will need the Teensy Loader application available at https://www.pjrc.com/teensy/loader.html. If you also want to recompile the firmware you will need the avr-gcc compiler as well as the GNU Make tool.

Of course, in order to enjoy playing you will need games and/or emulators, for example the MAME emulator.

The components must be wired as shown in the following schematic:

This step is not required unless you want to modify the source code. From a terminal/command line go to the folder/directory containing the source code and execute the following:

This will generate a .hex file containing the compiled firmware. After connecting the teensy board you can program it as shown in the next section or, if you have installed the command line version of the teensy loader application, program it directly by executing this:

You will be requested to push the button of the teensy board. Do so and the firmware will be downloaded.

You can find a detailed description of the following steps at https://www.pj rc.com/teensy/loader.html.

When connecting the system to your computer it will recognize a set of joysticks. No special drivers should be needed. However, if the system is going to be used with arcade emulation software you will need to configure the emulator properly. First you will need to set the first four detected interfaces as the joysticks of the players 1, 2, 3 and 4. Also you will have to set the last button of each joystick as insert coin button. The fifth interface is used for interacting with the emulator and is not linked to any joystick by default (see the next section). You will have to configure its buttons for tasks such as pausing the emulation, resetting the emulated system,etc.

In order to obtain credits you will have to play the embedded Simon says game by following these steps:

Alternatively, if an insert coin button is pressed when there are no available credits then a Simon says game will start in the easiest level.

The firmware is based on the Teensy Gamepad project by Josh Kropf (josh@slashdev.ca) which in turn is based on the keyboard example for the Teensy board (http://www.pjrc.com/teensy/usb_keyboard.html , Copyright (c) 2008 PJRC.COM, LLC).

The Simon game replication was possible thanks to the reverse engineering carried out by Simon Inns (http://www.waitingforfriday.com/index.php/Reverse_engineering_an_MB_Electronic_Simon_game).

You can see the system working at https://youtu.be/ENW7n0ni5kg.