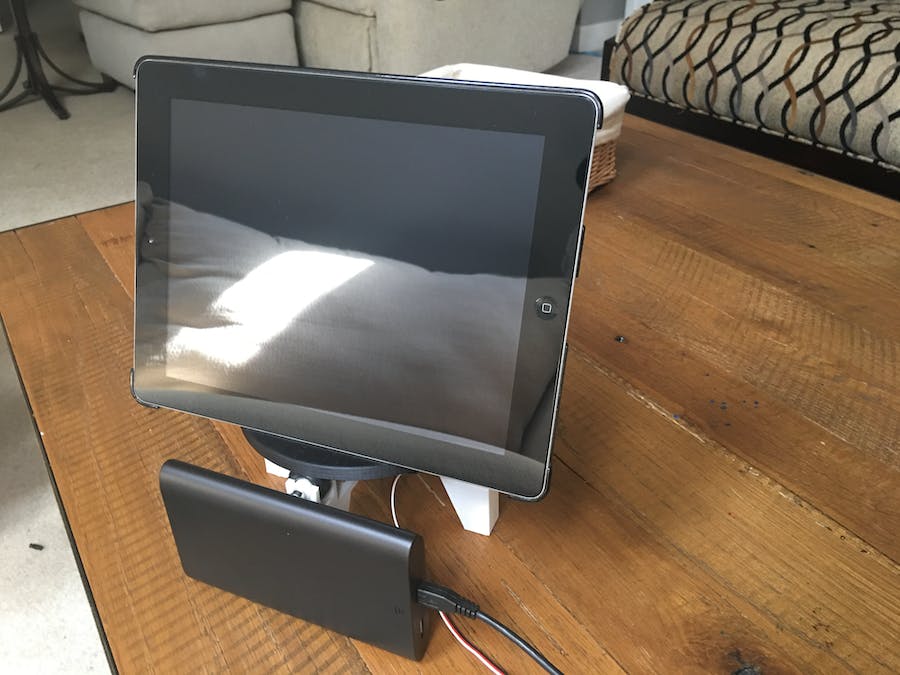 Developing a Walabot as a tool for construction and healthcare applications is a worthy contribution to society, which is why most ideas involve these two industries, but I saw the opportunity to break from the mold of standard submissions. A tracking TV stand can increase the quality of life and the standards of tailoring entertainment to an individual and group's needs. For this reason, I developed a technical demonstration of the tracking TV stand.

This project is intended to develop Walabot's impact in the entertainment sector.

The tracking TV stand will use a Walabot device as the means to monitor activity in front of it. Any display can have tracking with the help of the Walabot. Homes, shopping centers, restaurants and bars all will have more immersing television viewing with the Walabot.

The Walabot will be mounted on the stand facing the viewing area to capture the environment and people in it. Using the radio frequency technology, the Walabot will track individuals' movements and respond by moving the TV to allow everyone to have great views! Whether it is in a shopping mall display to give passing customers the best view or at a house party to tailor to the guests, the Walabot is the perfect device for the task!

The Walabot will work in tandem with a motor to rotate a monitor to give the audience the best view possible.

All tracking will be done at a continuous rate to match the changing environment, which makes the Walabot perfect for this project.

The design for a tracking TV stand is relatively simple. A rotating turn table on which the TV sits is attached on the vertical axis to the stationary stand.

Using a standard servo (I used a Futaba S3003) to power the rotation of the monitor seemed to work. But, I considered that the torque required to move larger monitors would be too great for a standard service to safely manage. Because of this fact, it was necessary to modify the servo's internal to allow for continuous rotation. With continuous rotation achievable, a gearing ratio could be applied to increase the torque output of the servo, which would allow it to turn larger screens.

The parts were made using 3D printed PLA.

To connect the physical assembly to the electrical components of the tracking TV stand, use the following instructions and the diagram in schematics:

The Raspberry Pi has python support built into it, and the Walabot API is in python.

Scroll to the end of the file and add this on a new line.

Press ctrl+x, then y, then enter to exit the file and save it.