AI is added to a LEGO Mindstorms EV3 robot designed to explore a maze. It then drives thru to the exit and avoids the dead ends.

AI is added to a LEGO Mindstorms EV3 robot designed to explore a maze. It then drives thru to the exit and avoids the dead ends. 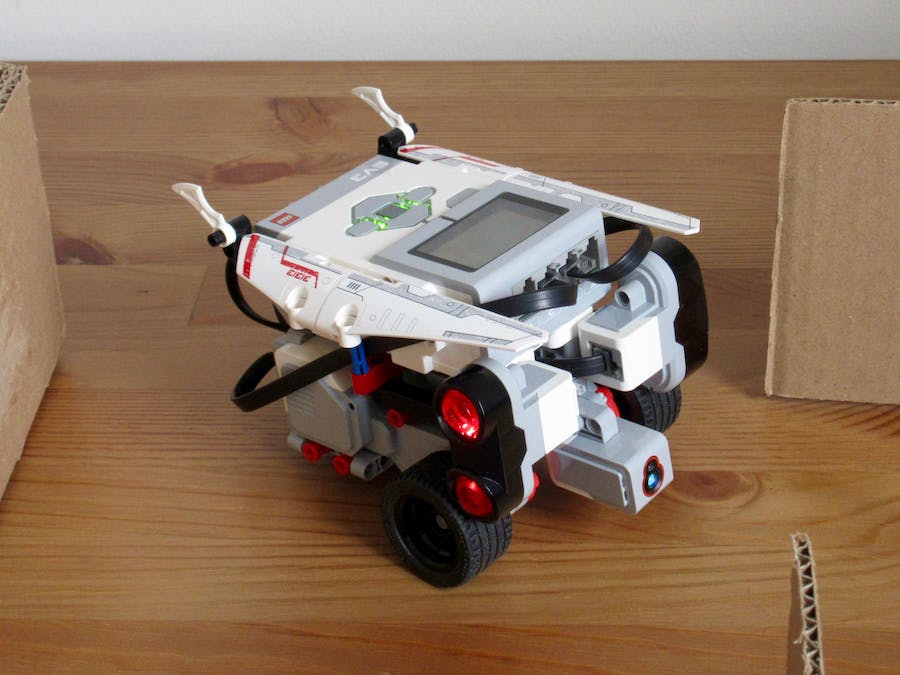 This is a simple, autonomous robot with some artificial intelligence. It is designed to explore a maze and when placed back at the entrance, to drive thru to the exit and avoid the dead ends. It is much more complicated than my previous project, which simply drove thru the maze. Here, the robot must remember the path it has travelled, remove dead-ends, store the new path, and then follow the new path.

The robot is built using LEGO Mindstorms EV3. The EV3 Software runs on a computer and generates a program, which is then downloaded to a microcontroller called an EV3 Brick. The programming method is icon-based and high-level. It’s very easy and versatile.

The program is here: https://github.com/Tony-file/myEV3maze

Step 1: How a Maze Is Solved

There are several methods of navigating a maze. If you are interested in studying them, they are described very well in the following Wikipedia article: https://en.wikipedia.org/wiki/Maze_solving_algorithm

I chose the left-hand wall-following method. The idea is that the robot will keep a wall on its left side by making the following decisions as it goes thru the maze:

One caution is that the method could fail if the maze has a loop in it. Depending on the placement of the loop, the robot could keep going around and around the loop. A possible solution for this problem would be for the robot to switch to the right-hand wall-follower rule if it realized that it was going in a loop. I didn’t include this refinement in my project.

SOLVING THE MAZE TO FIND A DIRECT PATH

The possible turns are: Left, Right, Back (at a dead-end), and Straight (which is an intersection).

Combinations are replaced as follows:

HOW THE ROBOT HANDLES MY MAZE

Step 2: Considerations When Programming the Robot

CONSIDERATIONS FOR ANY MICROCONTROLLER

When the robot senses an intersection on the right but it’s not a right turn, I have found that it’s good to have the robot drive forward about 10 inches (25 cm) without checking its sensors.

Although LEGO Mindstorms EV3 is very versatile, it allows no more than one of each type of sensor connected to one Brick. Two or more Bricks could be daisy-chained, but I didn’t want to buy another Brick, and so I used the following sensors (instead of three ultrasonic sensors): infrared sensor, color sensor, and ultrasonic sensor. This worked out well.

But the color sensor has a very short range, of about 2 inches (5 cm), which leads to a few special considerations as described below:

LEGO Mindstorms EV3 has a very convenient icon-based programming method. Blocks are shown at the bottom of the display screen on the computer and can be drag-and-dropped into the programming window to build a program. The EV3 Brick may be connected to the computer by either a USB cable, Wi-Fi or Bluetooth, and the program may then be downloaded from the computer to the Brick.

The program consists of a main program and several “My Blocks” which are subroutines. The uploaded file contains the entire program, which is here: https://github.com/Tony-file/myEV3maze

The steps in the main program are as follows:

Step 4: The My Blocks (Subroutines)

The Navigate My Block, which controls how the robot drives thru the maze, is shown. The print is very small and may not be legible. But it’s a good example of how versatile and powerful are the if-statements (called Switches in the LEGO EV3 system).

The My Blocks for shortening the path and for driving the direct path are more complicated and would be totally illegible, and so they aren’t included in this document.

Step 5: Starting to Build the Robot: the Base

As mentioned previously, LEGO Mindstorms EV3 allows no more than one of each type of sensor connected to one Brick. I used the following sensors (instead of three ultrasonic sensors): infrared sensor, color sensor, and ultrasonic sensor.

The pairs of photos below show how to build the robot. The first photo of each pair shows the parts needed, and the second photo shows the same parts connected together.

The first step is to build the base of the robot, using the parts shown. The robot base is shown upside-down. The small L-shaped part at the back of the robot is a support for the back. It slides as the robot moves. This works okay. The EV3 kit doesn’t have a rolling-ball-type part.

ThIs step and the next 2 steps are for the top of the base of the robot, the color sensor, and the cables, which are all 10 inch (26 cm) cables.

Next, are the infrared sensor (on the left side of the robot) and the ultrasonic sensor (on the right). Also, the 4 pins for attaching the Brick on top.

The infrared and ultrasonic sensors are located vertically instead of the normal horizontal. This provides better identification of the corners or ends of the walls.

The cables connect to the Brick as follows:

The wings and fins are only for decoration.

The various pieces can be cut and glued or taped wherever needed to form the maze. There should be an 11 or 12 inch (30 cm) space between the side walls in any path with a dead end. The length should be no less than 10 inches (25 cm). These distances are needed for the robot to turn around.

Some of the corners of the maze may need to be reinforced, Also, some straight walls need to be kept from bending if they include a straightened carton corner. Small pieces of thin cardboard should be glued to the bottom at those places, as shown.

The exit has a red barrier consisting of half a red greeting-card envelope and a base made from 2 pieces of thin cardboard, as shown.

One caution is that the maze should not be large. If the robot’s turns are at a slight angle from the proper one, the discrepancies add up after a few turns and the robot could run into the walls. I had to fiddle several times with the Rotations settings of the turns in order to get a successful drive thru even the small maze I made.

A way around that issue is to include a path-straightening routine that would keep the robot a specific distance from the left wall. I didn’t include this. The program is complicated enough as it is, and it is sufficient for demonstrating the AI concept in this project.

This was a fun project and a great learning experience. I hope you also find it interesting.