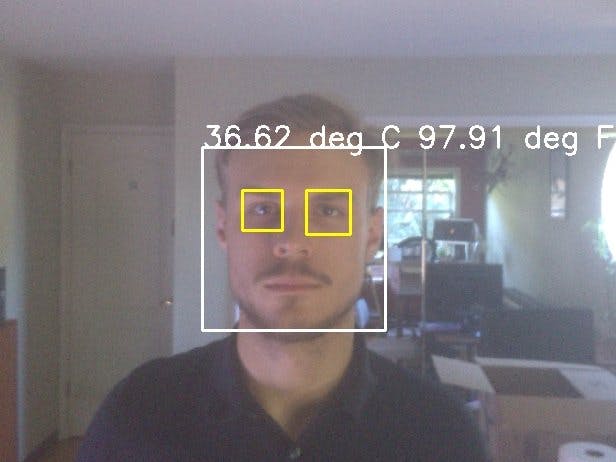 I want to share with you an AI Fever Screening Thermometer, a device I've been working on during past two months.

I combine Thermal (IR) and Visible Spectrum (RGB) cameras in order to:

Result: Facial Detection + Temperature Measurement
The device mounted on the entry to the house

The total BOM sums up to around 300 USD. That's not exactly cheap, but it is still an order of magnitude less than existing proprietary technology, which AI Thermometer often exceeds.

I'm using a FLIR Lepton 3.5 module. The camera offers 160×120 resolution, and it's pretty hard to beat for the price. Additionally, I use a Group Gets Pure Thermal 2 carrier board, which allows me to use a interface with the camera using USB.

The most important feature of the lepton is radiometric measurement. This means that with just a few lines of code, I can extract the temperature of every pixel in the image (not all LWIR cameras offer that).

With another few lines of code we can locate the hottest and coolest spot in the image.

I decided to use Raspberry Pi Camera Module v2 for the following reasons:

Below are images taken with my device:

Below are sample videos taken by my device:

It looks like I'm being followed by my thermal ghost!

To figure out what the temperature of the subject, we first need to locate them in the image frame. I ended up creating two versions and testing two different approaches for the human detection task:

In my first approach, I used a SingleShot MultiBox Detector[1] trained on COCO dataset[2]. This lets me detect objects across 91 classes from COCO. The algorithm runs on Jetson Nano's embedded GPU at 9FPS. Below you can see an image that has a bounding box with the detected object class ("person"), the confidence score, and the temperature inferred from the IR image (in both deg. Celsius and Fahrenheit).

We are not limited to humans! With SSD object detection on-board my device can detect and measure the temperature of many common objects, like on the video below:

For the purpose of detecting fever, it is sufficient to detect faces, and not the entire body outlines of the subjects. We might even get more robust results, because the measurement will not be affected by the person's clothing. Also, in this 2008 study[4], authors identified the inner canthus (corner of the eye) as the most reliable region for contactless temperature measurement with IR cameras. That's why I also detect subject's eyes in the image.

I realized face and eye detection using a Haar Cascade Classifier. You can learn more about this algorithm from this OpenCV tutorial.

Although detection algorithm is not as versatile as SSD, I found the temperature estimation to be more accurate when we estimate from the facial region (as opposed to the whole body).

One option is to simply connect the device to a computer monitor, and we can see detected persons and their temperature on the screen. I realize that this can be inconvenient for a lot of places. That's why I also included an alarm light with this 8 neopixel stick for a much more self-contained interface.

4. Assembly. How to build your own?

I created an enclosure for my device. The enclosure is fully 3D-printable.

It is possible to export to your format of choice (.stl,.step, fusion 360) directly from the autodesk360 website. It's my first time using Fusion 360 export feature, so if something doesn't work, let me know -- I can also upload the files to thingiverse.

You will need the printed parts and also:

4.2.1. Attach the cameras and Jetson Nano to their respective baseplates. Note that the wifi antennas for Jetson Nano are optional, but can help you integrate the AI thermometer with external service (e.g. website, mobile app notifications)

FLIR Lepton camera has high momentary current draw during a shutter event. It caused my Jetson Nano to shut off a few times and I added the capacitor to avoid this in the future. If your power supply has really good filtering, you might get away without this.

4.2.3. Put together the camera assembly with the top of the enclosure

4.2.4. Screw-in the Neopixel in its dedicated spot and add wifi antennas (if you choose to include them).

4.2.5. Connect the camera ribbon (this can be a little tricky, so be careful no to damage the flat-flex cable or the camera socket).

4.2.6. Put together the top and the bottom of the case. Use the M3 screws in this step.

4.2.7. Connect the FLIR Lepton with a short USB cable and connect the device to a 5V power source (USB or barrel jack)

4.2.8. Attach to the wall with a nail or double-sided tape. I found that the height ~170cm will work for capturing both short and tall people.

Go to https://github.com/tomek-l/crowd-thermometer and follow the readme for the most up-to-date setup. You can also "cheat" a little by downloading a pre-made SD card Image from here. If you have any issues, feel free to message me or create an issue on github.

I added this notebook as a good place to start working with cameras & IR image processing.

AI Thermometer can be particularly useful in crowded places, such as:

1 / 2 • Deployment near the entrance to a building

You can simply deploy it next to your doorbell.

1 / 3 • Deployment next to the door, near the doorbell

Or quite literally anywhere you can provide 5V USB power!

Deployment on a tree, with a powerbank :)

The improvements have more to with the accessibility of the project, rather than functionality.

[3] Eddie Y.‐K. Ng Is thermal scanner losing its bite in mass screening of fever due to SARS? https://www.ncbi.nlm.nih.gov/pmc/articles/PMC7168465/