This tiny imp does it all: on-the-go player or WiFi/AirPlay streamer, battery bank or wall power, headphones or speakers.

This tiny imp does it all: on-the-go player or WiFi/AirPlay streamer, battery bank or wall power, headphones or speakers. 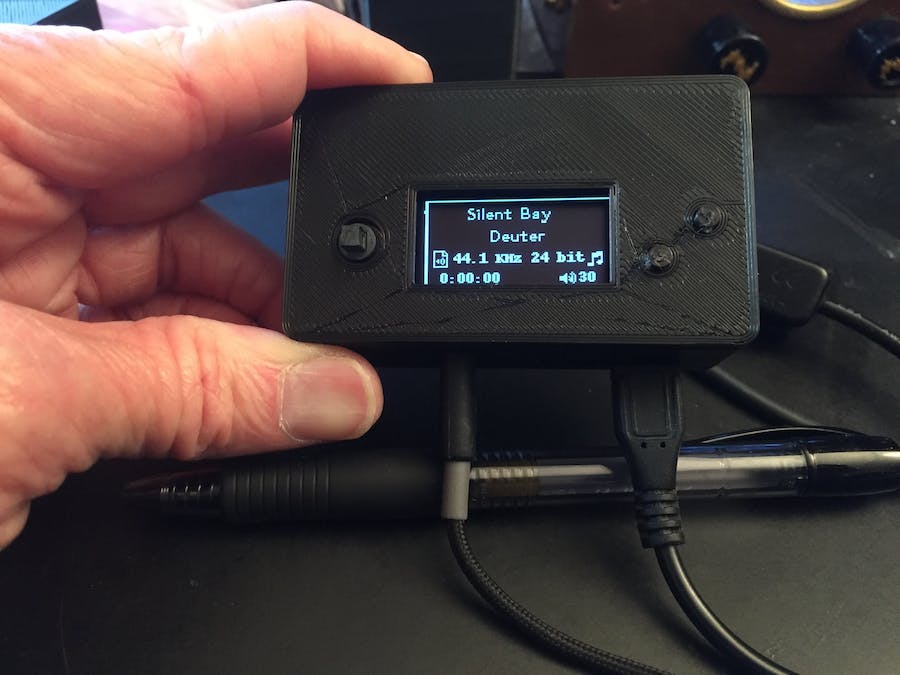 While making travel plans for the year, I thought it would be really nice to have the single, smallest possible music player to take along. Something that does it all - play from NAS or all my music direct from the device; be able to play on a long flight or walking around; hook up to a powered speaker for a (semi-) stationary player. You can even play Spotify! And do AirPlay!

Yep, you can do all this from a phone. But, I had about 100GB of music, and I enjoy total control of it.

So, the Volumio Mini Player was born. Well, "started gestation"... It took a while to think through what I really wanted. I gradually settled on the following features.

Cost: About $60 USD, not including 3D print. Does not include the cost of microSD card.

Effort: About 3 hours for assembly and configuration. 3D print times about 2.5 hours for top/case/button extenders

The contributions from the Volumio and NanoMesher teams were critical to this project. Please support these folks!

I printed the 3D components of the case in 3 separate prints, Top/Cover (1 hr), Bottom (1.5 hr) and Button Extensions (15 min). The Top & Bottom I printed with no supports, only a skirt. The Button Extensions, because they were so small, printed on a Raft.

You may have to do a little clean-up work with the hole for the 5-way switch, to enlarge it so it doesn't bind when mounted in the Top/Cover. Also, there's a tiny pin-hole on the front of the case next to the power micro USB connector. This is a port to the ACT LED. This shows when the raspberry pi Zero is completely shutdown (10 blinks, then out), so you can remove power. However, it's verysmall, so you may want to enlarge it a bit. On each of the 5-way and ACT hole, touch up with an Xacto knife or similar sharp/pointed object. The Headphone and Line-Out holes may also need a little touch-up. Because these holes are printed vertically, they tend to be oblate, a little squashed at top and bottom.

Test fit the Top/Cover to make sure it snaps on well. This may take a little work. If it doesn't snap on easily, try pushing the Bottom/Case side in and push the Top/Cover down firmly at the same time.

Check that the button extensions move freely, don't bind. You may have to clean up either the shaft of the extension, or the hole, to get good movement. Don't remove too much!

Download the software from the Volumio Getting Started page. Use the instructions for Flashing, choosing your favorite operating system. Follow along on the Getting Started page to the "Prepare It" section. But, you won't be using an Ethernet cable to connect to Volumio as it says. Once the software is loaded on your microSD card, insert into the pi Zero and boot up.

On boot, Volumio will start a WiFi hotspot/hostap. This can take about 6-8 minutes, so be patient! You then connect to the hotspot from a WiFi enabled computer, tablet or phone. On your device connected to the hotspot, go to the volumio.local web page, as described in the "Connect to It" section, to complete set up. You can connect to your own LAN later on in the setup from the web page.

Once you connect, Volumio will walk you through the remaining setup via a "first time wizard". There are 6 steps to get started. Additional required plugin configuration steps follow after the setup is complete.

To install the NanoSound Plugin:

Then, you call follow along from the NanoSound Support page/Method1 to complete the installation. Most important: remember to Enable the plugin! Go to System/Plugins/Installed and set the switch ON.

To configure the GPIO buttons:

Enter and save the following values:

Also remember to Save the GPIO Plugin values.

Go to volumio System/Shutdown/Restart. If all is correct when the system completes reboot, you will see a screen similar to above, displaying volumio's local IP address from your WiFi system (not the volumio hotspot). Make note of this address, needed for more configuration changes. We'll use ssh for that.

To enable an ssh connection on volumio:

Next, do this to set the pullup on the GPIO pins that are being used for buttons/5-way Navigation:

Reboot again, to run the pullups.

Note: The pullups will be effective immediately if you run each one from the command line, saving you a reboot:

The photo above shows the positions and functions of the 5-way Navigation switch and Volume buttons.

You can plug in headphones to the black jack or an audio line out to the green jack from the JustBoom DAC.

To check that the user interface is working properly, go to volumio.local from a browser. Use the Browse tab to pick a music source. If you don't have one set up, try a Web Radio.

Add a Web Radio to the play queue

The Playback browser screen updates almost instantly. The OLED screen can take up to 2-3 seconds to react to a change, such as volume up or down.

To change the Volume Steps, how much the volume changes at one time, go to Settings/Playback and scroll down to Volume Options. Change the value for "One Click Volume Steps".

Of course, you can still control volumio through its web page, too! Just point your browser at the IP address from the startup screen or volumio.local. It may take a moment to refresh.

On first boot, volumio will resize the file system to use the available space on the micro-SD card. All available space will be added to partition #3, the data partition which has the INTERNAL folder for local music. I used a 128GB microSD card. Resizing this large a card will take a very long time.

For the Impatient: Gparted

I originally installed volumio on a 16GB card. I then created a disk image backup file on my computer, using that as the source. I restored that *.img file to my target 128GB card using a USB card reader. This step does take a long time, mine was 50 minutes - be patient. Finally, I expanded partition #3 with the gparted tool. While that sounds like a lot of work, it only took about 15 minutes to expand.

The following shows how to do this in Linux. For Windows, Pi Hut has a good set of instructions.

Note: There's no number after sdX, which means it writes from/to the entire SD card. Also, you need to have enough disk space on your computer to hold the file (*,img).

Volumio exposes a folder called Internal Storage as a Windows share. You can browse to this folder and save music to it over the network.

However, for moving a large number of songs, that can be quite slow. If you have your music on a computer with a USB-3 port and a USB-3 micro-SD card reader, it is faster to move it from computer to SD card. In Linux, the mount point would be something like:

It took about 50 minutes to load 100GB of music onto the microSD card using a USB-3 card reader connected to my computer with the music library.

Take it on the Road

Early in the project, I considered an all-in-one case that would house the board stack, a LiPo battery and battery charger. That would be nice for an "everyday carry" device. But, it would also make the device very thick and not that "pocketable". Besides that, adding a battery charger and LiPo battery could increase the project cost by as much as $35 USD more, and I wanted to keep the cost down.

Keeping the device as thin as possible and using a mass-produced battery bank seemed like a better alternative. I settled on the Anker PowerCore+ Mini, as of this writing about $16.99 USD for black, 3350mAh. This was more versatile for my use case - I could hook it up to the Volumio Mini Music Player when I wanted to carry/take it around, or I could just throw it in my messenger bag and use it for recharging my other devices.

I did a run-down test of the PowerCore+ by continuously playing a very large playlist, while hooked up to a portable speaker. The PowerCore+ uses different colored LEDs to indicate power remaining on the unit. It played for about 7.5 hours before the LEDs indicated between 50% to 20% power. I likely could have played much longer without recharging. Good enough!

And, though two pieces and not all that small, the Music Player and PowerCore+ combination fits in my pants pocket.

In the end, I achieved my goal of a small, versatile device that I can take on a hike or an airplane; play by the pool; take camping; play on the commuter train; quickly set up in a hotel room, connected to WiFi or not; play my music collection or stream.

11 projects • 20 followers
A specimen of Homo Sapiens, which is an unintentionally ironic name for the species.
ContactContact
Thanks to Volumio Team and NanoMesher.