An on/off switch for Raspberry Pi using a Trinket and a PowerBoost 1000 (from Adafruit).

An on/off switch for Raspberry Pi using a Trinket and a PowerBoost 1000 (from Adafruit).

This article is about an RPOf circuit for the Raspberry Pi using a Trinket, thus a tRPOf. The main difference from previous ones, is that this project uses a standard Adafruit Trinket as microcontroller instead of the MSP430 in order to use "off the shelf" components with less effort of programming. Compared with the first RPoF circuit based on the MSP430, this one uses only two main off the shelf blocks and a minimal external components: the Trinket and the LiPo charger that acts also as relay. Because the use of the battery, the circuit acts also as a UPS and using the right battery can power a Raspberry for few hours as well without the need to have an external power supply.

The Trinket controls the output of the DC/DC converter (enable pin). The converter acts also as battery charging when a power supply is applied.

The tRPOf will performs these activities:

For the project, we'll use :

All the five available I/O will be used. All of them will be set as I/O :

The pushbutton is connected to a pull up and to the ground.When pushed the input go low. The function for debounce also invert the reading. Basically when the signal goes high exit immediately signaling low goes low waits few minutes, then check again and if still low, waits for the signal to go back high again and then return notifying high.

The LED is connected to the ground and to the output, so forcing the output high set the LED on.

The shutdown command is active low, so normally is high and goes down when the Raspberry has to shutdown.

The PowerBoost enable signal, on the PowerBoost, is pulled up from the PowerBoost main power. This is normally 3V when only the battery is connected. When the USB is also connected for charge, it's 5V. Because of that is necessary to use a transistor to control the enable on the booster and thus the logic is negated.

The PowerBoost enable is normally high (high to the transistor base, means grounding the enable pin on the PowerBoost) and goes low when the 5V need to be applied to the Raspberry.

After the bootstrap, the state machine is in the state STEADY_OFF. When pressing the pushbutton, the power is enabled, the LED is set to flash slow and the shutdown command is in running mode (high) then the state is changed in WAIT_ON.

In this state nothing happens until the reading of the shutdown feedback indicate the Raspberry is running. When this happens the state is changed in STEADY_ON setting the LED On (not flashing).

In this state a press of the pushbutton cause the shutdown command to go low and the LED is set to flash fast, then the state is changed in WAIT_OFF.

When the shutdown feedback goes low indicating the Raspberry completed the shutdown, the last state, LAST_DELAY, is engaged to give 7 more seconds of wait time before the power is removed (for safety), then the LED is forced OFF and the state return to STEADY_OFF.

The code is available on Bitbucket.

On the Raspberry Pi two I/O pins need to be used. One will check if the line goes low and when this happens, start the shutdown sequence. There is a python code from Adafruit for this purpose used in the NiRis project, so since this project is mainly used for NiRis the GPIO is the one set for the same purpose in NiRis, GPIO4.

I decided to prepare a PCB to host the Trinket and the converter plus the components needed.
The PCB is public domain (https://easyeda.com/TheFwGuy/rPOf-support-board) and so it can be easily duplicated. 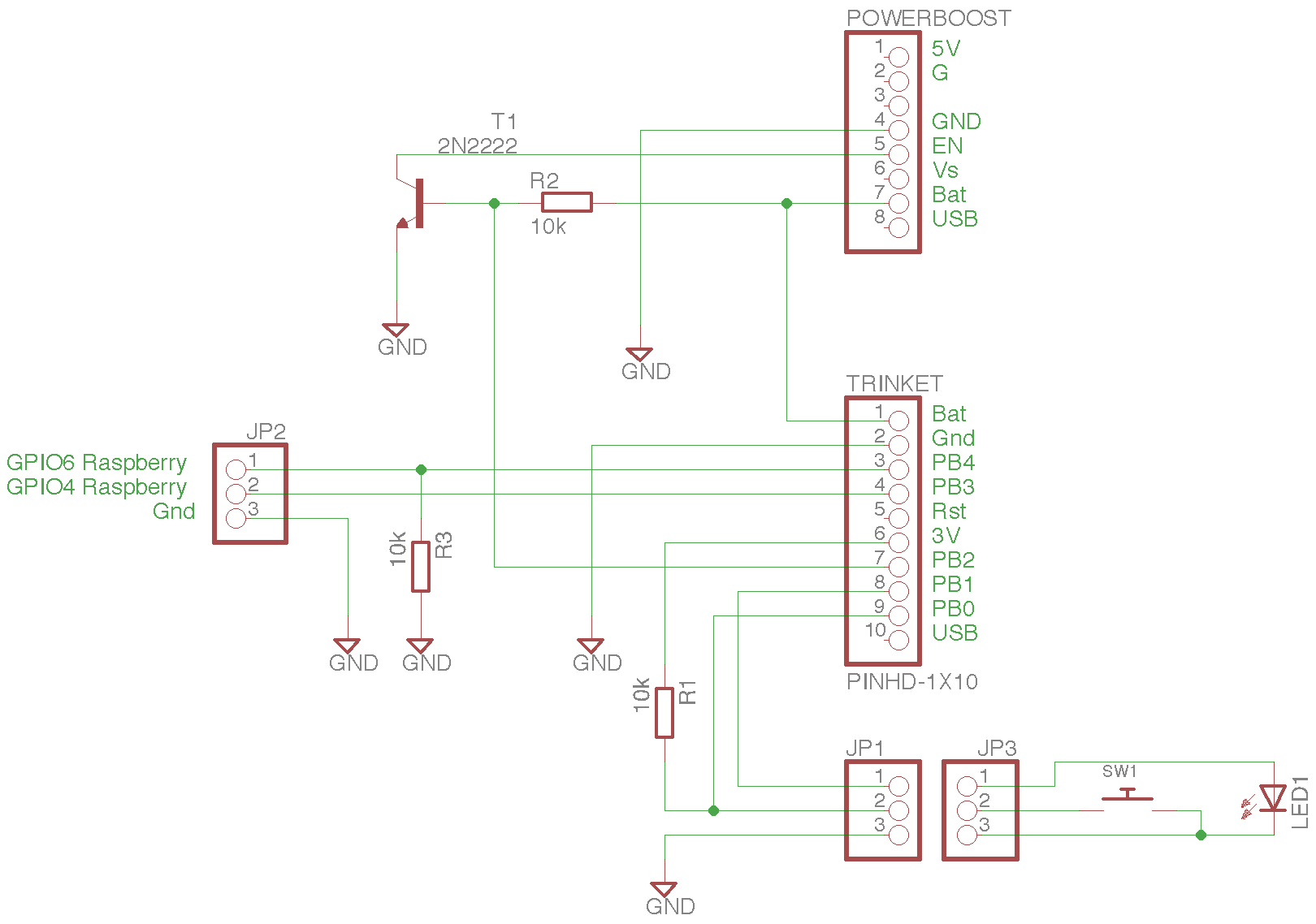 2 projects • 2 followers
A Firmware developer in Arkansas who love to read, who love music, curious by nature, free thinker by learning.
ContactContact