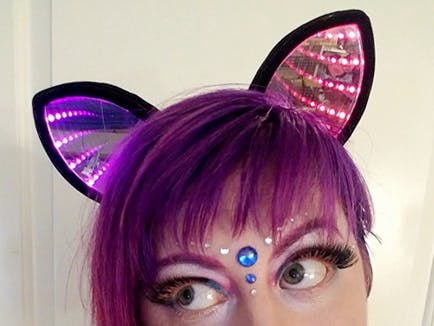 I built this project on a cat ears headband bought at my local mall. I traced the inside of the ear shapes, then scanned into my computer and outlined using Adobe Illustrator. This file was used to laser cut a front mirror out of one-way mirrored acrylic inset in a black acrylic frame and a standard mirrored acrylic piece for the back.

Fitting the pieces in the headband

After confirming fit and cutting down some Skinny NeoPixel Strips to length, I soldered the strips together leaving room to run wire between the ears and extra to solder to the Trinket M0 I would be using to control them. The LED strips were placed in between the two mirrors and glued in place.

Assembling the ears. I cut notches in the back mirrors to allow space for the wires to thread through.

I placed a Trinket M0 and LilyPad Simple Power on the back of the right ear (start of the LED strip) and cut wires down to size and soldered the final pieces together. After programming in Arduino using the NeoPixel library's functions, I hot glued the boards and wires in place.

After testing and making sure everything was secured, I wrapped the back and sides of the ears in black velvet, leaving holes cut out to access the two USB ports for programming and charging.

A small hole was cut around the power switch on the LilyPad Simple Power to allow access.
Read more