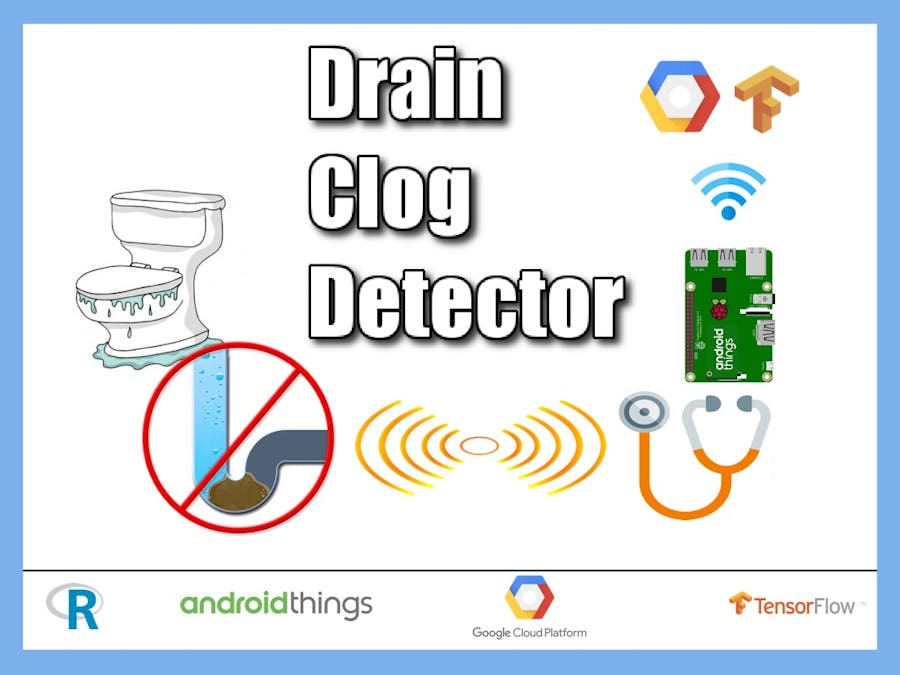 Don't let a clogged drain slow you down!

Coming back from our vacation, me and my wife were surprised by the water covering the floor of our apartment, and we found out it's not even clean water, it's drain everywhere. After clearing the drain and cleaning the floor, I had this question: why don't we have an alarm system for potential drain clogs?

Clogged drains not only can bring your home to a halt, but will consume additional costs from your pockets, $206 on average is cost of clearing a clogged drain according to HomeAdvisor, in addition to hidden costs of damaged carpets, wooden furniture, ... etc.

Our idea is to let home owners as well as enterprises like city/compounds maintenance departments and specialized service providers to have an efficient and intelligent system that alerts whoever in charge as early as possible to take action, which contributes in enriching smart cities with an important feature.

Although detection of clogs can be done through a number of techniques, like using gas sensors or internal mechanisms, our team was focused on using sound as our input, as we know that knocking on a tube where it's opened is different sound from that happened when being closed.

According to this simple concept, if we can train a model the sound patterns occurring on tube surface during clogs as well as those patterns occurs in opened pipes, we can then apply the model to detect proactively when a clog starts to compose, and we then ring some bills.

3 phases are implemented in this project: gathering data, learning & prediction.

Before applying this system in real life, we needed to create an enforced simulation environment, where we have the pipe, flowing water, and somehow to simulate the clog. So, we got a tube, a water hose with a water source doing this in the bath tub, and using the tub surface to close the tube which represents the clog.

In this video, we explain how we built the environment and how we collected data for the model training.

And in this next video, showing how we did the testing for the system and the model, in open mode, then in clog mode and back to open mode, however

So, lets explore our implementation step by step:

In this scenario we use a small water pipe connected to our hardware and sound sensor. Hardware reads the sensor value and send it back to Cloud.

To detect the water sound inside the pipe we need a sound sensor. However Raspberry Pi 3 doesn't have Analog GPIO. To handle this issue we use Arduino as Arduino has analog GPIO.

To get more information about Grove Sound sensor, you can check its data sheet. You can find in data sheet a sample code how to read sensor values. Sample Code is almost use will small changes.

To download android things on Raspberry, you can download the latest version from Android Things Console. In this project we use version: OIR1.170720.017. follow steps in Raspberry site to install operating system on raspberry, for windows you can use these steps

After getting the IP, connect to your Raspberry using below command:

To connect your Raspberry to Wifi (add your SSID & password):

Google offers a free tier for all users for one year with ceiling of 300$. Thanks to Google :).

Follow the below screens to create new project in Google Cloud:

Google Cloud Pub/Sub is a fully-managed real-time messaging service that allows you to send and receive messages between independent applications. follow below screen to create new topic.

A fully managed service to easily and securely connect, manage, and ingest data from globally dispersed devices. IOT Core still Beta, to have access on it you need to make a request with Justification to Google. We made the request, our justification was this contest. Google approved, Thanks to Google again :).

Cloud Functions is a serverless environment to build and connect cloud services. Trigger for this function is the Pub/Sub topic that created in step 1.

Google Cloud Datastore is a NoSQL document database built for automatic scaling, high performance, and ease of application development. While the Cloud Datastore interface has many of the same features as traditional databases, as a NoSQL database it differs from them in the way it describes relationships between data objects.

No need for any setup as once the Cloud Functions write sensor values to DataStore, data will be added to DataStore as below screen

We gather a sample 10 min from normal pipe & 10 min from blocked pipe with difference exactly 1 hour between the 2 iterations. After downloading data DataStore and make some manipulation to add classification for each row. Now we have 2 csv files one for each category. As best practice upload data CSV files first to Cloud Storage. In below screen we create a new bucket & upload the 2 CSVs files

As this bucket will be used for analysis only, no need to choose Multi-regional bucket.

Then create new Dataset & new table in BigQuery and upload the 2 CSVs file from bucket to the new table.

Then we use Data Studio to draw some insights. Data Studio will read data from BigQuery table.

From graphs we can see the difference between 2 categories in number of telemetries and sum of values per minute. Based on these insights we can design a simple model, pipe is considered blocked if

To create new android things project, you can check those samples. Especially below samples

To be notified when an external USB device is attached to the Android device. This can be done adding a new intent-filter entry to MainActivity that should be started by the system when a USB device is plugged in.

To ensure that you will be notified only when Arduino is connected to USB and not anything else, add new file in res folder "xml/device_filter.xml". Arduino Vendor ID is 9025.

The following code will ensure that only data received from Arduino on USB port is considered.

To open a serial connection between the Arduino and the Android device, we use felHR85’s USBSerial library. Below code to initialize the USB port, as you can see we use the same BaudRate = 115200.

Expected data received is a number, so we discard any empty or non numeric values.

In phase of Gathering sensor data, we will need to send data to Google cloud. We follow this example.

Set below information based on IDs & names created in Google Cloud

To register the device and enable it to receive data, we need to extract Public Key from Raspberry. The below code will save Public key of Raspberry:

This Public key will be saved on file called "cloud_iot_auth_certificate.pem", to move this file from Raspberry to your computer. This will move the file to:

To set Public key for created device in Cloud, use the below command:

When Raspberry reads sensor values, it sends those data to cloud.

We had 2 models can be used:

As we have 20 minutes of readings, 10 for open mode, and 10 for clog mode, each minute of data was stored in different file and was represented by a vector, and labeled with matching mode, each file contains 60000 readings (60 seconds * 1000 milliseconds).

In the below code, classifier matrix w & w0 stored in wClassifiers & w0Classifiers, which then used in validation over a 6 minutes of data (3 open & 3 closed).

As the model created and tested, we can move it to TensorFlow as a "SavedModel" using implementation in Python, after exporting it to a MetaGraph.

The following code used to build a SavedModel:

Then model need to be deployed on Google Cloud Platform Console as follows:

By creating the model version and pointing "Source" to training artifacts stored in Cloud Storage, the new version appears in versions list to be called and serve.

In prediction phase, Raspberry read sensor data and use tensorflow generated model (as a result of training) to detect if the pipe is blocked (turn the LED ON) or not (turn the LED to off).

To initialize the LED

below code will execute tensorflow model and turn LED ON/OFF based on model output.

tensorflow model file "optimized_har.pb" will be saved in assets folder

B. Time-series model, count of telemetries per minute

We refer to a reading, when it exceeds a certain value (THRESHOLD_VALUE ) which was set to 350 that filters noise and lower water flow rates in the tube, from being considered as a reading

Data analysis shown that in open mode the number of readings is less than 100, but in clog mode, values are far higher (reached 900 per minute), but in rare cases were also less than 100. However, these cases are not repeated consequently, and for three consequent minutes, total number of readings always exceeded 350. Having open mode in same three minutes will sum up less than a 300, we could confidently put this rule:

We found maximum value reached in open mode doesn't exceed a certain value (SPARK_VALUE) which is found to be 770, so we added this rule:

Combining both rules, gave us an easy way to implement the detection logic, as shown. Notice that below code was deployed on Arduino which then evaluates the received telemetries based on our model and send to raspberry if pipe is clogged or open.

In Raspberry, the below code will show how we can switch from gathering data mode to prediction mode:

The code below will turn the LED on or off based on received input from Arduino: